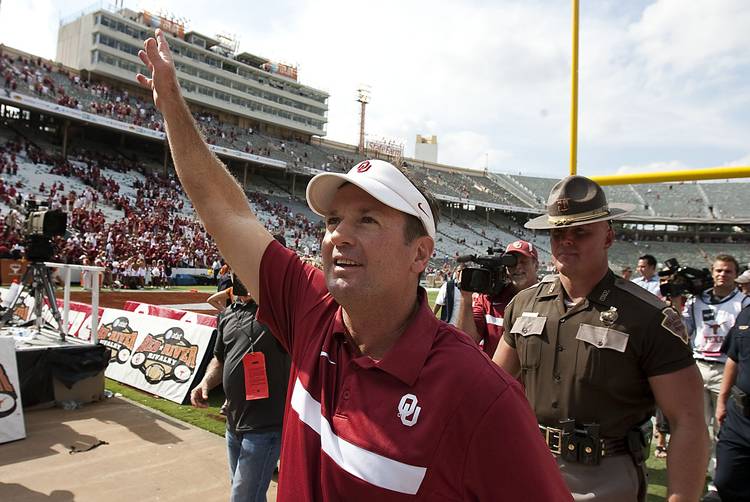 Recruiting experts have considered this a down year for teams in the Big 12.

Oklahoma, the two-time defending conference champion, stayed prominent. But Texas, with a new coaching change, toppled in the rankings.

Here’s our annual look at how the Big 12 fared:

Biggest star: Justin Broiles was rated as the 79th best player in the country by 247Sports. He also was viewed as the sixth-best cornerback in the country.

Reasons to gush: The Sooners were the convincing winners in Big 12 recruiting. Most services listed OU in the nation’s top 10. No other teams were in the top 20. If the recruiting rankings were accurate, the Sooners will have a significant talent advantage.

First to play: If it’s not Broiles, look for safety Robert Barnes, a four-star standout from Southlake Carroll, to see early action.

Needs addressed: The Sooners needed running backs and receivers after losing three dynamic players — Dede Westbrook, Joe Mixon and Samaje Perine. And on paper, they signed some vaunted prospects. Trey Sermon is an early enrollee and four-star running back from Georgia. Richmond Foster’s Cede Lamb is a four-star receiver.

Biggest star: Shawn Robinson is a four-star quarterback from DeSoto who’s on track to fit in nicely in the Big 12. The 247Sports composite rates him as the seventh-best dual threat quarterback in the country. He was Gatorade’s player of the year in the state of Texas.

Reasons to gush: Nine players were given a four-star grade by at least one recruiting service. Two of the consensus four-stars were receivers Jalen Reagor and Omar Manning.

First to play: Defensive tackle Corey Bethley is the highest-rated defensive prospect. He also was pursued by Texas A&M and Oklahoma. But keep an eye on this guy — Ni’Jeel Meeking signed as a linebacker/defensive end. But he also played offense in high school, running for 835 yards last fall, and caught four passes.

Needs addressed: The Frogs needed an injection of offense, especially at receiver. They signed six. Reagor was rated by ESPN as the sixth-best receiver in the country and the No. 43 overall prospect. He considered OU, Alabama, Baylor and Notre Dame. His father is Montae Reagor , the former Texas Tech All-American defensive end and a nine-year NFL veteran. Manning was an Under Armour All-American with a bevy of impressive offers.

Biggest star: Westlake quarterback Sam Ehlinger, at No. 14, was the highest rated player the Longhorns signed on the American-Statesman’s Fab 55. He’s on campus and will go through spring practice with the hopes of pushing Shane Buechele for the starting spot. Ehlinger’s most impressive trait is how smart he plays. He threw for 81 touchdowns with only 13 interceptions.

Reasons to gush: Texas’ class didn’t get the highest national grades. But those ratings are weighted toward how many players a school signs. Of UT’s 18 signees, seven of them were considered four-star prospects.

First to play: Gary Johnson is considered the top-rated junior college linebacker in the country. He fills a huge need. Get him on the field.

Needs addressed: New coach Tom Herman is anxious to involve a tight end in his offense. He signed two. Reese Leitao is intriguing, given his experience is more in basketball than football. The Longhorns also landed Lake Travis’ Cade Brewer, who was rated as the best pass-catching tight end in the state.

Biggest star: Xavier Newman is an offensive guard rated as a consensus three-star. He’s listed as the 20th-best guard prospect in the country.

Reasons to gush: The new staff was able to flip the pledges of a dozen prospects. Coach Matt Rhule was able to lean on his ties back east and went toe to toe with Big 12 and SEC programs. One of the flips was Lake Travis quarterback Charlie Brewer, the Associated Press’ high school player of the year. Brewer already is in school. He’d been committed to SMU.

First to play: Cornerback Harrison Hand was committed to new Rhule when Rhule was at Temple. Hand is rated by Rivals as the sixth best cornerback prospect in the country and No. 16 by 247Sports.

Needs addressed: The Bears needed positive energy and a ton of players. They got both. When Rhule was hired in December, Baylor had only one commitment and the old staff hadn’t been recruiting. The Bears signed 27.

Biggest star: Tylan Wallace of Fort Worth South Hills is the top-rated recruit in the class. The 247Sports composite lists him at No. 117 overall. His twin brother Tracin also signed with the Cowboys. Tracin played quarterback in high school, but he dealt with a severe knee injury the past two seasons.

Reasons to gush: It’s the 6,000 club for the Cowboys. Chuba Hubbard, who is ranked as the top prospect in Canada, rushed for 6,880 yards in his career. Then there’s J.D. King, who ran for almost 6,000. Both could vie for playing time with sophomore Justice Hill, who will miss spring practice to recover from shoulder surgery.

First to play: Linebacker Patrick Macon was the National Junior College Athletic Association defensive player of the year. It’ll be difficult to keep him off the field. He had 122 tackles, with 27.5 of them for losses.

Needs addressed: The Cowboys may have signed their quarterback of the future in Jalani Woods. He’s listed as a dual-threat quarterback and played for a high school that runs a similar offense as Oklahoma State. It’s his size that makes him so intriguing, since he’s listed at 6-7, 230 pounds.

Biggest star: Offensive guard Jack Anderson was ranked as a four-star prospect. The Frisco star was listed at No. 76 overall on the 247Sports composite. Even Alabama wanted him. He also has the honor of being the highest-ranked player signed by any Big 12 school.

Reasons to gush: There have always been concerns about Tech’s quarterback depth. With Patrick Mahomes’ early departure to the NFL, Tech signed two quarterbacks, including Cibolo Steele’s Xavier Martin. He’d been committed to Tech since last summer and he’s rated as the 13th-best dual threat quarterback in the country. The other is former Gilmer star McLane Carter, who transferred from Tyler Community College. Both are enrolled and will go through spring drills.

First to play: Dakota Allen is a familiar prospect to Tech fans. He was the team’s second-leading tackler two years ago, but was suspended after a burglary arrest. After completing a pre-trial diversion program and spending the year at a junior college, Allen is being welcomed back.

Biggest star: Hometown star Derrek Pitts already is enrolled in school. The safety is one of two four-star players in the class.

Reasons to gush: WVU’s class wasn’t up to its usual standards, but coach Dana Holgorsen said the group must include a guy already on campus, quarterback Will Grier. The one-time starter at Florida was suspended for taking a banned supplement. Back in high school, he threw for a national record 837 yards in a game.

First to play: Quondarius Qualls is already on campus. The outside linebacker from Northwest Mississippi Community College was rated four-star prospect from Scout.

Needs addressed: The Cyclones signed five offensive tackles, the biggest of whom was Robert Hudson, who’s listed at 6-7, 333 pounds. The one-time Purdue pledge has trimmed down from 440.

Biggest star: The Wildcats got a late commitment from linebacker Daniel Green, a one-time pledge to USC who also considered Ole Miss. He’s a four-star prospect from Portland, Ore.

First to play: Elijah Walker is considered the top-rated safety in the JUCO ranks. He’s already on campus.

Needs addressed: Bill Snyder wanted to shore up his defense and offensive line. He signed three of the top four rated offensive linemen in the state of Kansas and eight of his top 10 highest-rated signees are defensive players.

Biggest star: Running back Dom Williams, a long-time commitment to Kansas, was viewed as a four-star by Rivals. He committed in September 2015 and was wooed by Baylor, Arizona State and Boise State.

First to play: Hasan Defense. He’s the highest rated defensive prospect in Kansas’ class. Defense is a cornerback who transferred from Kilgore Community College. And yes, he has the right name to be a defensive star.

Needs addressed: The Jayhawks need speed, depth and lots of offense. Maybe that’s why they went so heavy on receivers (five) and running backs (two).