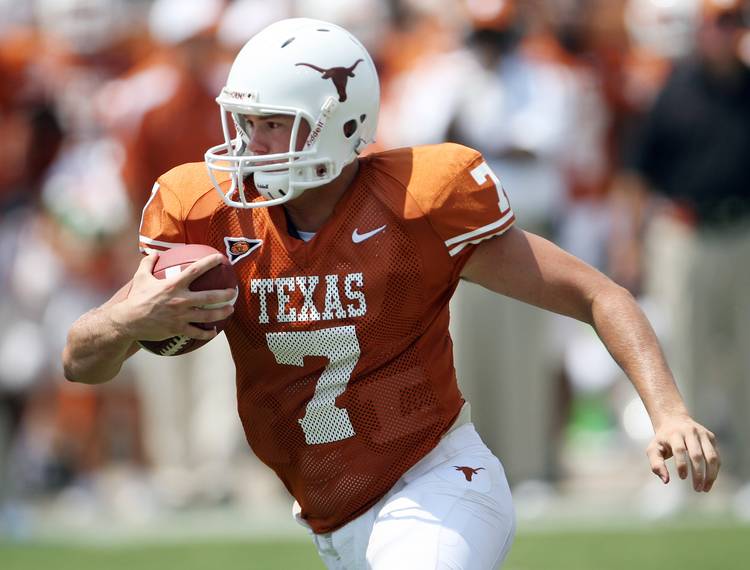 Austin police are investigating the overnight death of former Texas and Ole Miss quarterback Jevan Snead, but police were releasing few details about his death Sunday.

Austin-Travis County Emergency Medical Services officials said authorities responded to a call at 9:08 p.m. Saturday for assistance to enter a locked apartment or car in the 1200 block of South Congress Avenue. Medics went to the scene for what officials described as “an obvious DOS” (dead on scene).

According to Snead’s LinkedIn profile, he was working in Austin recently. He was 32.

“Very sad day with news of the passing of former Texas QB Jevan Snead,” UT officials posted on the school’s football Twitter account. “Our thoughts and condolences are with his family and friends during this difficult time.”

Snead was ranked the second-best dual-threat quarterback in the nation when he first committed to Florida but flipped to Texas on Nov. 13, 2005. It was a major recruiting coup for then-Texas coach Mack Brown.

Snead was ranked 11th on the American-Statesman’s Fab 55 and considered the program’s biggest quarterback recruit since Vince Young.

“I’ve talked with the coaches and they said that if Young leaves, I’ll get the chance to compete for a starting spot,” Snead told the Statesman in January 2006.

Snead enrolled that month so he could get a jumpstart on learning the offense. Another quarterback, a redshirt freshman named Colt McCoy, had eyes on taking over for Young, too. “Whoever is starting, we’re going to be very good,” Snead said during his first preseason camp.

Both quarterbacks ran a zone-read, shotgun-style offense in high school. On Monday before the 2006 season opener against North Texas, Brown named McCoy the starter.

Snead would appear in eight games his freshman season as McCoy’s career took off. Snead’s best game at Texas would come against Kansas State. He completed 13 of 30 passes for 190 yards and threw one touchdown in a 45-42 loss in Manhattan. The only reason he played was because McCoy felt pain in his shoulder on the opening possession.

On Nov. 30, 2006, the Statesman reported that Snead asked Brown for permission to transfer, although Snead wasn’t sure where he would go. Brown told Snead to sleep on it. Eventually, Snead announced he was transferring to Mississippi. McCoy would become one of the best quarterbacks ever at UT.

Snead went to Ole Miss and, after sitting out the 2007 season, won the starting job in 2008. He threw for 2,762 yards and 26 touchdowns as a sophomore. Snead enjoyed a similar season in 2009, throwing for 2,632 yards and 20 touchdowns. Still, he was viewed as too inconsistent.

Snead still had one more year of eligibility left and was told by the NFL draft advisory board to go back to school. Still, Snead went pro in 2010 and was not drafted. He was signed by the Tampa Bay Buccaneers as an undrafted free agent but got cut.

“It didn’t go exactly the way I had hoped, but I’m here now. I’m here to make the best of it,” Snead told the Associated Press in late April 2010. He never appeared in an NFL game.

In 2011, Snead signed a contract to play with Tampa Bay’s arena football team but was later released.