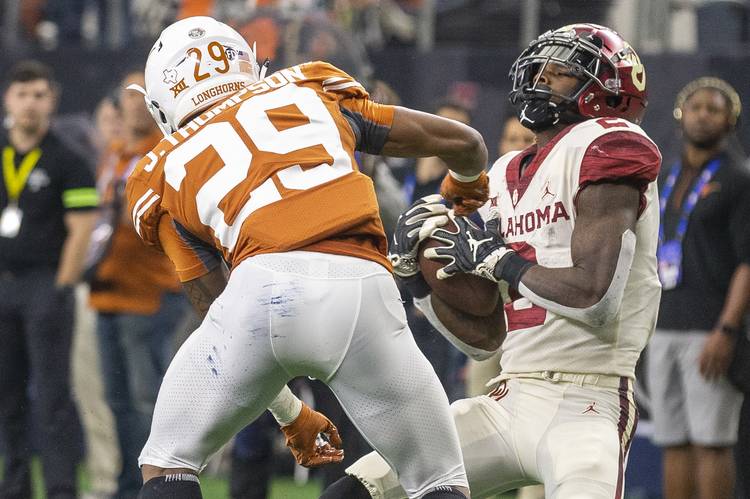 Texas defensive back Josh Thompson (29) interferes with wide receiver CeeDee Lamb (2) after he signaled a fair catch at AT&T Stadium in Arlington on Dec. 1, 2018. [Stephen Spillman for Statesman]

ARLINGTON — For the Longhorns on Saturday, the only color more loathed than crimson may have been yellow.

Texas was penalized 13 times in Oklahoma’s 39-27 win in the Big 12 championship game. Those penalties resulted in 128 yards. The Longhorns hadn’t been flagged so many times in one game since a 16-penalty game against Oklahoma State in 2015.

Meanwhile, Oklahoma was flagged only five times for 60 yards.

The Longhorns had committed only 13 times in their three previous games.

“The penalties killed us,” safety Brandon Jones said. “You can’t blame the refs. They have a job just like we have a job out on the field. Whatever they see, they have to call. It is what it is.”

Texas coach Tom Herman has said throughout this season that he’ll accept aggressive penalties. It’s the other ones that irk him. Sure enough on Saturday, Texas was flagged for a couple of false starts and another one of its patented post-kickoff delay of game calls.

The aggressive penalties, however, proved much more costly.

On Oklahoma’s first drive — which ended with a short field goal — UT cornerback Kris Boyd was twice called for a facemask. He also committed a 15-yard pass interference penalty on another first-half scoring drive. The all-conference honoree had an additional personal foul that was offset by a holding called on Oklahoma in the second half.

Boyd was not the only Longhorn who ran amiss of the referees. An offensive pass interference on Collin Johnson thwarted a scoring threat. A facemask on Breckyn Hager killed the clock for the Sooners, who were out of timeouts, on an 80-yard touchdown drive that spanned only 41 seconds at the end of the second quarter. A Jones pass interference penalty preceded a Sooners score on the opening drive of the second half.

Special-teams savant Josh Thompson was called for holding on a fourth-quarter kickoff, wiping out Lil’Jordan’s 92-yard touchdown return. And he was flagged for interfering on a Sooner’s catch of a fourth-quarter punt that would have pinned OU at its own 5-yard line.

Said Texas defensive tackle Chris Nelson: “Penalties are never good, hurts the team. But we are going to look on and correct it and (learn) more forward from it.”

Texas was averaging seven penalties a game heading into Saturday, and their average of 58.8 penalty yards a game ranked 84th in the country. The Longhorns have committed double-digit penalties four times this season. Three of those games have been losses.

“I just feel like we’ve got to (address) that at practice,” linebacker Anthony Wheeler said. “Take practice like it is game reps.”

In a role reversal, it was Oklahoma’s defense that made the big plays this time