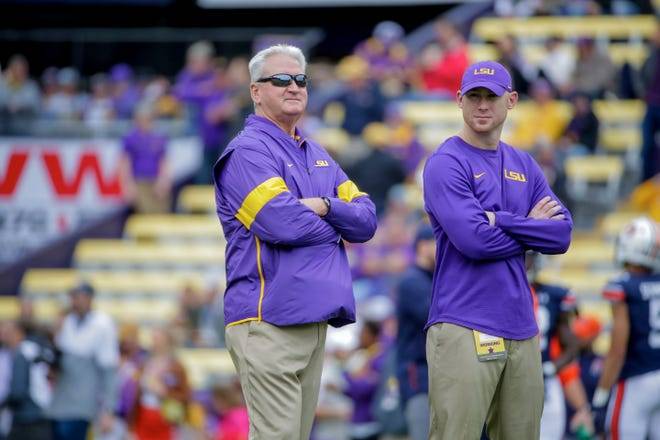 Since being hired away from the New Orleans Saints last January, LSU wide receivers coach and passing game coordinator Joe Brady has revamped the Tigers’ offensive scheme, helped mold the runaway Heisman Trophy favorite in quarterback Joe Burrow and played an instrumental role in the program’s surge to the top of the College Football Playoff rankings.

And he’s done all of this while drawing a salary of $410,000, the third-lowest among assistants on coach Ed Orgeron’s staff. In terms of drawing bang for the buck, no coach in the Football Bowl Subdivision comes close to matching Brady’s impact.

Part of the reason behind Brady’s relatively small payday was his lack of experience. A former walk-on wide receiver at William & Mary, Brady began his coaching career with two seasons as the linebackers coach at his alma mater (2013-14) and another two years as a graduate assistant at Penn State (2015-16) before joining the Saints, where he spent the 2017 and ’18 seasons as an offensive assistant.

A raise will come this off-season, especially given the number of big-name teams in the market for an offensive coordinator. For example, Texas recently began to overhaul its coaching staff after a disappointing season.

After all, Brady has provided the spark behind LSU’s sudden leap to the front of the SEC. Consider this impact: The Tigers have thrown 49 touchdown passes in 2019, three more than during the previous three seasons combined. LSU’s offense ranks first nationally in yards per game and third in scoring and yards gained per play.

Few assistants, if any, have played a bigger role in determining the makeup of this year’s championship race, and on Tuesday, Brady was named as the winner of the Broyles Award, which annually goes to the nation’s top college football assistant coach, as selected by a panel of media members and former coaches.

Five other assistant coaches in the same mold:

Bates’ crowning achievement came in 2018, when all four of Clemson’s starting defensive linemen earned either All-America or first-team all-conference honors while three eventually landed in the first round of the 2019 NFL draft. Despite that loss of star power, Clemson enters the postseason ranked ninth in the FBS in yards allowed per carry and tied for sixth in rushing touchdowns allowed. Bates is also a key piece of the Tigers’ recruiting machine: Clemson has verbal commitments from three of the top seven interior-line prospects in the country, including the nation’s top overall recruit.

Silverfield has been the Tigers’ line coach during the most fruitful four-year run in program history, culminating in this season’s conference championship and Cotton Bowl berth. What role he fills next season remains to be seen: Silverfield is a contender to replace former coach Mike Norvell, now at Florida State, and will be the Tigers’ interim coach during the postseason. Despite returning only two starting linemen in 2019, Memphis enters bowl play nearing program records in scoring and total offense. Silverfield is also viewed as one of the top recruiters in the American Athletic Conference.

Minnesota has made enormous gains in each of Ciarrocca’s three seasons as offensive coordinator, going from 118th nationally in yards per play in 2017 to 30th during this year’s unexpected push for the Big Ten championship. The 2019 offense had an eight-game run of scoring 31 or more points, the program’s longest such streak since 1904. In his work with Golden Gophers quarterbacks, Ciarrocca helped sophomore Tanner Morgan lead the Big Ten in yards per attempt and finish second to Ohio State’s Justin Fields in touchdowns and efficiency rating.

The lowest-paid assistant on the Ohio State staff, Hartline has been the Buckeyes’ most prolific recruiter since being promoted into an on-field position before the 2018 season. He’s responsible for five verbal commitments in the 2020 class, including the nation’s top receiver prospect, while bringing stability to a position group that often failed to match expectations. This year’s receiver corps features five players with at least 21 receptions.

An off-field assistant before being hired at San Jose State in 2017 — he previously spent time in the personnel departments at Oregon State and Nebraska — Gunderson was nominated for the Broyles Award as the nation’s top assistant after developing senior Josh Love into the Mountain West Conference offensive player of the year. The Spartans capped the regular season ranked fourth nationally in passing yards per game while falling just one win shy of bowl eligibility. Not bad for an assistant drawing a salary well below the national average.