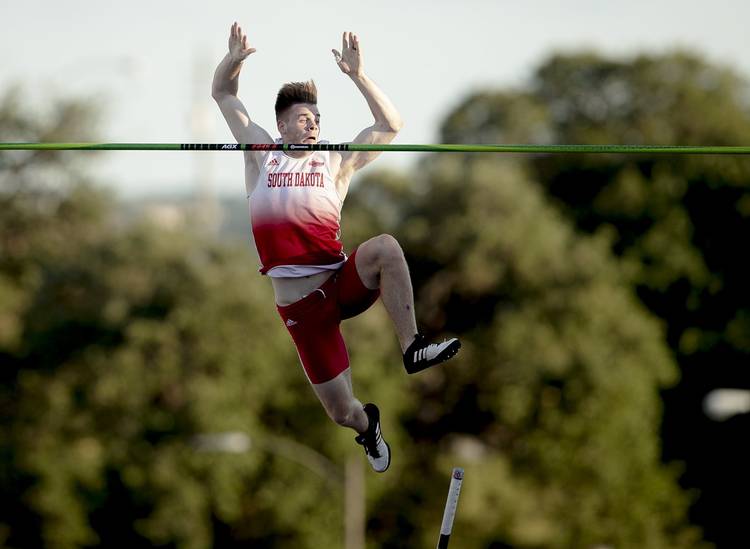 Chris Nilsen makes a mean latte during his day job at Café Brulé, a charming spot in downtown Vermillion, S.D., with staples for breakfast and beef tips and wild salmon for dinner.

“I like to think I make some pretty good coffee,” Nilsen said Wednesday.

He’s one hell of a pole vaulter, though. The South Dakota junior has finished first in every track meet in 2019 save for two.

His coach, Derek Miles, isn’t much of a coffee drinker. All the 2008 Olympic bronze medalist knows is that Nilsen is an artistic barista. “I know his designs are good,” Miles said. “I keep giving him grief, telling him he needs to do something other than the flower.”

Nilsen is a husband, having married his longtime girlfriend, a fellow vaulter, in July 2017. He’s a father, having watched Kelli Vogel-Nilsen bring their son Roman into the world on Jan. 31, 2018.

He’s also now a three-time NCAA champion. Nilsen captivated onlookers at Mike A. Myers Stadium on Wednesday by clearing a personal-best 19 feet, 6 1/4 inches (5.95 meters) on his first attempt at the NCAA outdoor championships. His best jump so far this season had been 19 feet, 2 3/4 inches.

LSU’s Mondo Duplantis, a possible future Olympian himself, was merely awestruck. Duplantis cleared 19 feet, 1/4 inches but just couldn’t get past the next bar.

“I just have to tip my hat to Chris. He had an outstanding day,” Duplantis said. “That’s tough to beat, whether it’s the NCAAs or the Olympics. I don’t want to complain. I don’t have any excuses to tell you. He just beat me. He was just the better man.”

Watching two of the world’s best vaulters battle it out was fascinating. In vaulter parlance, they talk about jumps in meters — the “580 jump,” the “595,” etc. Nilsen appeared to actually clip the bar on his winning jump with his knee. It rattled just a bit but held firm.

He’s been doing the 5.90 meter vaults and 5.95 meters at various meets, Nilsen said. But for whatever reason, it never stuck. “I knew eventually it would stay up, either out of luck or a good jump,” Nilsen said. “There happened to be a little bit of both. I think I tapped it a little bit.”

A 21-year-old husband, father and pole vaulter needs all the luck he can get. Typically, he wakes up, helps his wife get Roman to day care, then he’s off to school, trains in the afternoon and back home to be a dad. Nobody’s perfect, but few college athletes juggle this many chainsaws, either.

“Focusing on what you’re doing where you’re at that moment is I think the key,” Nilsen said. “So when I’m pole vaulting, I’ve got to focus on pole vault and got to try my best. When I’m home, I’m a full-time dad. I’m 21, so I’m trying to figure out how to be a dad.”

College athletics is full of negative stories. Irresponsible athletes start being held accountable, so they jump into the transfer portal to escape who-knows-what. Irrepressible coaches are found to be breaking NCAA by using shoe companies to funnel thousands to those who can put a ball through a hoop. Everybody shrugs at all of it.

And then you see athletes like Nilsen and Duplantis. They simply battled it out with their chosen talents and put on an incredible show. So did Fritsch. Ditto for Baylor’s KC Lightfoot and Arkansas State’s Michael Carr, who finished fourth and fifth, respectively.

Do the folks back at Café Brulé know that a world-class vaulter is serving up $3 cappuccinos and cheese plates that run $15.99? To be fair, a mix of Asiago, Brie and Gouda does pair well with a house baguette, walnuts and fresh fruit.

Perhaps the fine folks in Vermillion will make sure to put something in the tip jar next time.