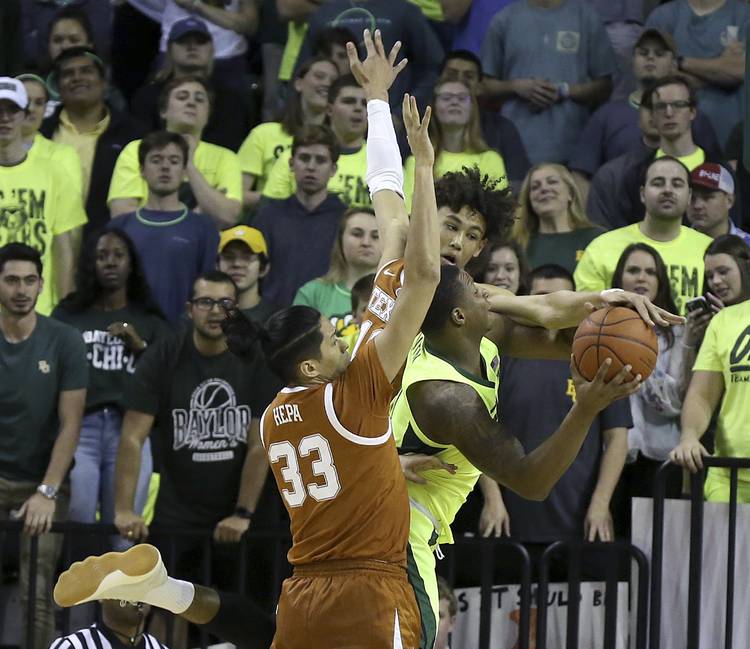 Baylor's Mark Vital has his shot blocked by Texas' Jaxson Hayes as he drives against Texas' Kamaka Hepa during the first half of an NCAA college basketball game Wednesday, Feb. 27, 2019, in Waco, Texas. (Jerry Larson/Waco Tribune-Herald via AP)

WACO — The actual autopsy of Texas’ 84-83 overtime loss at Baylor is rather simple.

Only a basketball connoisseur can truly enjoy what Scott Drew’s team accomplished on Wednesday night. The Bears grabbed 15 offensive rebounds and piled up 20 second-chance points after halftime. Given so many extra opportunities, just about anyone can climb out of a 19-point hole. Baylor sure did at the Ferrell Center.

“Winning close games usually separates the good years and bad years,” Drew said. “Some years, you find ways to win and other years you don’t.”

But most red-faced Texas fans — the ones who haven’t already checked out, anyway — will see something totally different. It’s yet another frustrating loss with a haphazard finish, something that’s become all too common in the Shaka Smart era.

The masses won’t understand how a botched inbounds play went to a 6-11 big man, who shuffled his feet and got called for traveling with seven seconds left in overtime. Jaxson Hayes said he was supposed to catch the pass and flip it to Matt Coleman III. Instead, Baylor got the ball back, trailing by one.

“I’m supposed to make a play, give it to Matt or somebody, but I just couldn’t get the ball,” Hayes said.

They watched in horror as another Longhorn got called for a possible phantom foul with 3.2 seconds left in OT. Jase Febres got whistled, which sent Mario Kegler to the line. He sank two free throws, putting Baylor (19-9, 10-5 Big 12) ahead for good to cap a brilliant 23-point performance.

“I slid my feet, hands up, ref called a foul. Really can’t say much about it,” Febres said. “I think that’s a no-call, honestly. You can’t decide a game off of that. But he called it. Can’t do anything about it. Next time, just beat him to the spot.”

And UT fans walked away in true disgust after one final heave into traffic went awry.

Texas (15-13, 7-8) is now 4-10 this season in games decided by six points or fewer. It’s yet another loss in a season full of late-game, last-play disasters. Oklahoma State, Kansas, TCU, Oklahoma, now Baylor, take your pick. In many ways, they’re all the same.

“That’s just a heartbreaker,” Smart said afterward. It was obvious he was crushed. “Baylor deserves a lot of credit for the way they battled back.”

It’s a bottom-line business, though. This is the kind of loss that rattles one’s faith in the coach himself. Smart is now 65-63 in four seasons at UT. He’s nine games under .500 in Big 12 play and, barring a late surge, will finish in the bottom half of the league standings a third straight year.

One Baylor fan couldn’t help himself. He held up a poster of former UT coach Rick Barnes while taunting the Texas bench.

“I mean, you probably won’t like this (answer), but we’ve just got to be one play better,” Smart said. “In a game like today, one more defensive rebound. We’ve got to make one more free throw. We shot 6-for-11 from the line. Obviously, you can look at the turnover at the end. Can’t do that. We’ve got to contest the three better one more time.”

Smart went through some of the final moments, highlighting Jared Butler’s 3-pointer that made it a one-possession game with 1:30 remaining in OT. Finally, he circled back to his main point.

“All I know as a coach is to keep fighting and working to go grab that one play,” Smart said.

In the first half, the Longhorns were on track to pull off one of the season’s biggest upsets, and without two senior starters. Suspended guard Kerwin Roach II stayed back in Austin and forward Dylan Osetkowski sat it out with flu-like symptoms.

Smart changed the lineup and inserted Kamaka Hepa, the Alaskan-born freshman forward who had just been activated from concussion protocol. A lineup featuring Coleman, Febres, Courtney Ramey, Hepa and Hayes is something fans might see next season, provided Hayes sticks around and skips the NBA draft.

That group played with its hair on fire in the first half. Ramey hit shots from the banks of the Brazos River and sliced through the lane for 17 points. Febres loves these Waco rims. He went wild here last season and did it again, hitting seven 3-pointers and racking up 23 points. Hepa had 11 points in a season-high 39 minutes.

“People stepped up, did what they needed to do,” Febres said. “But that big run Baylor made, we can’t let that happen.”

Drew stuck with his zone defense down the stretch in regulation, and Texas’ offense slowed considerably. Was that the key? Drew called it the “the million-dollar coaching question.”

“It’s like blitzing,” he said, mixing sports metaphors. “If you blitz, you get the quarterback sack and it’s a great call. If they throw a touchdown, it’s like, why you blitzing?”

The Horns wilted late as Kegler hit two 3-pointers and Devonte Bandoo faked Coleman into the air and swished a 3-pointer of his own. Coleman could have won it at the end of regulation, but his left-handed runner in the lane missed, sending things to overtime.

From that point on, considering how Texas has been unable to close out winnable games, it was somewhat predictable.

“We just need to go get better,” Hayes said. “We did everything right. We just need to get more rebounds. And I obviously need to take care of the ball more on the last play.”