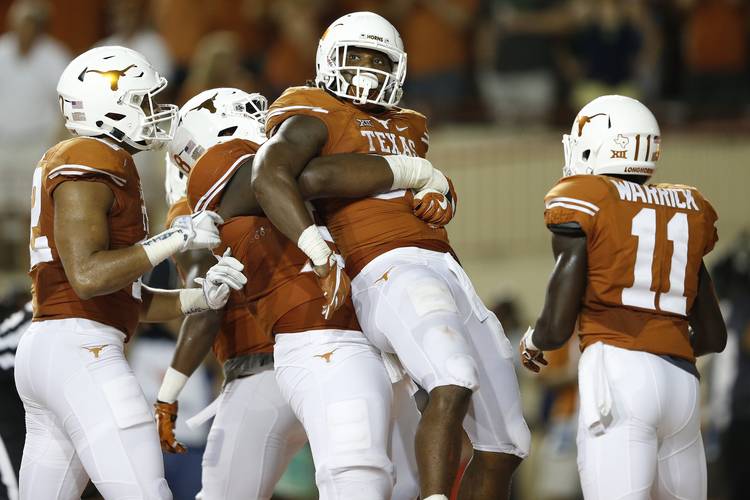 Texas running back D’Onta Foreman breaks away for a touchdown in the fourth quarter to give the Longhorns the lead 37-35 against Notre Dame at Royal-Memorial Stadium on Sunday September 4, 2016. JAY JANNER / AMERICAN-STATESMAN

Strong first presented the idea when the Horns returned from Christmas break. By March, he had a full-blown stump speech. Speaking to UT faculty members, the football coach said, “You have to believe in yourself before anyone will ever believe in you.”

Tack on a hashtag, like the Longhorns do on social media, and anyone can #Believe.

The message is sinking in, apparently. The Longhorns believe anything is possible this season after Sunday’s 50-47 double-overtime thriller over Notre Dame. With 10.9 million people watching on ABC, ESPN officials calculate it was the most-watched season opener ever.

“Like coach Strong says, if you weren’t good enough to be here, you wouldn’t be here,” defensive tackle Paul Boyette Jr. said. “Whatever got you here, got you here. You deserve to be here. Just go out and compete at the highest level.”

During his Labor Day press conference, Strong was sure to point out that one game does not make an entire season. “This can’t be a one-night wonder. It won’t be,” he said.

Receiver John Burt can fill out the rest. “If you just believe in this system, believe in Texas and believe that you can go out there and compete with the best teams in the country, you can succeed.”

It’s amazing how players can believe in themselves thanks to little things. A handful of players received new jersey numbers prior to warmups, and suddenly they felt bullet-proof.

Freshman quarterback Shane Buechele went from No. 16 to No. 7. The number 7 has special significance in Buechele’s Arlington home. Legendary quarterback John Elway was once a college roommate with Steve Buechele, Shane’s dad, at Stanford.

Strong also stripped the anonymous jersey No. 29 from often-injured senior Sheroid Evans and gave him No. 1, typically a college football bull’s-eye.

“He said, ‘Coach I haven’t been on the field in three years.’ And I said, ‘And you’re gonna start at corner,’” Strong said. “The other DBs like Holton (Hill) and all those guys, were so supportive of him. They said, ‘Come on, man, we got you. You’ll be fine.’”

In what Strong described as a “15-round heavyweight fight,” Buechele threw for 280 yards and two touchdowns against the Irish. Evans had one tackle and one pass breakup in his first extensive action since 2013.

Royal-Memorial Stadium was full of 102,315 converted believers in Tyrone Swoopes. The senior admitted after the game that he never gave up, never gave in, despite the slings and arrows of the last two years. After the game, running back D’Onta Foreman called for a standing ovation for Swoopes. No player in recent memory has taken more online fan and media bashing than the quiet, 6-foot-4, hard-charging 18-Wheeler.

“This team is just determined,” Swoopes said. “We’ve been through a lot these last couple of years, and we’re just out there trying to play for each other and coach Strong. We’re just determined to get this thing back on track.”

There were few questions about UTEP on Monday. The Miners (1-0) will be an easier opponent than the Fighting Irish. But considering how the players feel about themselves, it may not matter.

“At the beginning of this season, back in the spring, there was a real change in us having confidence in ourselves and believing we could be one of the best teams in the country,” Burt said.