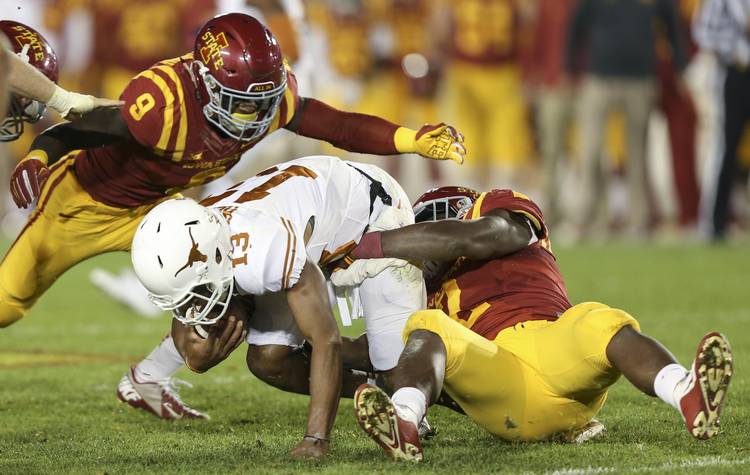 After winning two straight games for the most momentum of the Charlie Strong era, Texas flopped and was shut out by a 2-5 Iowa State team. The loss drops the Horns to 3-5 and puts their bowl hopes in critical condition.

In the second quarter, Fox Sports showed a trailer for the upcoming “My All-American,” the inspiring story of Freddie Steinmark and his fateful season with the national champion Texas Longhorns. The game, not so much.

At halftime, Paul Rhoads invoked his inner Mark Mangino, who was fired earlier this week, when he said the Cyclones “kept sawin’ wood” with a 10-0 lead. That was a thinly veiled reference to the former ISU offensive coordinator’s favorite catch phrase.

Texas had next to no luck throwing the ball, especially in the opening half. Jerrod Heard completed just two of five passes for 15 yards, 18 of which came on a throw-away play on the final play of the second quarter and a minus-3 on a swing pass to Daje Johnson.

Late in the second quarter, Texas safety Jason Hall broke up a potential touchdown pass to Quenton Bundrage in the back of the end zone and forced a Cyclones field goal. That was the difference between 24-0 and 28-0.

With Texas unable to shut down the balanced Iowa State offense, the Cyclones with their new offensive coordinator had the ball for 53 snaps. Of those, 27 were passes and 26 were runs. Iowa State was on pace to have the ball for 106 snaps if our math is correct.

Iowa State freshman Mike Warren went over the 100-yard mark before the fourth quarter even began, becoming the fourth opposing running back to top the century mark against Texas this year. Notre Dame’s C.J. Prosise carried for 98 yards before retiring early.

With Iowa State facing a fourth-and-3 at the Texas 30, defensive coordinator Vance Bedford rushed five, and end Bryce Cottrell sacked Joel Lanning in the backfield to stop the threat.

As many as four Longhorns had injuries pop up in the first half alone, not even counting running back D’Onta Foreman, who was pronounced OK to go by Charlie Strong only to sit out with a turf toe. Linebacker Malik Jefferson sat out the first half with a stomach ache, and cornerback Duke Thomas (head), defensive tackle Hassan Ridgeway (knee) and fullback Alex De La Torre (knee) were shaken up in the first half.

Freshman linebacker Malik Jefferson was missing in action at the game’s start. Even though he was seen warming up in pre-game, he did not start. Tim Cole started in his place. Jefferson was riding the stationary bike on the sidelines and was said to have an upset stomach, and came in on the second series.

This marked the second time this season that Texas was scheduled as a homecoming opponent. The first came in the road game to TCU, which all things considered turned out well for the home team as the Frogs won 50-7. Ditto on Halloween night.

Take your pick. Heard had a number of them, and came real close to throwing a pick-six.

Texas did next to nothing in the opening period as Iowa State used a scrambling Joel Lanning to set up a touchdown for the Cyclones and the Longhorns got hardly anything out of their passing game with one completion for a minus 3 yards.

Texas vs. Iowa State: Horns up, Horns down, plays of the game