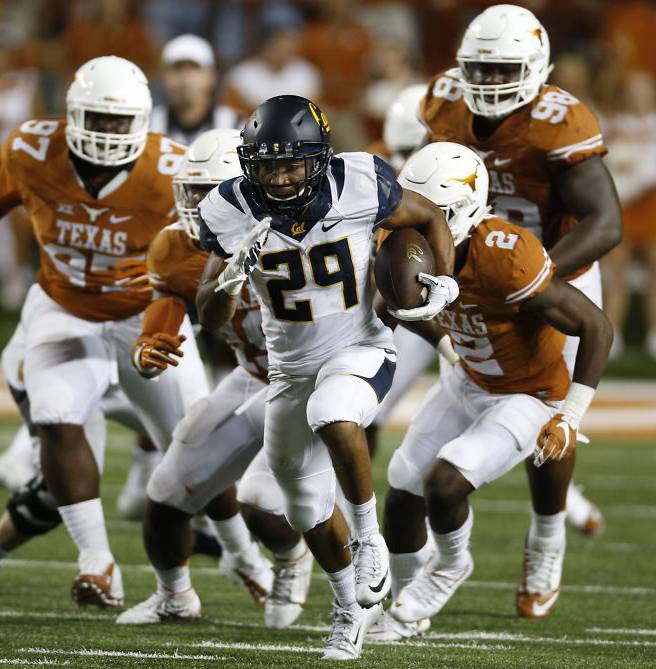 With Texas a point away from tying Cal and perhaps forcing overtime, senior Nick Rose saw pressure from a Cal rusher and shanked his extra-point kick to leave the Longhorns with one of their most devastating losses.

Jerrod Heard was “fabulous,” according to new Longhorn play-caller Jay Norvell. He was all that and more, responsible for 527 total yards of offense. That means hope for the future.

Texas. The Horns gave up a ton of yards and 45 points in three quarters before Cal went into a shell offense and tried to work the clock. With seven minutes left in the game, the Bears had 556 yards and little interest in being creative, which is why they ended up with only 548 yards.

Texas and Cal put on an entertaining show offensively in the first half as they combined for six touchdowns, two field goals and 654 yards. The teams battled to a 24-24 tie.

After leading by 10 points, Texas completely collapsed in the third period when Cal threw up 190 yards of offense on 18 plays and outscored the Longhorns 21-0.

The Longhorn band and the Alumni Band spelled out the words, P-R-E-S-I-D-E-N-T F-E-N-V-E-S at halftime in a salute to UT President Gregory L. Fenves, who was taking in the game. N-I-C-E T-O-U-C-H, band.

Worst decision
Senior Johnathan Gray made a foolish decision by running a kickoff out of the end zone by returning it to the Texas 5-yard line. It didn’t cost Texas, however, as Heard took the Horns on a 95-yard scoring drive.

Best collision
Pressed into action after Texas’ two starting safeties left the game with an ejection and a shoulder injury, junior Kevin Vaccaro collided with Cal running back Khalfani Muhammad near the Texas goal-line. Antwuan Davis recovered the fumble for a touchback.

Even with Matthew McConaughey in the house — we’re joking, he’s terrific; loved him in “True Detective” — Texas linebacker Ed Freeman collapsed on the field without being hit as Cal was trying to rush to the line for a quick snap from the 1-yard line. It was so obvious he was handed a yellow card by the soccer officials.

Heard started with a bang, completing six of his first seven passes in the opening quarter for 146 yards with a drop mixed in. Heard has demonstrated poise and a big arm as he settles into the quarterback role. His 256 yards of total offense in the first half was the most by a Longhorns quarterback in a half since 2012.

Texas led 24-14, but squandered its 10-point lead in the final 92 seconds of the first half on a quick, 75-yard drive and a field goal in the closing seconds after a Heard interception, the first turnover by the Longhorns offense all season.

On a fourth-and-1 at the Cal 36, Heard tossed the ball to Gray on a sweep right, and Bears linebacker Hardy Nickerson stopped him in his tracks in the first quarter.

Those 11,000 tickets that were unsold at midweek maybe didn’t get sold at all. There were big pockets of empty seats at Royal-Memorial Stadium at the opening kickoff. A lot of them filled in during the first quarter, however.

New interim athletic director Mike Perrin, named honorary captain, was out there with captains Daje Johnson, Shiro Davis and Alex De La Torre for the opening coin toss. Perrin made the rounds and even met with the media in the press box before the game.