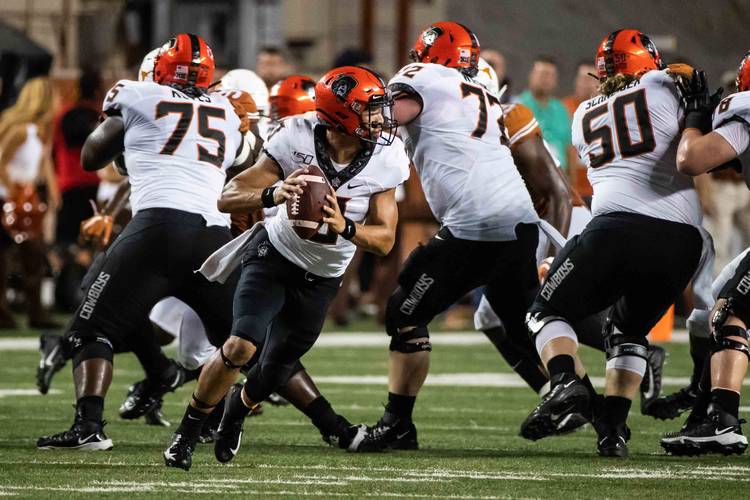 Quaterback Spencer Sanders (3) runs with the football during an NCAA football game against Texas Longhorns on Saturday, Sept. 21, 2019 in Austin, Texas. [LOLA GOMEZ/AMERICAN-STATESMAN]

Sources close to the Sooners tell me that Oklahoma put up 100 points against the open week and are ready to rain touchdowns onto the Big 12. Injuries in Texas’ secondary make the Sooners the overwhelming favorite to capture another Big 12 title and earn another shot at the College Football Playoff. Will the defense be ready?

Oklahoma State looked like the third-best team in the conference in a loss against Texas. Spencer Sanders is the most dynamic quarterback Mike Gundy has ever brought to Oklahoma State. The trio of Sanders, running back Chuba Hubbard and wide receiver Tylan Wallace might be the best in the Big 12.

Kansas State got to soak in the victory over Mississippi State for longer than normal since the Wildcats were on an open date last weekend. The Wildcats moved into the national rankings for the first time this season and can earn more attention with a road-victory over a formidable Oklahoma State squad on Saturday.

I was ready to crown Baylor as the true threat to Oklahoma and Texas before the Bears whimpered offensively in a 21-13 victory over Rice. Texas beat that same Rice team by 35 points a week before Baylor’s trip to Houston. The Bears are now a home underdog to Iowa State on Saturday.

The words that appropriately describe TCU’s passing attack in its loss to SMU last weekend aren’t suitable for print journalism. A 14-point fourth quarter was the only thing that made the stat line look respectable for quarterback Max Duggan. At least running back Darius Anderson is fun to watch.

We’ll know more about Iowa State after its trip to Baylor. The bandwagon in Ames went from standing room only to half-price admission with quickness. The Cyclones can still make their mark on Big 12 play, but all doubts are erased if Iowa State lays an egg against Baylor.

Would you like the bad news or the worst news? The bad news is that a trip to Oklahoma to face the Sooners is next up on the schedule. The worst news is that quarterback Alan Bowman is injured and expected out for a significant period of time. I’m trying to think of a way to blame this on Kliff Kingsbury. Give me a second.

On the bright side, Kansas knows it can beat TCU entering the matchup this weekend.