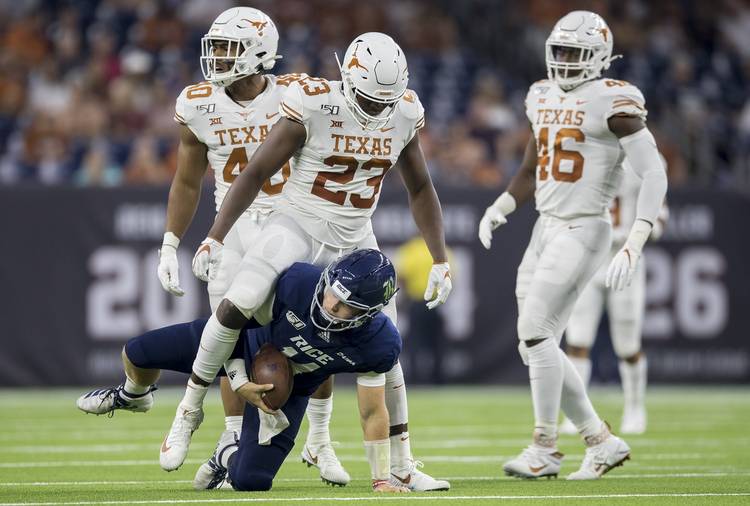 Rice quarterback Tom Stewart tries to get up as Texas linebacker Jeffrey McCulloch steps over him in the first half Saturday. [RICARDO B. BRAZZIELL/AMERICAN-STATESMAN]

“I’ve been focused on our game right now,” Texas linebacker Jeffrey McCulloch said after Saturday’s 48-13 win over Rice. “I haven’t watched anything.

“I know Kansas State was playing pretty good when we left the hotel,” he said. “What happened with that game?”

K-State knocked off Mississippi State in Starkville to improve to 3-0. Elsewhere over the weekend, TCU manhandled Purdue, West Virginia and Oklahoma rolled to victory, and even Kansas — Kansas! — got a road win against Boston College.

All of this success hasn’t gone unnoticed inside Moncrief. No. 12 Texas (2-1) will open the league gantlet this week against 3-0 Oklahoma State, and the pistols will be loaded, ready to fire. After all, Cowboys coach Mike Gundy is 7-2 against the Horns since 2010. A school official said Sunday that fewer than 200 tickets remain.

Texas coach Tom Herman said all the right things last week leading up to the blowout win over Rice. Same preparation as LSU, he said. Same 1-0 mentality. Afterward, there were hints that Herman had a good feeling, though.

For example, Herman admitted he wanted the ball after winning the coin flip. He always defers. But this way, the offense could “get the extra possession in the first half when our (first-teamers) were still in there,” he said. Texas opened with four touchdowns on four consecutive drives that averaged 81 yards.

The coaching staff also sat receiver Collin Johnson (hamstring) as a precaution. Center Zach Shackelford aggravated a foot injury suffered in the preseason. He was in street clothes on crutches by game’s end but did not appear to be limping.

Defensive backs B.J. Foster (hamstring) and DeMarvion Overshown (back) were also sidelined against the Owls.

Herman is steadfast about not peeking ahead to the next opponent. His army of analysts does all the advance scouting. That group, which includes former North Carolina coach Larry Fedora, presents the information to UT coaches on Sunday like a dossier.

Up to this point, all Herman knows is what he’s seen on TV at the team hotel, like McCulloch. “That running back and receiver sure looked good on TV — I know that,” Herman said. “So we’re going to have our hands full.”

Herman might have missed OSU’s first play from scrimmage Saturday afternoon against Tulsa. Chuba Hubbard went 75 yards for a score. He finished with 256 rushing yards on 32 carries. All five of Hubbard’s career 100-yard performances have come in the past seven games.

Quarterback Spencer Sanders may be a redshirt freshman from Denton Ryan, but the Cowboys still have Tylan Wallace, who had five catches for 118 yards against the Golden Hurricane. That includes a 90-yard score after he got behind the defender. Wallace also had a 75-yard touchdown catch to start the second half against McNeese State.

Wallace is the only receiver in the nation with three catches for 60 yards or more this season.

Last season in Stillwater, Wallace got loose for touchdown catches of 40 and 36 yards against Texas. The Horns fell into a 24-7 hole and simply couldn’t recover, ultimately losing 38-35.

This looks and feels like a different Texas program, though, as players will attest. It’s a team that looked good in victories over Louisiana Tech and Rice and went toe-to-toe with LSU, now ranked fourth in the nation.

“I know that playing the (LSU) game last week, win or lose, was going to help us down the road, and it will,” Herman said. “The experience against an elite defense, an elite quarterback is and has made us better.”

The Rice win the week after the LSU loss helped certain players get their confidence back. Running back Keaontay Ingram is a prime example. In Ingram’s mind, that touchdown drop against LSU is now a distant memory. He had 93 all-purpose yards against the Owls and two touchdowns.

“Everything’s not going to go your way,” Ingram said. “Football, you’re going to have adversity, and then I don’t know anybody who hasn’t. Just live and learn from it and, you know, get better.”

Ingram, Roschon Johnson and a now-healthy Daniel Young give the Horns three solid running back threats against Oklahoma State. Ingram said he’s hoping to get rid of the knee brace he’s been wearing in recent weeks after a preseason injury in August.

Herman called this an “empty-the-chamber kind of week.” The Longhorns will play the Big 12 opener and then get a bye week.

“If we want to be elite, if we want to be the things that we say we want to be, we’re going to have to bring our A game again in preparation to go 1-0,” Herman said. “It’s leave everything you have on the practice field and on the field at DKR on Saturday night.”