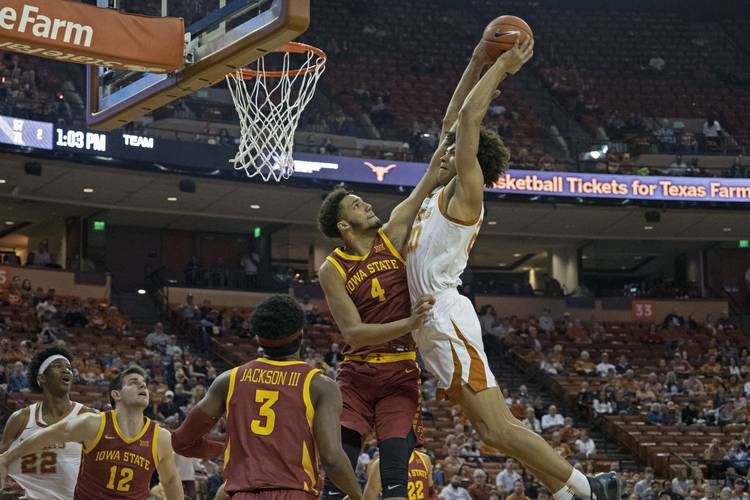 Some NBA scouts who regularly pass through the Southwest region have been slipping into Texas games in recent weeks.

Maybe it’s just due diligence, much like college coaches checking on their local high schools. Nobody wants to be accused of overlooking star talent.

The Longhorns’ quiet 6-9 junior forward can dominate at times, such as when he opened with back-to-back dunks in Saturday’s win over Iowa State. And he can totally disappear, such as when he had only one rebound and one shot attempt — a dunk, naturally — in the last 11 minutes, 40 seconds in Ames.

“It’s something we’ve got to keep working on — feed the post,” Texas coach Shaka Smart said. “We don’t want our guys to turn it over, but we want to get to ball to the guy who’s probably playing the best on our team right now.”

This is a pivotal moment for Sims, too. Allen Fieldhouse tends to bring out the best in the visitors. UT’s Jarrett Allen had a season-defining performance in Lawrence, going off for 22 points, 19 rebounds and three blocks in 2017. That game alone was all the NBA scouts needed to see.

Sims already set a career high with 20 points against the Jayhawks on Jan. 18. Afterward, Kansas coach Bill Self didn’t hold back, calling Sims “the best athlete in our league.”

The Horns have inconsistent 3-point shooters, and the offense can stagnate at times. But there is little doubt Sims is the most efficient player on the floor in burnt orange.

All four of Sims’ career double-doubles have come this season. He’s shooting 65.7% from the floor and averaging eight rebounds. In eight Big 12 games, Sims has connected on 40 of 64 shots (62.5%). The second-best shooter is Oklahoma’s Brady Manek (47.8%).

Texas coaches have set a goal for Sims to get double-digit shot attempts every game. He was 9-for-14 against Kansas at the Erwin Center, but he’s averaged just 7.8 attempts in the past four games.

Texas’ guards simply can’t get the ball inside to the team’s most effective scorer enough.

Smart said the coaches called five or six plays designed to get Sims the ball in the last 11 minutes against Iowa State. Solomon Young played in front of Sims and denied the passing lanes.

“If he’s open for a split second, he’s got to have it,” Smart said. “With a good defender like Young, he’s not going to be open for three seconds, four seconds, five seconds.”

On Sims’ only legitimate post opportunity down the stretch, he passed it back out to the guards.

“I would love for him to shoot it 15 times,” Smart said. “But part of it is his responsibility as well, like holding a seal or going after the ball. It’s something we’ve got to keep working on.”

Are the Longhorns’ guards just too tentative?

“They don’t want to throw the ball away,” Smart said. “But that’s basketball at this level, man. You got to stick your chest out and make the play.”

The past two years, Sims watched how UT’s Mo Bamba and Jaxson Hayes found their stride in the paint and became first-round draft picks. He was eager to go up against bigs like West Virginia’s Sagaba Konate and TCU’s Kevin Samuel.

During Sims’ time at Texas, there’s been no bigger challenge than Kansas’ Udoka Azubuike, the Big 12’s leader in blocks.

Azubuike is coming off a slow week for him. The athlete nicknamed “Dok” had six points in 28 minutes at Oklahoma State and just five points against Texas Tech.

“I don’t know what is going on there,” Self told reporters Saturday, “but we have to get him going and hope like heck that we come out and we play with great energy on Monday.”

Sims going one-on-one against Azubuike in the open space would be a sight to behold. Sims has shown much more confidence this season getting the ball 12 to 15 feet from the bucket, putting it on the floor and making a move.

Texas coaches would happy to see that. NBA scouts want to see it, too.