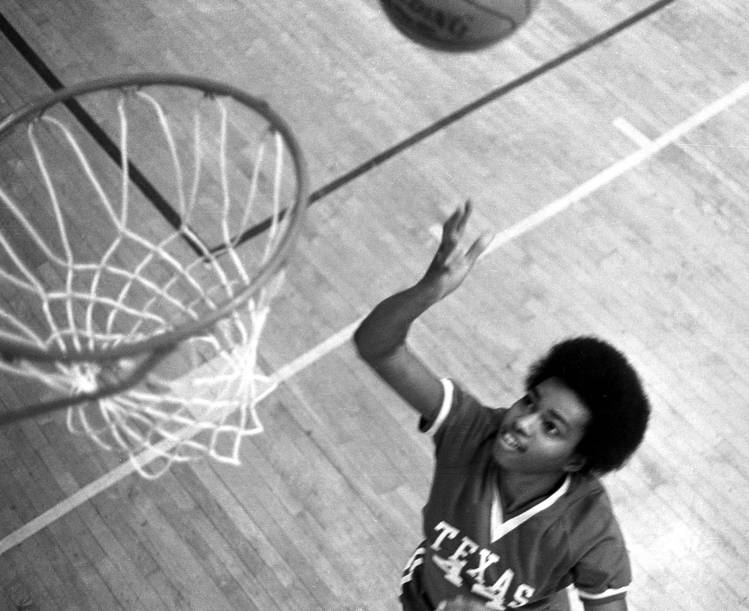 Young’s touchdown that won the national championship is perhaps the most famous play in the history of UT sports. It also was just one of many athletic achievements attributed to a black athlete at Texas.

The jerseys of Kevin Durant and T.J. Ford have ascended to the rafters at the Erwin Center.  Earl Campbell and Ricky Williams have won the school’s only Heisman Trophies. Carlette Guidry and Sanya Richards-Ross have earned multiple Olympics gold medals.

Black athletes have accomplished a lot at Texas in a relatively short time. In 1964, former track and field athlete James Means Jr. integrated the athletic department that has existed since the late 1800s after his mother, activist Bertha Means, pressured UT regent Frank Erwin for his inclusion. Six years later, Julius Whittier became the first black letterman on the football team.

As Black History Month nears its end, here are some stories of several UT pioneers.

In 1972, Texas basketball secured a share of its first Southwest Conference championship in seven years with a 72-65 win over TCU. Following the triumph, Jimmy Blacklock decided to celebrate in the solitude of his room.

So the team’s only black player skipped a shower, packed his things and made his way across campus. Along the way, a white student ran up to him. The exchange was short. The student simply offered Blacklock a handshake and thanked him for coming to Texas.

The stranger was right. Blacklock didn’t know, and it would take years for him to comprehend his contribution. Only after he was inducted into the Men’s Hall of Honor in 2016 did he realize that he had a legacy at Texas.

After two years at Tyler Junior College, Blacklock — a product of Edward B. Evans’ program at Houston Yates — signed with Texas. Blacklock had thought about enrolling at Michigan State or UCLA, but Texas afforded him a chance to be near his ailing mother.

He joined the Longhorns one year after Sam Bradley had integrated the roster. Bradley averaged 6.5 points per game during the 1969-70 season. Blacklock gave the program its first black star. As a junior, he led the Longhorns in scoring, averaging 16.6 points per game. He was the team’s MVP for the 1970-71 season and became a captain a year later. The 19 wins Texas recorded during Blacklock’s senior season were the second-most for the Longhorns in a 24-year span.

Those two years in Austin, however, weren’t always joyful. Blacklock conceded that he was recruited because “they needed not just a player, a good black player.” He encountered racism on the road and felt isolated on a large campus where “you wouldn’t see a black face for weeks.”

Blacklock developed respect for a few of his teammates, but that admiration did not lead to any friendships. He recalled a teammate and an assistant coach leaving a bug in his drink once. He wasn’t helped by any teammates when he got into a fight during a game at Mississippi. According to Blacklock, it was Texas coach Leon Black — not his teammates — who named him a captain.

Blacklock left Texas with a degree in business administration. He then went on to play more than 2,500 games with the Harlem Globetrotters. Blacklock, now 63, is currently a coach for the organization.

Blacklock returned to Austin only once in the three decades after his final game as a Longhorn due to his schedule and a fear of not being welcomed back. He says that he’d now love to visit more often, though. He said he was touched by the 2016 Hall of Honor induction and has come back to the Erwin Center twice in the past two years with the Globetrotters.

He’ll perhaps have another opportunity to make it back to his old campus this fall. His son, Ross, is a defensive lineman for TCU, which plays at Texas on Sept. 22.

Recently, Retha Swindell was told by an acquaintance that she was a hero.

The proclamation wasn’t outlandish. Swindell was one of the UT women’s basketball program’s first two All-Americans. She also was the first black woman to play any sport at Texas.

Swindell, a 2001 inductee into UT’s Women’s Hall of Honor, shrugged off her role as a pioneer, however. She’s quick to point out that her first coach, Rodney Page, was an African-American and that “I’ve always had kind of a buffer.” Swindell boasted a strong support system, and she added any adversarial situations she encountered were tough to solely pinpoint on race.

“I just did what I needed to do to get a degree and get a job,” said Swindell, who retired last year after a lengthy career as a teacher and coach in Baytown.

Jody Conradt, who ended up coaching Swindell for three seasons, said she isn’t surprised that Swindell downplays her ties to the Texas history books. Conradt described her as unassuming and humble.

Swindell, a 6-2 post, also was a force on the court. Her school records of 1,759 career rebounds and average of 11.6 rebounds per game won’t be threatened anytime soon — with 481 career rebounds, senior guard Ariel Atkins is the Longhorns’ active leader and in the last decade, only Nneka Enemkpali and Kathleen Nash have come within five boards of the 25-rebound game Swindell recorded against Baylor in 1979.

“It was sort of unusual at that time to see women that tall and mobile,” Conradt said. “She could dominate.”

It was Page, who won the trust of Swindell’s family and high school coach, who recruited her out of the East Texas town of Center. Page likened her to a defensive game-changer in the mold of Bill Russell. “There were people that would have killed me if I messed it up with her,” he joked.

At Center, Swindell also was a state champion in the triple jump. She played defense in an era when girls basketball was a half-court game. That might explain why rebounding was her forte, though she also ranks eighth all-time in scoring at Texas.

“That’s why I feel like I have the record in rebounds still, because that’s what I did in high school,” Swindell said. “I played defense and rebounded, so it was very natural for me.”

Originally, Andre Robertson didn’t know if he wanted to play football or baseball at Texas.

He starred in both sports at West Orange High, but it was the state track meet in 1976 that brought him to Austin. On a break from winning a bronze medal in the Class 3A high jump, he went on a tour of UT’s athletic facilities.

First up was the football team’s weight room. There, the 155-pound quarterback saw the 260-pound defensive lineman Brad Shearer and all 230 pounds of Campbell going through a workout.

“This guy’s thigh is bigger than my waist,” Robertson recalled thinking of Campbell. “I chose baseball. I think that was the best move I could have made.”

Robertson wasn’t the first African-American to play baseball at Texas, but he was the first to receive a scholarship — Gralyn Wyatt had previously walked onto the team but never lettered. A wrist injury cost Robertson games at the beginning of his freshman year, but he cracked the lineup in a 14-1 rout of TCU on March 11, 1977.

Naturally a shortstop, Robertson was converted to a second baseman by assistant coach Bill Bethea. He remained at that position through the 1979 season. Robertson flirted with a .300 batting average in 1977 and 1978, but was known more for his glove.

“We called him ‘silky sweet’ and that’s what he was, he had really good hands and was a really good ballplayer,” said Detroit Tigers manager Ron Gardenhire, who was UT’s shortstop in 1978 and 1979. “He also was one of the nicest guys you’ll ever meet in your life.”

Robertson said he integrated the little league in Orange when his father put together a team with him and other kids whose parents worked at the DuPont plant. He didn’t recall it being a big deal, and he fosters that same attitude toward this time at Texas. In Robertson’s eyes, the search for victories created a color-blindness among the Longhorns. (Texas won 144 games from 1977-79).

Life on the road, however, was different.

Robertson said that a couple of Houston fans admitted to him years later that they had yelled racial epithets in an attempt to rattle him. Throughout his career, he tried to tune out everything off the field. There was one place, though, where he said he heard everything.

“The worst was Baylor,” Robertson said. “That was, like, a Christian-type school? Their athletes they love, but when you’re going in there, that stuff comes out.”

Robertson was drafted by Toronto in the fourth round of the 1979 MLB draft and went on to play five seasons at shortstop with the New York Yankees. His career was curtailed by injuries sustained in a 1983 car accident; long-time scout Al LaMaccia once opined to the New York Daily News that, “At the time of the injury he was already the best all-around shortstop the Yankees had had since Phil Rizzuto.”

After failing to catch on with Atlanta following a 1986 trade, Robertson moved back to Orange. He received his degree from Texas in 1992 and is approaching his 28th anniversary with the same plant that employed his father, Harvest. He and his wife, Lanier, have raised three kids.