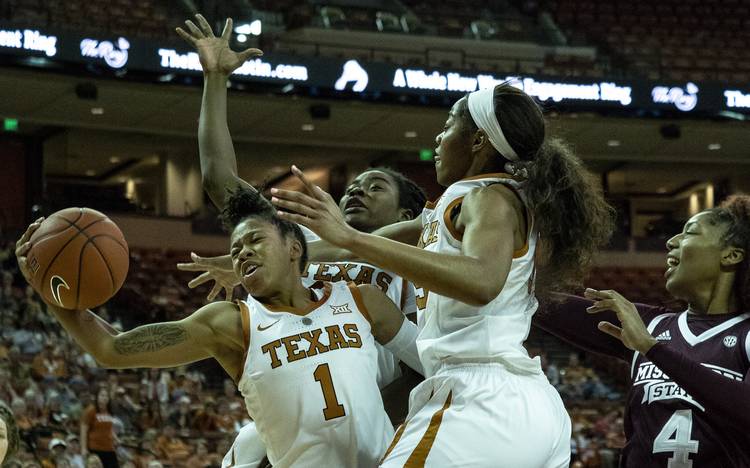 Texas' Sug Sutton (1) tries to corral a loose ball during the loss to Mississippi State on Sunday. [Rodolfo Gonzalez/For AMERICAN-STATESMAN]

In the Texas women’s basketball team’s first game against a national contender, the Longhorns dropped the ball.

This was intended to be a measuring stick game for 10th-ranked Texas, which figured to have its hands full with sixth-ranked Mississippi State. During a 67-49 loss Sunday afternoon at the Erwin Center, Texas learned it needs to get tougher against top-flight opponents.

“They punched us in the mouth, and we didn’t react to it well,” said junior point guard Sug Sutton, the only Longhorn who performed well Sunday.

As for dropping the ball, Texas finished with 22 turnovers, 14 in the first half, that led to 19 Bulldog points. In a stat category that might have been overlooked, Mississippi State took 65 shots to just 46 for Texas.

Mississippi State improved to 8-0 while Texas slipped to 7-1.

“This was a good learning experience for these young guys,” she said. “They got a good taste of it today, and give credit to Mississippi State.”

The Bulldogs, who have lost in the NCAA championship game two straight years, looked relaxed, ready and eager to dominate. Big-game experience was a benefit against Longhorns, whose three freshmen — Charli Collier, Audrey Warren and Joanne Allen-Taylor — played a combined 57 minutes.

Across the court, MSU coach Vic Schaefer was beaming about his team’s performance.

“When we’re locked in and we’re playing as hard as we played today for 40 minutes, it’s hard (for opponents) to simulate that in practice,” he said.

“We’re built for these types of games. These kids have been in these moments a bunch. Bigger moments. They had a confidence about them, an air about them.”

This was the 44th straight victory for the Bulldogs in regular-season nonconference games.

Texas fans watching the game on Fox Sports 1 might have turned the TV off during a miserable first half. The Longhorns went scoreless during a 6-minute stretch in the first and second quarters, and MSU went on a 16-0 tear during that span.

The Bulldogs led 36-22 at halftime and extended the margin to 27 points in the second half.

McCowan set a school record by pulling down the 1,109th rebound of her career early in the fourth quarter.

Up next for UT is a traditional game against Tennessee next Sunday at the Erwin Center.