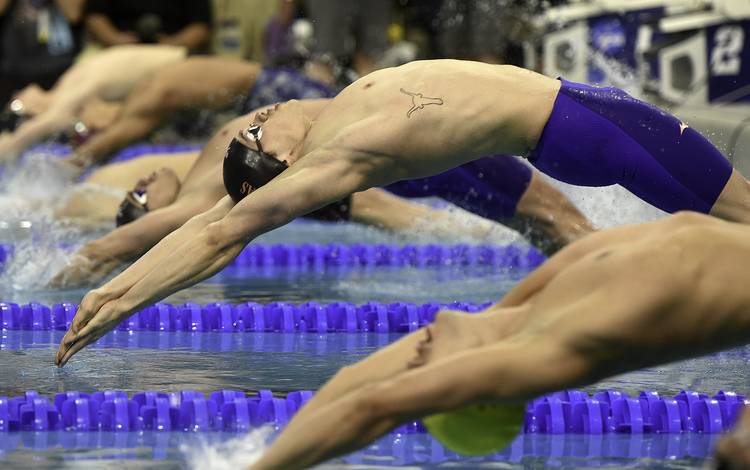 University of Texas at Austin senior John Shebat begins the 200-yard backstroke during the 2019 NCAA Division I Men's Swimming and Diving Championships on Saturday March 30, 2019, at the Lee and Joe Jamail Texas Swimming Center at UT. [STEVE LEWIS for AMERICAN-STATESMAN]

Home-pool advantage isn’t what it used to be. At least not for Texas, anyway.

The Longhorns were happy to welcome the nation’s best inside the spectacular Texas Swim Center over the years, provided they all dragged along a cinder block. Texas hosted the NCAA men’s championships and won it all in 1991 and ’96. But the Horns settled for frustrating runner-up finishes at home in 2003 and 2014.

The collegiate aquatic elite descended upon Austin again this past week for the NCAAs. Once again, the old lion Eddie Reese ambled home bone dry.

California coach David Durden was the giddy one toweling off Saturday night after the Golden Bears’ celebratory dip when Cal put away its sixth national title. This one was rather convincing, too. Cal rang up 560 total points while Texas finished second with 475.

“The one good thing about it, I think I’m too old to go in the water anymore,” said Reese, who was aiming for the program’s 15th national title. Instead, Texas notched its 12th national runner-up finish. “If I get that chance again, I’m going to convince them of that. I’m going to bow out.”

Cal placed two swimmers in the top eight of every event during Saturday’s final day. Texas finished 1-2 in the 200 backstroke and Olympian swimmer Townley Haas served as the anchor leg of the Longhorns’ winning 400 freestyle relay team. But Cal had a more overall depth and scored more points across the board.

“I think we were a pretty complete team in all the distances and all the strokes,” Durden said. “All the relays were pretty solid. We weren’t exceptional in one area. We were just good all the way through.”

The dozen or so Cal fans wearing oversized bear costumes sure had a good time. But the hundreds of Texas fans in a crowd of 1,876 were roaring at every pivotal moment, even though most probably knew the Horns were out of contention by the national anthem.

UT’s John Shebat posted the second-fastest time ever in the 200 backstroke in 1:36.42, a pool record. Here’s a senior who had arthroscopic knee surgery before the Big 12 championships last season. “Six weeks later,” Reese said, “he’s second in two events at the NCAAs, which is incredible.”

It helps to have friendly competition. UT sophomore Austin Katz chased Shebat and was second in 1:36.45 — three one-hundredths of a second behind the winner. Such a slowpoke.

Katz couldn’t believe the energy when teammate Jordan Windle won the platform diving championship with 447 points. When Miami’s David Dinsmore sliced the water on his final attempt to finish second, huge shouts of “Jor-dan!” rang through the natatorium.

That energy carried through to the 400 freestyle relay, the signature event to judge the ultimate big dog. The team of Daniel Krueger, Shebat, Tate Jackson and Haas zoomed back and forth in 2:45.12, another new pool record.

For Haas, it was the senior’s final swim in burnt orange. The nine-time national champion can feel good knowing that he’s leaving the Texas swim program in just as good a shape as he found it.

“It means a lot, obviously,” Haas said. “It makes me feel good as a senior and as a class that we kind of did our job, I guess.”

More important, Haas said the locker room is even better.

“One of the thing we stressed was becoming tighter as a family, not a team,” he said. “I think if you look at the way just tonight went, I think we did a pretty good job with that. It means a lot that we all stayed tough and we all still love each other, even though we got second.”

Time marches on. The names will change. Reese joked how the coaching buzzwords will change. But one thing remains constant — the level of excellence required to survive within Reese’s world. Here it is 41 years later, nothing’s changed there.

In the Texas locker room afterward, Reese said, “I spoke less than I normally spoke. I said I know we didn’t get what we wanted tonight or this weekend. But the whole year has been the greatest year any group of people have ever put together, as far as taking care of each other, encouraging people.”

Second place is horrible when first is so much better. But Reese and the Horns will be back.

“Sometimes we forget how long it took us to become perfect,” Reese said. “You need to remember that.”