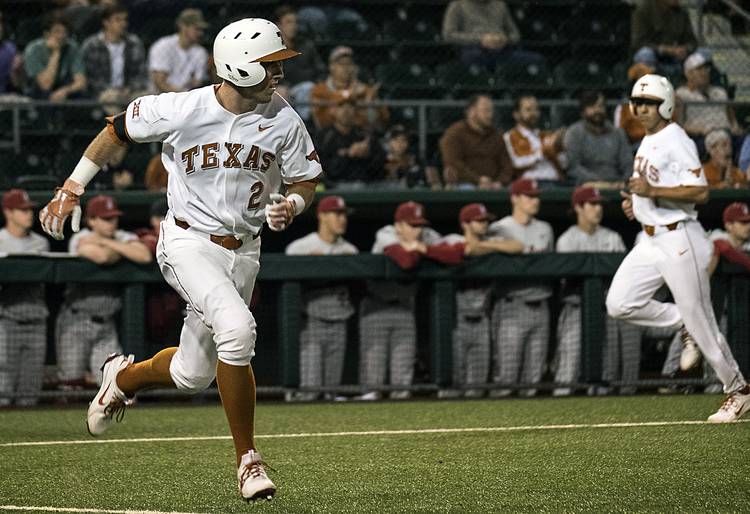 SAN MARCOS — It took more than an extra hour because of a rain delay, but Texas was able to avenge a loss at Texas State last year with a 6-1 win over the Bobcats on Tuesday night.

Texas State starter Wes Engle had held the Longhorns hitless for three and a third innings before Longhorns first baseman Masen Hibbeler scored Duke Ellis on an RBI single. Engle then walked Zach Zubia with the bases loaded, bringing in Ryan Reynolds for a 2-0 lead.

That knocked Engle out of the game. Texas scored another run in the fourth when Austin Todd’s groundout scored Hibbeler.

“I thought we did a great job of handling the elements with such a long rain delay,” Texas coach David Pierce said. “I thought (Texas State) coach (Ty) Harrington handled that about as professionally as you can and I really appreciate that, but I thought our kids just stayed prepared and were able to tack on, and we got excellent pitching tonight.”

Texas shortstop David Hamilton — a San Marcos native who went to San Marcos High School — put the Longhorns up 5-0 in the eighth when he hit his first collegiate home run, a two-run shot down the right-field line that also plated Hibbeler.

When asked if his playing in San Marcos again was any extra motivation to hit his first homer, Hamilton said, “No. I guess I just got lucky.”

“It felt amazing,” he said. “Put the team up two more runs at the time, and that was big. … I mean, they beat us here last year so we knew they were a scrappy team. We just pitched really well today. We didn’t really hit that well, we just got runners on base and then we got them in.”

The Longhorns scored their last run in the ninth on Reynolds’ RBI-single that scored Tate Shaw. The Bobcats avoided the shutout with an RBI-single with two outs in the bottom of the ninth.