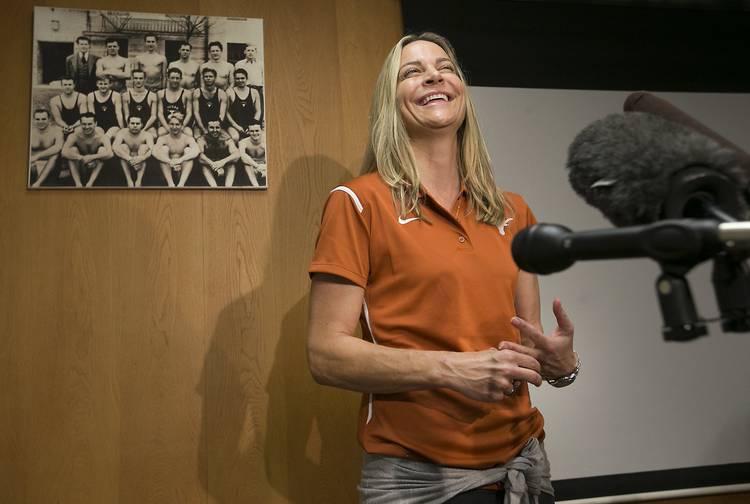 Used to be, you could bank on the Texas women’s swim team competing for a national championship. The Longhorns won nine national titles from 1981 through 1991.

Then the program gradually fell out of national relevance and more into a competitive afterthought.

As Texas’ men’s team, under coach Eddie Reese, continued to be the most consistent program on campus, the women always hoped to regain their spot among the powerhouses, schools like Stanford, California and Georgia. Texas A&M, which has won the past two Southeastern Conference titles, even has surpassed the Longhorns in women’s supremacy.

Texas was last in the top five at the NCAAs in 2009. Before that, it was 2001, when the Longhorns finished third.

Maybe this is the season Texas comes back, at least to the top five.

The Longhorns currently are tied for second in the national coaches poll. They even spent time at No. 1 after UT knocked off Georgia in Athens in mid-January. Stanford, featuring Olympic stars Katie Ledecky and Simone Manuel, is tops, ahead of the Longhorns and Cal.

UT, which finished the dual meet season at 11-1, lost only to the Cardinal. The Longhorns beat the Golden Bears, the fourth-ranked Bulldogs, No. 7 North Carolina State and the ninth-ranked Aggies.

The rankings, however, are a reflection of the dual meet season and not necessarily a projection of where the coaches believe the teams will finish at next month’s NCAA championships, where the top 16 in every event score points.

“I’m really proud of our end-of-the-season ranking,” said UT women’s swim coach Carol Capitani, who is in her fifth year with the Longhorns.

“That’s our dual meet ranking. We’ve never been that high,” she added. “It’s a testament to their being great racers. They’re great racers and they got some confidence during the season. … We just try to carry that till the end of the season.”

They’ll have an idea how they’ll fare at the NCAAs once the Big 12 meet finishes Saturday night. The meet starts Wednesday at the Jamail Texas Swim Center with a light schedule of diving and a relay.

There’s not much chance that the Texas women or men will lose the Big 12 meet. Instead, the goal is to qualify swimmers for nationals. The women’s NCAA meet is March 15-18 in Indianapolis, which also will host the men’s championship the following week.

The Texas men have won 37 straight conference titles dating back to the old Southwest Conference. The Longhorns are the two-time defending NCAA champions. They rank third nationally, but probably will be the favorite for a third straight NCAA title once the field of qualifiers is filled out. UT has four swimmers who won Olympic golds in Rio.

The Texas women, who have 10 swimmers already qualified for the NCAAs, finished a disappointing 15th at nationals last March. Capitani’s best national finish at Texas was seventh, in 2015. The Longhorns were ninth her first two years in Austin.

“We have a full team, the right amount of girls,” said UT backstroker Tasija Karosas, who has won five Big 12 individual titles. “Everybody’s really bought into the program and trusts the coaches and trusts each other.

“I mean, I definitely feel a little bit of pressure (over the high ranking). I think it’s almost motivation to hold that spot and keep it. You know it’s almost like we’re trying to prove something and prove it to ourselves. It’s more motivation than pressure.”

Capitani said: “I think we will stack up pretty well. … This is where it’s fun. This is like putting everything together and seeing. .. You throw that (swim) down and we’ll throw that down.”