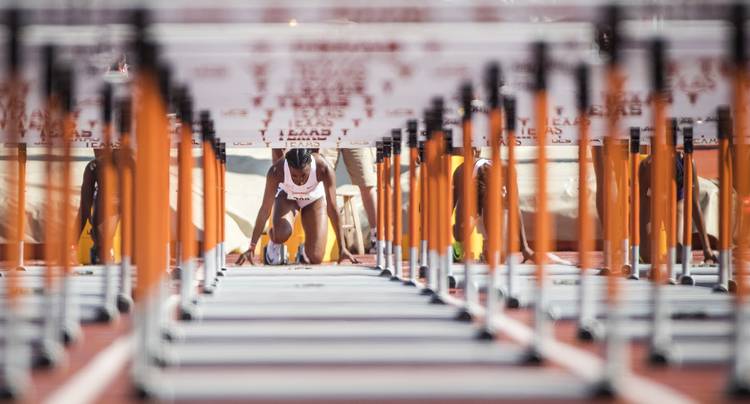 Texas sophomore Rushelle Burton prepares to compete in the 100-meter hurdles at the Texas Relays at Mike A. Myers Stadium on March 30, 2018. RICARDO B. BRAZZIELL / AMERICAN-STATESMAN

On Saturday, Texas will ask a quartet of Longhorns to defend its track against a trio of Tigers.

Texas qualified four hurdlers for the 100-meter final out of Friday’s preliminary heats at the Texas Relays — sophomore Rushelle Burton, senior Pedrya Seymour, senior Ariel Jones and junior Mariam Abdul-Rashid. Joining them in the nine-hurdler field for Saturday afternoon’s final will be three athletes from LSU.

“As a group, we did pretty well,” Burton said. “This is our first outdoor meet. I think the times that we ran today are a good time for an opening.”

Seymour led all hurdlers with a prelims time of 12.97 seconds. Burton (13.14) and Jones (13.51) also won their preliminary heats. Abdul-Rashid was beaten by LSU’s Tonea Marshall in her race, but her time of 13.50 seconds was the qualifying round’s seventh-fastest.

At the 2016 Rio Olympics, Seymour finished sixth in this event while representing the Bahamas. Burton’s bronze-winning time of 12.65 seconds at last year’s NCAA meet is the fastest-ever by a freshman. Jones has won three conference titles in the 400-meter hurdles, and she finished fourth on Friday in a 400-meter final that also featured a third-place showing from Abdul-Rashid.

“I think we’re definitely standing on the shoulders of great hurdlers,” said Seymour, a graduate transfer from Illinois. “We haven’t broken any records yet, which shows a lot that the records at Texas are pretty steep. We had good hurdlers in the past and now we still have good hurdlers.”

The hurdling standards at Texas have been set by 100-meter competitor Nichole Denby (12.62 seconds in 2004) and 400-meter standout Raasin McIntosh (54.16 seconds in 2004). But even if a current Longhorn sets a new record at Texas, she still won’t be the most decorated hurdler in the program.

Burton said it was “a privilege” to compete for Buford-Bailey. Seymour, who was recruited to Illinois by Buford-Bailey, transferred to Texas since she plans on working with her coach once she turns professional.

In addition to giving advice about hurdling, Buford-Bailey can also still go. Over spring break, a photo surfaced of her hurdling at a UT practice. That led Jones to proclaim earlier this week — with a slight laugh — that “she can go to the next Olympics if she puts her mind to it.”

Buford-Bailey, 47, was not as optimistic about a comeback.

“I have promised that I won’t do that again,” she said. “I wasn’t even sure if I could go over the hurdles before it happened. I am getting up there in age, but they were talking a lot of smack, so I had to show them what I could do.”

In other UT-related news, senior Haley Crouser added to her family’s Relays legacy with a win in the Section A javelin. Crouser’s throw of 168 feet, 3 inches actually fell almost 22 feet behind Ariana Ince, but she was credited with the victory since Ince was competing as a post-collegiate athlete. Crouser’s cousin, Ryan, set the meet record in the shot put in 2014.

Texas junior Shay Petty finished second in the women’s pole vault with a personal-best mark of 13 feet, 11.25 inches. That was the third-best vault in school history. UT senior Fabian Dohmann also won silver as his final throw of 243 feet, 2 inches launched him into second place in his Section A javelin competition.