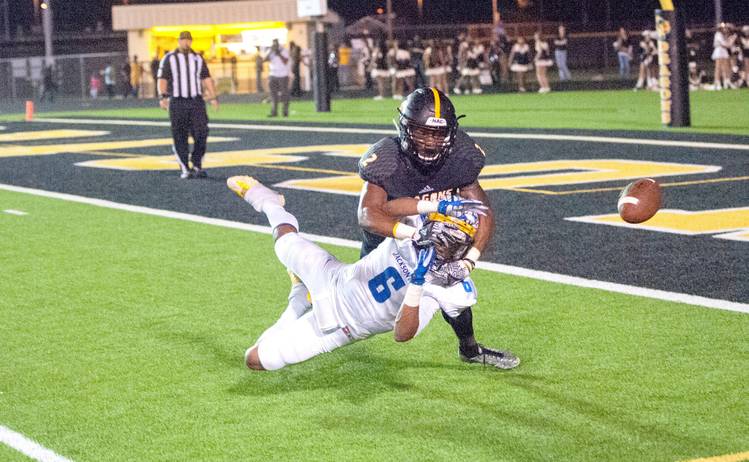 Nacogdoches defensive back Josh Thompson (2) disrupts a pass during the Dragons' 46-45 loss to Jacksonville in 2016. He is a part of Tom Herman's initial 2017 signing class. (The Daily Sentinel, Nacogdoches)

NACOGDOCHES — Eating right can be a real drag, especially in a college town where there’s a fast food joint on every block.

Josh Thompson has it easy now. Wait until he gets to Texas and there’s a heapin’ helping of everything. Just what every growing Longhorn needs.

“Just staying on top of what they told me,” Thompson said with a sigh. The four-star cornerback weighed 178 pounds when he signed with Texas on Feb. 1. In April, he was busting out at 192.

“My cheat days are the weekends,” Thompson added. “I’ll go to Raising Cane’s or somewhere and get chicken strips. Maybe Wingstop. But during the week, it’s basically just brown rice, grilled chicken and broccoli.”

Thompson’s willing to eat, run, lift, whatever it takes to break free and get to Austin. Rated the fifth best cornerback prospect in the state for 2017, he’s anxious to rejoin Texas safety Brandon Jones, his old high school teammate, with the Longhorns.

Nothing wrong with Nacogdoches, the home of Stephen F. Austin University, Thompson said. But it’s also been labeled Nac-a-nowhere.

“I look at this town and say, this is not where I actually want to be,” Thompson said. “A lot of people try to pull you to places you don’t want to go to. I’m going to college in a few months. I’m not looking for any trouble. You could be around the wrong crowd at the wrong time, so I just try to stay away from all of that.”

Now that Thompson has signed his letter of intent with UT, at least the school can get him into a dorm and off Jones’ futon.

That’s where he was last November on a cool Saturday morning when Thompson’s and Jones’ phones both started blowing up with breaking news. “It said coach (Charlie) Strong had been let go,” Thompson said. “I told Brandon, and he said, ‘Yeah, we figured.’ Then the next day, I was leaving out of Austin and coach (Tom) Herman was landing in Austin. Wow, that was quick.”

Thompson’s phone didn’t stop buzzing. TCU, Penn State, Ole Miss, Arizona State and UCLA all threw hooks back into the water to see if he’d bite. Not this time. Thompson had already de-committed from TCU and wasn’t about to do it again.

TCU coach Gary Patterson sure knew who he was chasing. Thompson was a high school All-American and invited to attend The Opening. He was rated the 50th best prospect in the state on the Fabulous 55. Thompson had 71 tackles, 10 tackles for loss, two interceptions and five pass breakups his final season.

It’s possible that Thompson may have stayed on offense had things held true to form. But he broke his fibula playing baseball as a sophomore. The summer before his junior year, he shed his cast just before 7-on-7 drills got going.

The team needed another defensive back. “They put me out there and I made some plays. They said I might have found a new position. Well, OK,” Thompson said.

When the 2015 season started, Thompson was out there alongside Jones, a four-star recruit from 2016 who was widely considered one of the nation’s best safety prospects. Jones signed with Texas and had 16 tackles in 12 games his freshman season.

Just like Jones, Thompson wasn’t about to let any opposing player get the last laugh.

“That’s my dude, man,” Tyler John Tyler coach Ricklan Holmes said. “Josh is the only kid that I’ve ever coached against, he speaks and we have a great conversation. I like Josh. Josh is a hard-working kid, too. That dude is talented.”

Since Jones spent last season with the Longhorns, he can help guide Thompson through the ups and downs of what promises to be a fascinating ride under Herman.

“Once I got to playing with Brandon, I settled in and just wanted to stay at corner,” Thompson said. “On offense, I have to remember a lot of plays. Defense, it’s just do this, call out a play and do my job. Just take care of my side of the field and go make a play. That’s how I look at it.”

Go make a play. That’s all Herman asks. Oh, and eat your broccoli.

Editor’s note: This is the 11th of a series of looks at Texas’ 2017 signing class, as we reach out to the recruits themselves across Texas, Oklahoma and Florida to get a sense of just what the Longhorns are getting. Past stories: