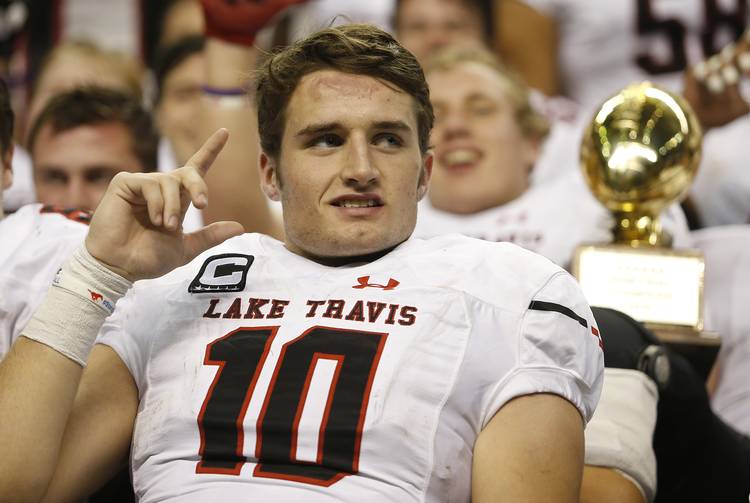 Lake Travis' Cade Brewer celebrates a 63-21 win over Atascocita during a Class 6A, Division I state semifinal at The Alamodome in San Antonio, Saturday, Dec. 10, 2016. (Stephen Spillman / for American-Statesman)

Cade Brewer entered the new year with some standard resolutions.

Coming off his senior season at Lake Travis, Brewer wanted to eat better. He wanted to become a gym rat. He also — and this is where the tight end strays from the norm — promised to gain weight before the three-star Texas signee joins the Longhorns this summer.

The 6-3, 210 Brewer needs to bulk up by June. So he has spent much of his free time this offseason working out at Lake Travis and at the Xceleration Sports Training Center. He’s also been training with Mark Jaimes, the father of Brenden Jaimes, Lake Travis’ Nebraska-bound offensive lineman.

On the advice of Texas’ nutritionist, Brewer is eating five or six smaller meals per day.

Eating, of course, isn’t a problem when your mother cooks salmon, pork chops and a chicken fried steak that was a favorite of Lake Travis football players. Each night, Brewer also downs a peanut butter sandwich before going to bed.

Brewer played at 210 pounds throughout most of his senior season. He then dropped five pounds after battling strep throat before the Class 6A, Division I championship game on Dec. 17.

“It was difficult at the beginning, because I wasn’t used to eating that much” said Brewer, who has a target weight in the 240s. “Once you start eating a lot, you start getting used to it. The weight came on pretty easy … getting in the weight room helps a lot too.”

Brewer attended plenty of UT basketball and baseball games during his childhood, and he got to Royal-Memorial Stadium annually. He was a fan of Jordan Shipley. Brewer’s bedroom was decorated with burnt-orange paint, a poster of Vince Young and a Longhorns flag. Bob Brewer recalled his son’s only non-Longhorn decoration being a LaDainian Tomlinson Fathead.

As Brewer developed into a collegiate prospect, though, he discovered that the admiration between himself and Texas wasn’t mutual.

Brewer was first offered last February by Texas State. Schools like Bowling Green, UTSA and North Texas then followed. He verbally committed to SMU in the spring, a commitment that preceded offers from Texas A&M and Oklahoma.

Texas, though, kept its distance. Pass-catching tight ends, after all, were of little use to Charlie Strong, who got 43 receptions out of the position during his three-year Longhorns tenure.

Despite the interest from the Aggies and Sooners, Brewer maintained his pledge to SMU. In fact, he celebrated in Dallas with the Mustangs last October when SMU stunned Tom Herman’s Houston Cougars.

Herman, of course, was hired to replace Strong at the end of November. On Dec. 2, he watched from the sidelines as Brewer made six catches in Lake Travis’ playoff win over Westlake.

He was pledged to the Longhorns by Christmas.

“I’ve been bleeding orange for a while now,” Brewer said. “At the beginning of the football season, I did not think I would go to Texas because I didn’t think coach Strong was going to get fired and all that jazz. When I got the offer from Texas, it changed my mind for sure.”

Texas tight ends coach Corby Meekins has explained that a Longhorns tight end “has to be a blocker and he has to be a receiver.” While at Houston in 2016, Meekins and Herman got 23 catches from senior Tyler McCloskey. Last year, Marcus Baugh caught 24 footballs at Ohio State with Longhorns play-caller Tim Beck serving as his co-offensive coordinator.

Looking at the depth chart, though, Texas has a veteran with a nagging foot problem (Andrew Beck), a converted wide receiver (Garrett Gray), a graduate transfer with 15 career catches (Kendall Moore) and a redshirt freshman who was recruited as a blocker (Peyton Aucoin). Unresolved legal issues may prevent fellow 2017 signee Reese Leitao from ever joining the program.

So where does Brewer fit in?

Over his junior and senior years, he had 115 receptions and 29 touchdowns. Brewer conceded that he must work on his blocking — the weight gain should help — but he did line up in the backfield and adjacent to the offensive tackles in Lake Travis’ multiple-look spread offense. Lake Travis offensive coordinator Michael Wall noted that Brewer spent nearly 50 percent of his snaps as either a traditional tight end (26) or fullback (22).

“To me, he epitomizes everything an H-back should be,” said Wall, who assessed Brewer’s hands as the best he has coached. “He is physical like a fullback, can handle (high school) defensive ends as a TE, and he runs routes and catches like a skilled WR.”

Editor’s note: This is the second of a series of looks at Texas’ 2017 signing class, as we reach out to the recruits themselves across Texas, Oklahoma and Florida to get a sense of just what the Longhorns are getting. Past stories: