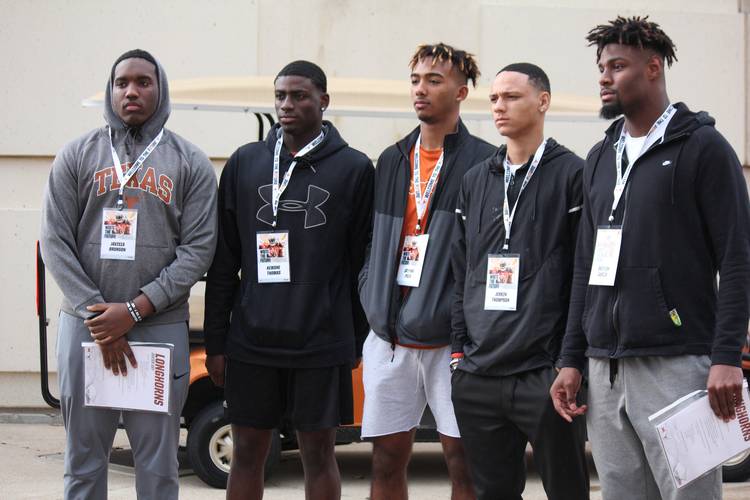 Texas’ 2020 recruiting class gained its 14th member on Sunday when four-star safety Jerrin Thompson pledged to the Longhorns. The 6-0.5, 183-pound product of Lufkin High School picked up an offer from Tom Herman’s staff on July 23. He’s the first safety committed to the Longhorns in the 2020 cycle.

Thompson was a first-team all-district selection as a sophomore. He earned Defensive MVP honors in District 8-5A Division I in 2018. Thompson is a ball hawk who recorded at least 90 tackles in the last two seasons on varsity. He also has five interceptions and ranks No. 45 on the 2020 Fabulous 55.

Only time will tell https://t.co/wXZKAQjdX1

Skill set: Jerrin is an athletic ball hawk who can cover like a cornerback and hit like a safety. His ability to play safety or at nickel gives him coveted versatility against spread offenses. He’s next in the long list of athletic, versatile safeties from East Texas. Texas has leaned on East Texas for defensive back prospects like Josh Thompson, Brandon Jones, and DeMarvion Overshown.

Immediate impact: The potential impact of any safety prospect entering Texas’ program depends on the continued progression of B.J. Foster and Caden Sterns. The two will be juniors with high NFL Draft aspirations when Jerrin and the rest of the 2020 class reaches campus. There shouldn’t be much need for a true freshman to walk on campus and contribute right away at safety. Still, Jerrin can cut his teeth on special teams and work his way into the two-deep before competing for a starting spot once Sterns and Foster are playing for money.

Fitting into the program: East Texas kids know how to work. Jerrin fits that mold. He’s a hard-nosed kid who loves football and wants to be great. Those are the types of personalities the Longhorns want to recruit. It isn’t always just about the athletic prowess of a player, though Jerrin is not lacking athleticism. He should fit in well early as a special teams ace and depth in the secondary before eventually building his own niche.

Recruiting at the position: Texas thought Jerrin Thompson would be joining Duncanville’s Chris Thompson Jr. at the safety position in the 2020 cycle, but Chris pledged to Auburn. The best in-state option available is Alvin Shadow Creek’s Xavion Alford, who is down to Texas and Texas A&M. The Aggies lead for the four-star who plans to announce by the start of his senior season.