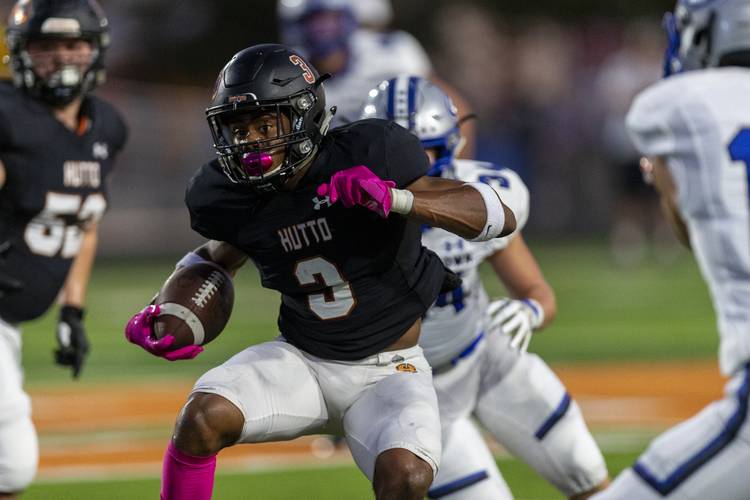 “Texas was a dream school of mine ever since watching Jamaal Charles as a kid,” Harrison said. “Getting the opportunity to play at that level was an amazing opportunity to me. I feel like I have a good opportunity to come in and play soon.”

Harrison is quick-footed slot receiver measuring in at 5-10 and 170 pounds. He held 13 reported offers before picking up a late one from Texas. Hutto is just 30 miles from campus. Harrison was a guest of Texas for the Red River Showdown. Texas’ 2020 recruiting class still ranks sixth in the nation and first in the Big 12.
Advertisement

Skill Set: Athlete is the best way to describe Harrison. He’s simply an electric football player with massive potential at multiple positions. He’s a stash and save player the Longhorns can use after a year or two of development at a specific position. His quickest way to reach the field is likely at slot receiver, but his combination of quickness and ball skills make him an intriguing prospect at cornerback or nickel.

Harrison is great after the catch and in the return game. He’s also known for his physicality as a blocker, which the Texas staff will love. Harrison isn’t one of the top-rated players in Texas, and he won’t move the needle on the national recruiting scene, but that doesn’t mean his pledge wasn’t an important get for the Longhorns considering the three de-commitments since the loss to Oklahoma.

Immediate impact: Harrison’s route to playing time likely depends on his long-term position. He could be a D’Shawn Jamison type prospect who gets a shot on both sides of the football. Jamison worked his way into the offense as a freshman and is now back at corner in his second year in Austin. Harrison might get the same opportunity in limited packages offensively as a freshman, even if Texas believes his long-term future is on defense. Texas loves slot receivers and Devin Duvernay is gone after the 2019 season.

Fitting into the program: Hutto is a quick drive to Austin, depending on the traffic. Harrison shouldn’t need much time to integrate himself into Texas’ locker room with his proximity affording him chances to get to campus numerous more times before enrolling next summer. By all accounts, Harrison is a hard-nosed kid who shouldn’t be shocked by the demands placed on the Texas football players.

Recruiting at the position: Harrison is Texas’ third commitment at wide receiver if we project him to slot receiver. Fellow wide receiver pledges Quentin Johnston and Troy Omeire are bigger, taller outside receivers. Texas is also in the mix for Arkansas commit Kelvontay Dixon, who is the younger brother of Texas running back Keaontay Ingram. Texas’ lone commitment at cornerback is John Tyler four-star Kitan Crawford.