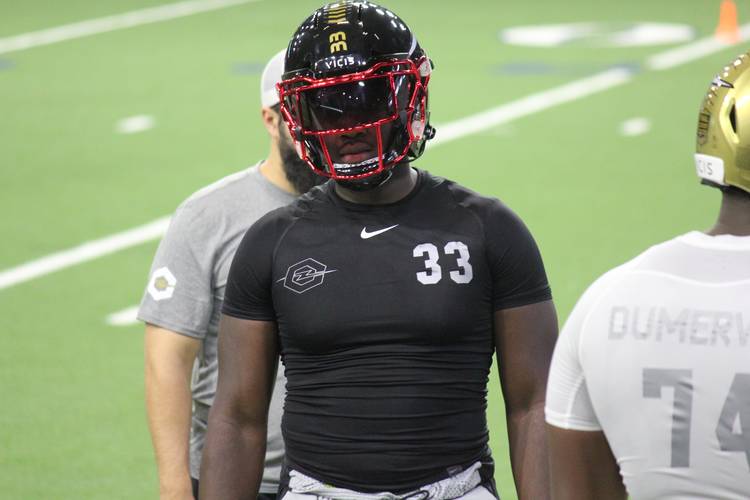 “Texas always felt like home more than anywhere else,” Umanmielen said. “I stopped worrying about scheme so much because Charles Omenihu made it work, so why can’t I?”

Skill set: It always felt like Umanmielen’s heart remained in Austin and with the Longhorns. His main concern was scheme. Umanmielen is a big-bodied defensive lineman who wants to remain at defensive end. He continuously stated throughout the process that he’d prefer to play in a four-man front, yet he kept visiting Texas and remained close to current commits like Prince Dorbah. The Longhorns overcame Umanmielen’s schematic concerns to land a play who profiles perfectly into an odd-man front because of his combination of size and athleticism.

“Princely had a great summer conditioning camp,” said Manor assistant coach and recruiting coordinator James Keller. “He worked hard and I can’t wait to see the results on the field.”

Umanmielen isn’t quite a pure edge rushing defensive end or big enough to move inside to play defensive tackle. The 4i position will provide him a home, much like it did for Roach under defensive coordinator Todd Orlando. Umanmielen will be tasked with taking on double teams against the run and penetrating the pocket when teams pass. His ability to make plays behind the line of scrimmage is exactly what the Longhorns want at the position.

Immediate impact: Roach won’t be on the roster when Umanmielen steps foot on campus next summer. There will be an open competition for the two-deep at the 4i position and it is likely that Umanmielen works himself into some early snaps if he shows up on campus in shape. He’s among the best pure athletes Texas has recruited at defensive line under Herman. Umanmielen’s ability to play early comes down to his own work ethic and the development of the young defensive linemen currently on campus. He wants to play early and there’s no doubt that Texas will afford him the opportunity if Umanmielen is among the best options on campus as a true freshman.

Fitting into the program: Umanmielen shouldn’t be shocked by the culture at Texas when he arrives next season. He lives a short drive away and spent plenty of time around the program on visits to understand what is expected. Texas hasn’t exactly dominated the Austin-area if we remove Lake Travis from the equation. Landing Umanmielen is a big get on the football field, but it’s also important because the Longhorns didn’t lose a home-grown product to a rival program.

Recruiting at the position: Texas is doing a masterful job at defensive line in the 2020 class. Umanmielen joins a group that includes Vernon Broughton and Van Fillinger. Dorbah plays defensive end at Highland Park, but is expected to move to B-Backer at Texas. The big fish remaining is Collins, who is a four-star in his own right. If the Longhorns land Collins, Oscar Giles and the defensive staff get an A+ for their efforts in the 2020 cycle.