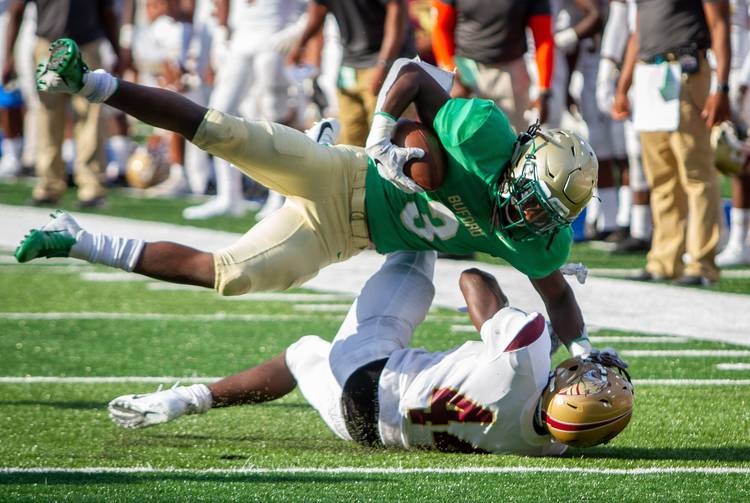 Texas’ commitment list for the 2019 class grew to 16 when Georgia native Derrian Brown pledged to Tom Herman and the Longhorns after an official visit weekend that included the USC game. Brown, a four-star running back from Buford High School just outside of Atlanta, is a four-star prospect who stands 5-foot-10 and 179 pounds. Brown’s commitment was first reported by Rivals.com.

He held 30 offers, including Penn State, Alabama and Auburn. He’s the first running back to pick Texas in the 2019 cycle.

Skill set: Brown is the No. 20-ranked running back in the entire 2019 class because of his versatile skill set. He’s a big-bodied running back who invites contact and is rarely brought down on first contact or by one tackler. His balance is amazing, which is aided by his shorter frame.

Immediate impact: It’s no secret that Texas lacks reliable depth at running back with Toneil Carter slipping out of the depth chart. Tre Watson won’t be around when Brown arrives on campus, leaving guys like Keaontay Ingram and Danny Young as prime competition. Ingram looked great in his first two appearances, but he can’t do it alone.

Snaps are available for a true freshman running back and Brown can bully his way into the two-deep by the end of 2019. The new rule allowing four games without losing a redshirt means it is more likely young guys get opportunities.

Fitting into the program: Brown is the eighth out-of-state commitment for Texas in the 2019 class. Yes, that is half of the class. The number is likely to reach double digits by the time fax machines go back into hiding for a year following national signing day in February. He shouldn’t struggle to fit into the program as a player. Brown is a hard-nosed, no-nonsense football player with the toughness and competitiveness Herman and his staff crave in football players. Brown will enroll with fellow commit Kenyatta Watson II, who plays prep football minutes from Brown.

Recruiting at the position: Running back was the only position yet to pick up a commitment in the 2019 cycle until Brown pledged. The Longhorns will sign a second running back in the class if a solid target is a possibility. Noah Cain and Trey Sanders, who took an official visit to Texas over the weekend along with Brown, are the top targets. The duo shares a backfield at IMG Academy in Florida. Deondrick Glass, a four-star prospect from Katy, is the only running back in the state to hold an offer from the Longhorns.

Texas 37, USC 14: One winning play leads to another, sparking a 34-point avalanche in Longhorns romp