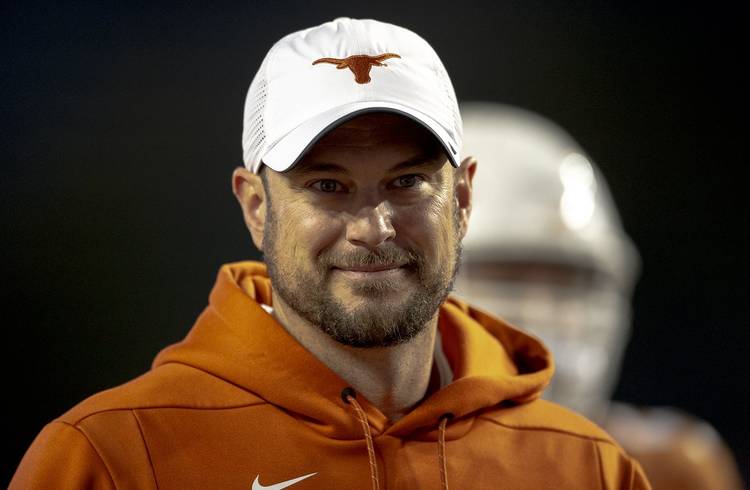 Texas’ 10th commitment of the 2020 cycle is out-of-state defensive end Van Fillinger. The 6-3, 250-pound product of Utah is the first non-Texan to pledge to the Longhorns in the 2020 cycle. He’s the second defensive linemen, joining four-star defensive tackle Vernon Broughton, who pledged on Wednesday night. Fillinger is the third-ranked prospect from Utah and the No. 350-ranked overall prospect in the class.

Fillinger held 18 offers and picked the Longhorns over programs like Ohio State, Michigan, and Oregon. He’s the first true defensive end pledged to Texas in the 2020 class and is expected to play the 4i position like Malcolm Roach.

Skill set: Fillinger is exactly the type of defensive lineman that the Texas coaches love to deploy in the odd-man defensive front. He’s big enough to take on double-teams, and athletic enough to beat guards and tackles on a pass rush. Roach was also a three-star defensive end from out of state when he signed with Texas. Fillinger hopes to play a similar role and make the same type of lasting impact that Roach has made during his time on Texas’ campus.

Immediate impact: Fillinger won’t be tasked with contributing starting snaps as a true freshman as Texas has built strong depth at the position. That’s a good thing for a program and Fillinger will benefit from a redshirt season. He’ll be allowed to participate in four games and prove his worth early to avoid a redshirt season if he arrives on campus ready to contribute on special teams or on the two-deep.

Fitting into the program: It shouldn’t be difficult for Fillinger to find his footing at Texas. He’s considered a hard working prospect with versatility. That’s what defensive coordinator Todd Orlando and defensive line coach Oscar Giles search for in prospects. Fillinger is the type of player who produces better than his star ranking gives him credit for because he’s considered too small for defensive tackle and not athletic enough to be an edge rusher. Texas won’t force him to be either of those things, which should allow him to blossom in Austin.

Recruiting at the position: Texas took two steps forward recruiting along the defensive line this week by adding Broughton and Fillinger. The Longhorns’ top targets remaining at defensive end are local products Alfred Collins and Princely Umanmielen. The Longhorns possess a better shot of landing Collins than Umanmielen, who is on record stating he prefers the four-man defensive front used at Texas A&M.