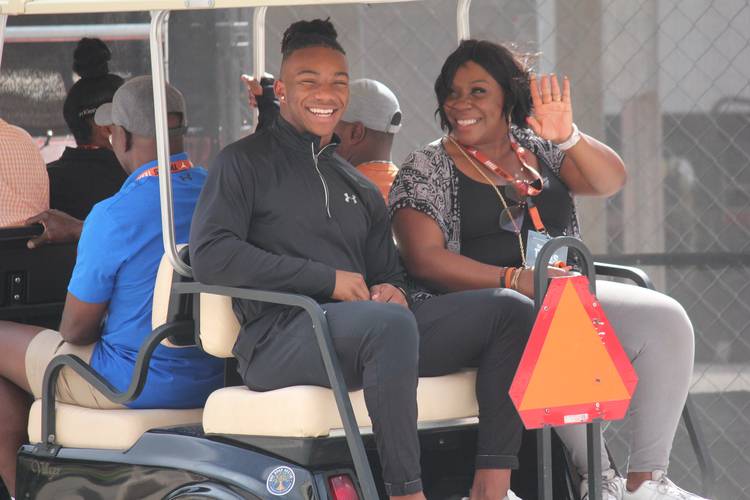 Texas went out of state for a five-star running back when Bijan Robinson of Salpointe Catholic High School (Ariz.) pledged to the Longhorns on Friday afternoon. He’s the 12th commitment for Texas in the 2020 class, and the first running back. The 6-0, 200-pound prospect rushed for more than 2,000 yards in each of the past two seasons. He’s also added 30 career receptions in his three-year varsity career.

This moment is one I’ve dreamt of my entire life. We all dream of things, but God, thank you for helping me see this dream become a reality. The process of choosing only one school to spend the next chapter of this reality, wasn’t easy. The last few months was more than just choosing a school. To me, it was a crossroad that could change the direction of my life, and my future. It was a decision that I couldn’t make on my own, or even with my family, but one I had to exclusively make with the help of God. I am forever grateful for every coach and organization for hosting my family and I, the recruiting process was one that I will never forget. Thank you to every single individual who has helped me along this journey. My family, my coaches, and the good ol’ city of Tucson. I feel and experience your love and support every single day, and I do not take it for granted. I am excited to announce, that I will continue to grow as a man, student, and athlete, at The University of Texas at Austin. #HookEm Thank you to @pbjpeg for the edit much love to you S/o to my auntie @mis_risssssss for helping me with the letter

Robinson gives Texas another piece to the offensive puzzle in the 2020 cycle. The Longhorns now hold commitments from a five-star running back, two four-star quarterbacks, three four-star offensive linemen and a three-star athlete in Jaden Hullaby who can play a variety of positions. Robinson is the second commitment in the 2020 class from outside of Texas. The Longhorns signed 10 such prospects in the 2019 class.

“He’s outstanding in every way. Not just on the field, but as a student and a teammate,” said Salpointe Catholic head coach Dennis Bene. “He is really happy and that is what matters most to me. Coach (Stan) Drayton will be a great mentor for Bijan in the coming years.”

Skill set: Robinson is a complete running back. There’s a reason he’s the fourth-ranked running back in the nation, per 247Sports composite rankings. He’s a big-bodied running back capable of handling 20-plus carries between the tackles. Tom Herman wants his offense to become the physical force of the Big 12. Adding Robinson to a backfield with Keaontay Ingram and Jordan Whittington gives Texas three star running backs with a variety of skill sets.

Robinson is the highest-rated running back signed by Texas in the Herman era. He’s that type of prospect, checking in as the 20th-best prospect in the country regardless of position. For a comparison, Lake Travis quarterback Hudson Card was the highest-rated commit in the class until Robinson joined, and Card is ranked No. 57. Robinson is the game-changer the Longhorns failed to land at running back in the 2019 class, though it appears Whittington will spend more time at that position than wide receiver.

Immediate impact: It’s rare to see a program rely on one running back in the modern game. Depth is important, and Robinson is a prospect who can arrive on campus and provide 10-plus carries a game in a specific package to lessen the load on Ingram and Whittington. Players like Robinson expect to play as a true freshman and it’s hard to imagine him not earning playing time early in his first year on campus, especially with the new redshirt rule that allows players to participate in four games without losing eligibility.

Fitting into the program: Texas is quietly building a strong pipeline into Arizona. The Longhorns signed four-star wide receiver Jake Smith and four-star tight end Brayden Liebrock in the 2019 class. Robinson is among the nation’s best running back prospects. He’s a true three-down back with the ability to carry the ball 20-plus times a game. His ability to catch out of the backfield is also a weapon Herman and his staff want from the running back position.

Recruiting at the position: Robinson is the high-profile running back Texas needed to land to erase the stigma of the position on the recruiting trail after missing out on Trey Sanders and Noah Cain in the 2019 cycle. Hullaby, an athlete from Bishop Dunne committed to Texas, plays running back in high school, but he expects to move around in Texas’ offense as an H-Back and short-yardage rusher. It wouldn’t be surprising if Texas keeps after a hybrid running back option in Ty Jordan from West Mesquite.