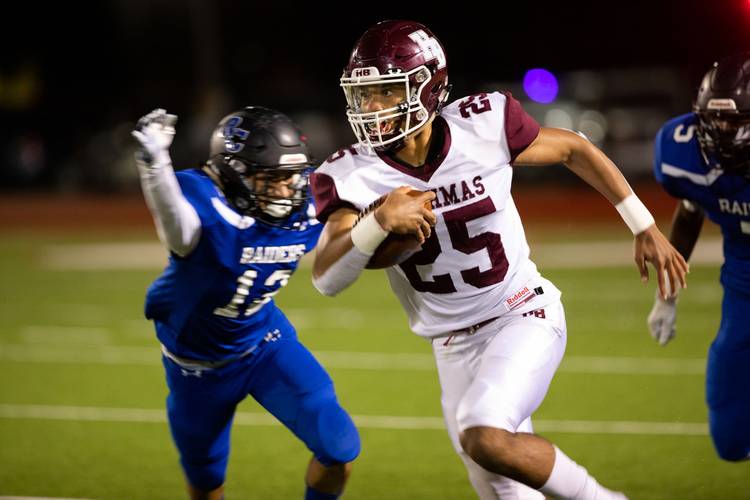 Texas’ 10th commitment of the 2021 recruiting cycle came Friday when three-star running back Jonathon Brooks. The Halletsville product is the first running back taken by the Longhorns in this recruiting cycle. Texas wants two running backs in 2021 with four-stars LJ Johnson and Camar Wheaton as the top prospects to fill the other void.

“They have a great coaching staff, they have a great football team and it’s close to home,” Brooks said. “They need running backs and they moved (Cuero graduate) Jordan (Whittington) to wide out so that opened another spot for me.”

Skill set: Brooks is a relative unknown on the recruiting circuit due to playing at Hallettsville, roughly 100 miles southeast of Austin. Not many recruiters make it to San Antonio, much less to the empty space between the Alamo City and Houston. That is to Texas’ benefit in a year when recruits can’t get around to multiple camps. Brooks remained a hidden gem throughout what is normally the spring evaluation period due to COVID-19 travel restrictions.

The three-star isn’t going to draw many headlines as a new recruit, but that won’t stem the excitement of Texas running backs coach Stan Drayton, who was clearly high on Brooks doing his junior season. The only other Power Five program to offer was Texas Tech. Brooks would be ranked higher if he played in a metroplex, and Drayton doesn’t care about recruiting rankings. Drayton played a major role landing Brooks.

“He kept it real and he taught me stuff before I committed,” Brooks said. “We had a Zoom meeting and he showed me some plays and some run schemes and what to look at before the play starts and stuff like that.”

Immediate impact: Texas’ running back room is suddenly a strength of the team if the available players stay healthy. A trio of Keaontay Ingram, Roschon Johnson and incoming five-star true freshman Bijan Robinson should lead the offense for the next two seasons. Brooks will be afforded a redshirt season unless his services are too valuable on special teams or a rash of injuries forces him into action like Johnson was last season.

Fitting into the program: Texas wouldn’t be so high on Brooks if Drayton, Tom Herman and the rest of the coaching staff weren’t convinced of his ability to find a role inside the program. Brooks is a high-upside player who oozes athleticism and brings the type of positional versatility the new offensive staff appears to be chasing in the 2021 staff. Nearly every player in Texas’ nine-man class can play at least two positions, including Brooks who is an excellent receiver out of the backfield.

Recruiting at the position: Texas wants two running backs in the 2021 class despite the depth on campus because Robinson could be NFL-bound in three years and Ingram could declare after the 2020 season. That would leave Johnson and Robinson on campus when Brooks arrives, as well as Derrian Brown if he returns from a brain injury. Texas wants to pair Brook with either LJ Johnson or Camar Wheaton.