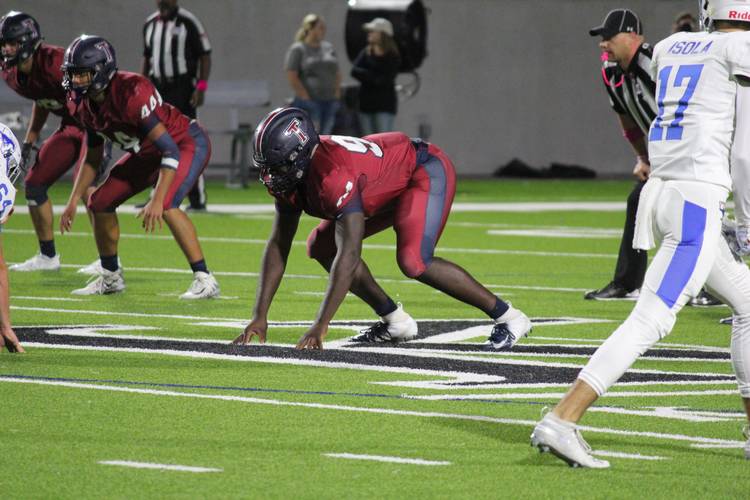 Making a name in the Brockermeyer household isn’t easy. Blake is the head of it. A former offensive lineman at Texas and in the NFL, his kids are following in his footsteps. One of his sons, Luke, plays linebacker for Texas. Another son, Tommy, is a five-star offensive tackle prospect in the 2021 class. He plays alongside his twin brother, James, at Fort Worth All Saints.

Tommy is blessed with a 6-6 frame that easily carries 280 pounds entering his junior season. James is a three-star center prospect watching his stock rise this summer as he adds weight. He weighed 200 pounds at this time last year. He’s now up to 250 pounds and rising. His rankings will rise with the scale. James already holds 11 offers and is ranked as the third-best center prospect in the country, per 247Sports’ composite ratings. He’s taking the attention with stride.

Extremely excited to announce that I have received an offer from The University of Texas! #HookEm 🤘🏻 pic.twitter.com/46zZEBN9j4

“It’s a lot more attention than I thought I would have at this point just due to where I was with my size last summer,” he admitted. “I would find it hard to believe I could gain 55 pounds in one year.”

“Gaining the weight is basically just lifting a ton and eating a ton,” James said. “Sometimes, I won’t even be hungry, but I just know that I have to keep eating in order to get bigger.”

Even James admits that there is a strong likely-hood that he and his twin brother end up at the same school. Tommy holds 21 offers and is considered one of the top offensive tackles in the entire 2021 class. Both hold Texas offers. Just like most assume the brothers will attend the same college, the prevailing opinion is that Blake’s legacy and Luke’s presence at Texas will play a heavy factor in their decision.

“I try not to let things like that factor into my decision, because at the end of the day, I am going to pick the school that fits me best,” James said.

An early offer on the other side of the football in the 2021 class was defensive end Tunmise Adeleye of Katy Tompkins. The 6-3, 260-pound four-star holds 26 offers and named Alabama at his current favorite. He also admitted that it’s changed multiple times and that he’s nowhere near done with the recruiting process. The Longhorns made a strong impression on him early and remain a team he considers.

“I have a lot of respect and love for the coaching staff at Texas because it was one of my early offers, and at the time coach (Tom) Herman wasn’t offering a lot of 2021 kids, so I knew it was special,” he said. “My mind changes on recruiting every few months.”

The recruiting process is sped up in modern times. Texas already holds a commitment for the 2021 class. Star players like Adeleye definitely feel the pressure to decide earlier than players in the past. His advice is to play it slow.

“I tell everyone who asks me for advice to wait things out and don’t feel pressured to make decisions,” Adeleye said. “If a school truly wants you, they’ll wait it out all the wait until signing day to make a decision.”

Adeleye is a household name in 2021 recruiting circles. He possesses 26 offers. It’s still a surreal fact of life for the big-bodied defensive end.

“I would’ve been surprised if you told me this would happen. I had friends who got early offers, but I didn’t really understand how big of a deal it was and how much attention it would bring towards me until I got older and further along in the process,” he said. “There is a lot of pressure on young guys in this process.”