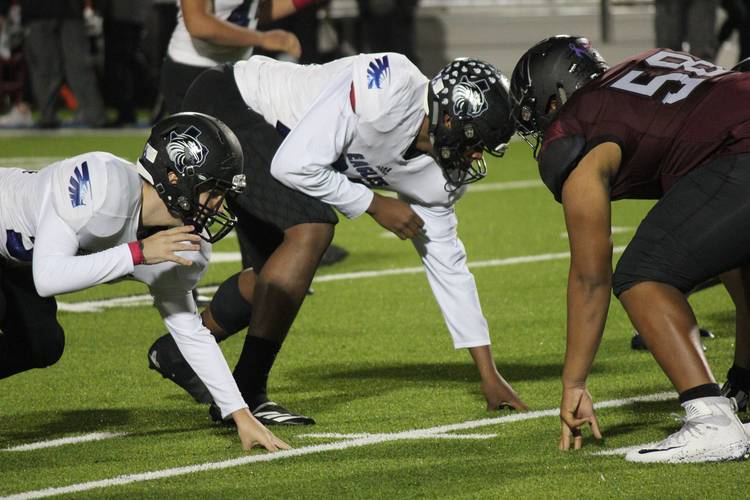 Texas hosted one of its on-campus football camps Sunday afternoon. Most of the attendees and participants were younger targets and prospects. Bastrop Cedar Creek defensive end Alfred Collins was the exception to the rule. The 2020 four-star is among Texas’ top defensive line targets in the cycle. The 6-5, 247-pounder ranks No. 13 on the Fabulous 55.

“I just wanted to work some technique,” said Collins of why he participated in the camp despite already holding offers from the Longhorns, Texas A&M and 12 other programs. Most recruits of his stature tend to use camps as an unofficial visit rather than to participate. Collins is a former basketball player still growing on the football field. He recognizes that the only way he reaches his potential is by soaking in as much information as possible.

“There’s a lot for me to still learn as a football player,” he said. “I’m just now scratching the surface. Extra work is good.”

Collins is in no rush to commit to a school, though he’s released a top five of Texas, Texas A&M, LSU, Oklahoma, and Alabama. Most in the recruiting industry feel its a two-team race between the Longhorns and the Aggies. Collins’ mom, Benita Pollard, played college basketball at Texas.

“I’m going to take all of my visits before I commit,” Collins maintained. “Texas is among my favorites because it’s a great school, a powerhouse program, and a great atmosphere.”

Collins was named the best defensive lineman in his district as a junior after recording 92 tackles, including 25 behind the line of scrimmage, and six sacks. He was a first-team all-district selection as a sophomore after posting 75 tackles and four sacks. The Longhorns have yet to gain a commitment from a defensive prospect in the 2020 class.

A pair of young stars from Bishop Dunne High School in south Dallas were among the top underclassmen on campus. Landon Hullaby is the younger brother of 2020 Texas pledge Jaden Hullaby. Landon is also emerging as the top safety in the 2022 class. He’s extremely athletic and versatile, playing safety, cornerback, and as the nickel corner against spread offenses. That’s the versatility Texas loves in defensive backs.

“The visit was good, and it was good being back around the coaches at Texas,” Landon said. He joined his older brother and teammate Jordan Crook on campus this weekend. “The coaches always bring good energy, and they’re starting to show a lot of interest in me.”

Landon says he feels no pressure to attend the same school as his older brother. Jaden agrees, telling his little brother to pick a program that’s best for him. Texas does hope Bishop Dunne becomes a pipeline program in the DFW area. Crook is a budding star at middle linebacker. He’s expected to start as a sophomore and is already 6-foot and over 200 pounds. He holds six offers and is on pace to be a future member of the Fabulous 55.

“I’m just trying to have fun with the process and see as many schools as possible,” Crook said. “Texas is a place I can see myself playing. I’m planning on coming back in a few weeks for the pool party. Coach (Todd) Orlando is a hard-nosed coach I could learn from.”