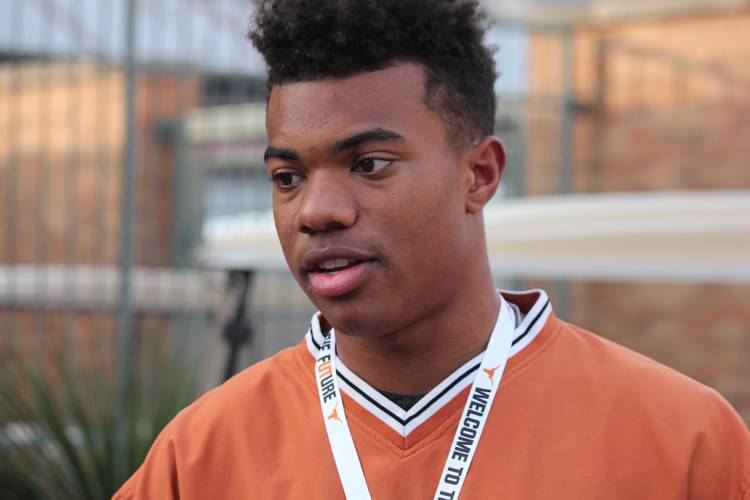 Austin is home to elite wide receiver talent in the 2019 class and Tom Herman is hoping prospects like Elijah Higgins (Austin Bowie) and Garrett Wilson (Lake Travis) decide to remain close. They both hold Texas offers and are high-priority targets for the Longhorns.

Both Higgins and Wilson were on campus Sunday for one of Texas’ junior days, which includes a tour of the campus, facilities and time with coaches and players. The trip was a short one for Higgins, a big-bodied 4-star wide receiver with potential to play tight end if he keeps adding weight to his 6-foot-3 frame.

“It is amazing being from Austin and experiencing this at Texas,” Higgins said Sunday. “I told my dad when we drove up that it felt different than the other visits so far because I’ve been here so much and I’m wanted in my own city. It means a lot to represent your city.” Higgins said Sunday after junior day. “Garrett is still uncommitted and we’re talking about sticking together and hopefully that being in Austin if it works out right.”

Wilson, ranked No. 7 on the Fabulous 55, remains uncommitted.

“We’re talking about sticking together, and hopefully that being in Austin if it works out right,” said Higgins, who’s ranked No. 39 on the Fab 55.

Wilson and Higgins recently met up with Texas quarterback commit Roschon Johnson to throw the football around at a local school. That bodes well for the Longhorns. A bond between the future Texas quarterback and elite wide receivers can’t hurt Texas’ chances with Higgins and Wilson.

“It was great. He told me why he was committed to Texas. I felt him out and listened,” Higgins said. “It’s important to know your future quarterback, so that could be big if we all ended up at the same college.”

Higgins also pointed to the academics at Texas, mentioning the business school and the sports science route. He said Texas made it a point to show what the school can do for athletes after their football careers end.

“They talked about networking and about how many CEOs come to football games,” he said. “That helps a lot because football will end whether you go to the NFL or not.”

Wilson and Higgins aren’t the only elite receivers residing near UT. Round Rock Cedar Ridge speedster Jaylen Ellis, who is committed to Baylor, visited the Longhorns and left impressed despite not receiving an offer.

“They said that if the offer did come, it would be later, but hold on tight,” Ellis said. “It would mean a lot. My grandma lives about two minutes from the stadium and staying around Austin would be special.”

Someone would have to change numbers but otherwise this could work @GarrettWilson_V @J4ylenellis @ehigggz pic.twitter.com/bBlLkJpRU2

Ellis didn’t seem put off by the lack of an offer and complimented the bluntness and honesty of Texas receivers coach Drew Mehringer. The state is stacked with wide receivers in the 2019 class and filtering through the amount of interest is a difficult task for a staff with limited scholarships available.

“Coach Mehringer makes a big impact. He’s straight-forward, which I like,” Ellis said. “A lot of other colleges beat around the bush, but not at Texas.”

Ellis is planning to visit Houston this weekend and Oklahoma soon. He mentioned regular contact with Texas, Ohio State and Vanderbilt. It’s safe to say he isn’t 100-percent committed to Baylor, but he did say it was still one of his top schools.

The focus at Texas’ junior days over the weekend was on the 2019 class, but that didn’t stop a few select 2020 targets from stopping by and receiving attention from the staff. One of those sophomores was Round Rock wide receiver Collin Sullivan. He’s yet to receive a Texas offer, but one is eventually likely.

“I want to build a great relationship with my future position coach and I feel like that’s what I have in coach Mehringer,” Sullivan said. “Today, I had great conversations with him about the school and the future. And it helps that this place is 25 minutes down the road.”

Sullivan not only pointed to the location as an advantage for UT, but also what could be his future teammates from the area if guys like Higgins and Wilson join the ranks.

“The local guys who are big targets right now are local wide receivers, and I’d love to be next on that list as a big target for Texas,” Sullivan said. “One of the things Texas talked about was representing the state and not leaving Texas. I liked to be part of keeping that talent close to home.”

Sullivan visited Texas for a camp and for a game. This was the first time he spent 1-on-1 time with the coaches and get into the film room to talk about the position at Texas. He also heard from recent signee Caden Sterns about the difference between high school and college.

“Texas wants playmakers at wide receiver. It doesn’t mind age or stars or any of that,” Sullivan said. “It’s basically a business and the best players will play if they do their job.”