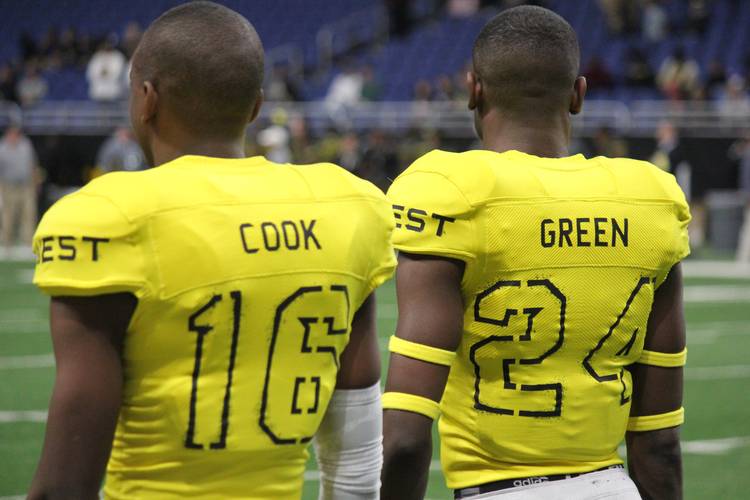 Any doubts surrounding Tom Herman’s ability to recruit with the elite programs in the nation for the top talent in Texas were answered during the 2018 recruiting class despite the product on the field taking minimal steps forward. A year after finishing with the 25th ranked class in the nation in his first crack at Texas, Herman’s program will ink a top-5 class come Feb. 7.

The main reason is the defensive backs that Herman, defensive coordinator Todd Orlando and assistant coach Jason Washington signed during the early period. Texas managed to sign the top three safeties and cornerbacks in the state, including the lone 5-star in Texas — BJ Foster.

Foster, a native of Angleton, led the charge of assembling the best players in the state. At safety, he’ll be joined by Caden Sterns and DeMarvion Overshown. The cornerback class includes 4-stars Anthony Cook, D’Shawn Jamison and Jalen Green.

“It started on junior day at Texas. We liked the scene around there and how the coaches did things,” Foster said. “We saw that the coaches were good guys trying to turn the program around so we said ‘hey, if we all go there, we can really do that’ so that was the original thinking.”

Foster committed in June, causing a domino effect for other members of the class. Sterns and Overshown joined over the summer, as did Green. Jamison picked Texas immediately following the Red River rivalry game. Cook was the final piece, choosing the Longhorns over LSU and Ohio State live on ESPN.

“I wanted to stay home,” Cook said. “I also know I’ll be going to a school with a lot of guys I know and trust to help me win football games. We’re prepared to bring Texas back to championships.”

I’ll wait for you to name a better DB group than the #revolUTion18 @_ACook21 #hookem🤘🏾 pic.twitter.com/7itTQyaQHA

Texas lost starting cornerback Holton Hill and starting safety DeShon Elliott to the NFL draft, leaving open spots for the true freshmen to compete for snaps. Sterns, Foster and Cook will enroll early at Texas, participate in the offseason drills and compete during spring practice.

“It’s a big help to get to Austin and start learning how to be a college player months before the rest of the class. Going through spring practice will give us all an advantage over the rest of the class,” Sterns said. “The Big 12 is the perfect conference for a defensive back. We’ll get plenty of chances to showcase ourselves for the NFL.”

The narrative may be overblown but it is true that the Big 12 is pass-happy. The amount of spread offenses around the conference make it an attractive spot for offensive skill players. It also helped Texas lure the best six defensive backs in the state. There will be plenty of action for all six of the signees, and that’s what they wanted.

“It’ll be a challenge playing in the Big 12,” Green said. “The offenses pass it around a lot, so it gives us a chance to make plays. This class should help put DBU back on the map.”

The challenge of signing so many star players in one position group is convincing them enough playing time exists for all involved. None of these guys plan on sitting on the sideline and a few of them would’ve gone elsewhere if the possibility of immediate playing time, and the right defensive scheme, weren’t available at Texas.

“Not everyone is built to play defensive back in the Big 12. The Big 12 is different because of the spread and the pass offense,” Jamison said. “The scheme that I love to play is nickel and in the Big 12 that is one of the base defenses. We’ll have five to six defensive backs on the field at one time to match up with Big 12 offenses. We’re all going to play a lot.”

The NFL is the goal for 99 percent of elite prospects on the recruiting trail. Winning championships also plays into the equation, as does tradition. These players say their first memories of Texas football were of Vince Young winning championships.

It was also a time when the Longhorns were the unquestioned DBU. Defensive Back University can now be claimed by LSU, something the 2018 signees want to rectify.

“Bringing back DBU is important,” Jamison said. “We all got together and said we’re going to do everything we can to be successful and bring back DBU to its rightful home at Texas.”

Texas is still Texas, even if the recent record doesn’t reflect dominance. The name still rings bells for teenagers, especially with the renewed energy brought into the program by Herman and his staff.

“I grew up watching and loving Texas. Playing there is the biggest stage in college football,” Overshown said. “We want it to be special again. For it to be like when we grew up. There is plenty of work to do and we know that, but we’re all up for the challenge and trust the coaches and the vision at Texas.”