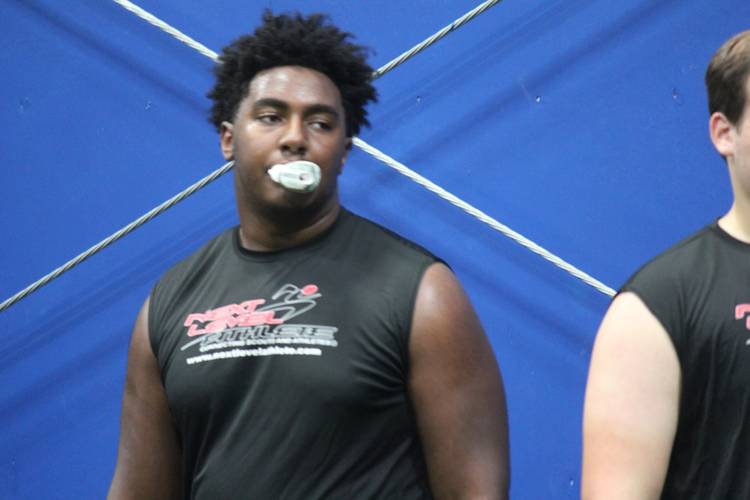 The biggest domino, literally, in the state for the 2020 cycle is offensive tackle Chad Lindberg. The four-star prospect from Houston Clear Creek is the top-rated offensive lineman in the state and the No. 7-ranked player on the Fabulous 55. He’s the eighth-ranked tackle in the entire country, per the 247Sports composite rankings.

Lindberg is among two priorities remaining for Texas’ offensive line class with the other being Damieon George of Galena Park North Shore. Three linemen are already committed to the Longhorns. Lindberg is considered the best, and the type of player other prospects gravitate toward.

“We all know that if we all went to the same place, we could make a real impact,” Lindberg said at The Opening regional in Houston on Sunday. “I’ll be at Texas’ spring game and I think we’ll have a group with Vernon (Broughton), Damieon and Zach (Evans).”

Lindberg also mentioned the four UT pledges also visiting that weekend. Texas sped up the recruiting process in the 2020 cycle as the landscape continues to evolve with the advent of the early signing period. Texas didn’t gain its fifth commitment of the 2020 cycle until May 1. Tom Herman’s program had already hit that mark before the de-commitment by Mookie Cooper.

Lindberg wants to commit by the end of the summer and stated that Texas and Stanford are two of his top three schools with programs like LSU, Georgia, Oklahoma and Texas A&M jockeying for the third spot. The Longhorns are in the mix because of familiarity and his bond with current offensive line commitments Jake Majors, Logan Parr and Jaylen Garth.

“I talk to those guys daily as friends. They pitch me, but they know how to not be annoying about it,” Lindberg said. “I know people at Texas, so I can talk to them about the classes. I also like the coaching staff at Texas a lot, and their facilities at Texas are second to none.”

Texas offensive line coach Herb Hand is already concentrating on the 2021 cycle of linemen while finishing up his 2020 group. The best of an historically stacked group of line prospects might be Houston Bellaire Episcopal tackle Donovan Jackson. He dominated throughout Sunday’s event alongside fellow classmates Bryce Foster and Hayden Conner.

“We’re always comparing what we’re doing and keeping each other accountable. That makes us all better,” Jackson said of the relationship he’s built with the other elite linemen in his class from Houston. “It’s great because we can relate to what we’re all going through at the same time.”

Jackson plans to visit Ohio State for its spring game on April 13 — the same day that Texas, and numerous other top programs, hosts its spring game. It’s a scheduling conflict that multiple prospects in Houston complained about when discussing recruiting.

“It’s awful because all of the spring games are on the same day and my mom was upset we’re missing Ludacris at Texas,” Jackson half-joked. Ohio State is a major player for Jackson because his family members are natives of the state. He’s the only Texan in his family.

“I’m excited to get back to Ohio because that is where most of my family is there. I was raised a Buckeye,” he said. “My mom carries two buckeyes in her purse. She makes candied buckeyes for dessert sometimes. They were the second school to offer me and since then I’ve held them in high regard.”

The Longhorns are also in the mix for Jackson — and his group of friends.

“I’ll try to be there for a practice because I want to see how they operate,” Jackson said about his plans to visit Texas before the spring game. “That’s a program we’ve talked about as a group.”