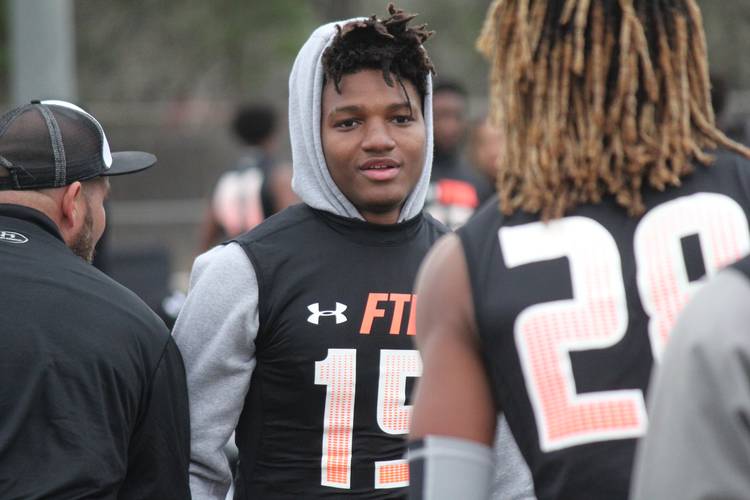 The Longhorns enjoy the title of DBU. It’s a mythical title, sure, but it is a point of pride built on the foundation of Earl Thomas, Aaron Ross, Michael Huff and others who played in Texas’ defensive backfield in the glory years under Mack Brown. The Big 12 requires talent at cornerback and safety. The Longhorns are amassing that talent through recruiting.

Texas fans watched freshmen Caden Sterns and B.J. Foster blossom into starters in 2018. Anthony Cook and Jalen Green are primed for breakout seasons at cornerback as sophomores. Texas signed four defensive backs in the 2019 class. The future is as bright as the past.

Assistant coaches Jason Washington and Craig Naivar deserve a bulk of the credit. Washington handles the cornerbacks while Taylor native Naivar patrols the safety position. Each is starting to isolate their top targets in the 2020 class with three of those potential targets on campus last Saturday for Texas’ junior day.

The latest to join the offer list was Joshua Eaton. The cornerback from Aldine MacArthur received an offer during junior day. The 6-2, 175-pound prospect is of similar build to recent cornerback signees Cook and Green. The offer was gratifying, but it wasn’t exactly a surprise.

“I had great conversations with coach (Jason) Washington leading into junior day and thought I’d get an offer,” Eaton said. “I always watched Texas when I was young. It was a big offer for me.”

The last month was a whirlwind for Eaton. He’s become a hot commodity on the recruiting trail after flying under the radar as a sophomore and junior. He’s yet to hold a star rating from the 247Sports composite rankings despite getting offers from Oregon, Texas and LSU since Feb. 16.

“Recruiting for me really picked up and I try to enjoy it. It’s amazing,” he said. “I never thought I’d be in this situation. I’m just having fun with it right now.”

A player more used to the recruiting circus is Houston King four-star safety Bryson Washington. The 6-2, 196-pounder holds 19 offers and ranks No. 24 on the 2020 Fabulous 55. He’s one of several targets in the 2020 class from Houston.

“Texas has great coaches. They love their players and try to build a connection with you beyond football,” Washington said. “Texas is high on my list and I don’t expect that to change.”

Washington says he’s in no hurry. He’s indicated in the past that he’d like to announce on July 4. It’s not about finding the right football fit for Washington, at least not entirely. He goes on these unofficial visits to immerse himself in the school.

“I’m looking for the academics and the community. I’m trying to find a place I can call home,” he said. “I know what the schools offer on the football field. Football doesn’t last forever and it isn’t the whole college experience, so I’m trying to get a better feel for what it’s like to be a football player and student at these schools.”

It could be a two-school race between Texas and Texas A&M for three-star safety Xavien Alford. The No. 36-ranked player on the Fab 55 holds 32 offers and considers himself the most versatile safety in the class. At 6-1 and 181 pounds, he’s a Swiss army knife defensive back with potential to play nickel or either deep safety position. He was a key defensive member of an Alvin Shadow Creek team that reached the state championship game in its first year of varsity football.

“Versatility makes you more valuable and it’s easier to get on the field early if you can play multiple positions,” he said. “Texas feels like home. They rolled out the red carpet for me like coach Herman told me they would and it met my expectations.”