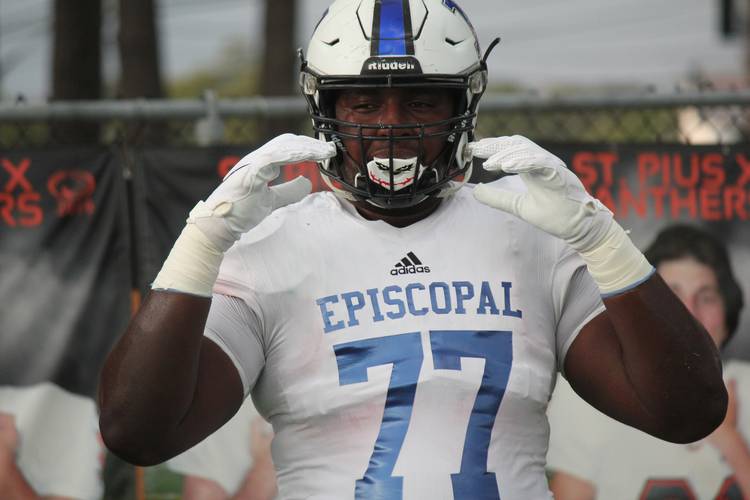 HOUSTON — The state of Texas is full of beef in the 2021 class. And there are more than a handful of four-star talents, and a couple of five-star prospects, in the state for 2021. Texas landed the first punch when it gained a commitment from four-star Katy Taylor offensive tackle Hayden Conner. The four-star is one of eight pledges for the Longhorns in the 2021 class.

Houston Bellaire Episcopal offensive tackle Donovan Jackson is another four-star talent from the Houston area that Tom Herman and offensive line coach Herb Hand hope to land. The 6-4, 308-pounder was named the offensive line MVP at The Opening Finals over the summer despite being the only 2021 prospect at the position.

He’s a dominant force who could end up as a guard long-term because of his lack of length.

“I’ve improved my hand placement and my ability to reach the second level of defenses,” Jackson said after Episcopal’s loss to Houston St. Pius X on Friday night.

He was one week removed from taking in Texas’ loss to LSU. Jackson was among an elite group of prospects in Austin for the clash between the Longhorns and the Tigers. Jackson came away impressed despite the loss.

“The Texas visit was amazing,” he said. “The atmosphere and everything about Austin was electric. Even in a loss, I’m still excited for the future.”  Jackson indicated he’s yet to arrive on a timeline to commit to a school. Texas is among his favorites along with Stanford and Ohio State. Jackson’s family is originally from Ohio, while Stanford recruits offensive linemen well and offers an elite education.  “Education and the alumni network are deciding factors for me,” he stated.

Conner is among the UT commits lobbying Jackson to join the fold.  “Jalen (Milroe) and Hayden (Conner) were on me a lot for a while,” he joked. “I told them to calm down.”

There’s a reason Conner wants Jackson to join him at Texas.

“Donovan is an extremely versatile player. He can play any position on the line and performs well at all of them. I’ve been to a lot of camps with Donovan, and he’s a guy that I would love to play with in college,” Conner said. “I tell him that every time I see him, so I guess you could say I’m working him pretty hard.”

Texas expects to take five or six offensive linemen in the 2021 cycle. With Conner in the fold and Jackson trending towards the Longhorns, who are the other pieces Texas hopes to add?

The five-star son of Texas legend Blake Brockermeyer, he’s the top-rated offensive tackle in the country for the 2021 class, per 247Sports’ composite rankings. The 6-6, 283-pounder is recovering from offseason surgery on his shoulder. He’s the top priority for Hand in the 2021 cycle.

Tommy’s twin is no slouch. At 6-3, he’s a three-star interior prospect expected to be the center for Texas’ 2021 class. He’s the third-ranked center prospect in the country. Texas hopes the family ties and proximity win out over programs like Clemson.

No offensive line prospect in the state possesses more upside than Byrd, who’s a five-star athletic freak for a teenager checking in at 6-5 and 265 pounds. He isn’t as polished as the Brockermeyers or Jackson, but his combination of size and footwork makes him an intriguing prospect with NFL potential. Duncanville’s quarterback, Ja’Quinden Jackson, is already pledged to Texas in the 2020 class.

Foster is the top-ranked guard in the country. The 6-4.5, 318-pound four-star is a bully at the point of attack and one of the strongest players in high school football. He’s also teammates with Conner and played youth football with Milroe, giving Texas a chance. Texas A&M and Oregon are also in the mix.