Texas added its fifth commitment of the 2019 cycle on Tuesday when four-star cornerback Kenyatta Watson II chose the Longhorns over Notre Dame. He was the first defensive back to pledge to Tom Herman’s program in the 2019 class. The Longhorns landed the top six defensive backs in the state last cycle.

Herman hopes the recruiting momentum continues with at least one more commitment by the end of this weekend. Cal graduate transfer running back Tre Watson announced via Twitter that a decision is looming. He’s taken official visits to Texas Tech, Texas and LSU with the Longhorns predicted to win his services.

The Longhorns also plan to host top targets NaNa Osafo-Mensah, Brayden Liebrock, Tyler Johnson, Makiya Tougue and Derek Stingley. Osafo-Mensah is scheduled to pick between Notre Dame and Texas on May 19. The state’s best pass rusher already took his official visit to Notre Dame and indicated at The Opening in Dallas last weekend that it was a “50-50” race heading into his official visit to Austin.

“I’m wanting to see how my family reacts to the visit,” Osafo-Mensah said on Sunday after earning an invitation to The Opening Final at a regional camp at Euless Trinity. “I want them to be part of my decision and their opinion matters to me.”

Liebrock, Tongue and Stingley are out-of-state prospects with UT offers. Liebrock is a tight end from Chandler, Ariz., and  Tongue is a four-star athlete from Louisiana who can play wide receiver or linebacker. Liebrock took in a spring practice in Austin and is returning for an official visit. Wilkins was offered after visiting Texas for junior day. Stingley is the top cornerback in the country and a LSU lean.

New offer out at offensive tackle

The Longhorns need to sign two offensive tackles in the 2019 cycle. And three would be preferred. Texas feels good about its chances with five-star tackle Tyler Johnson of Conroe Oak Ridge, who will take his official visit this weekend. Texas also is in the mix for in-state targets Javonne Shepherd and Kenyon Green, as well as Arkansas native Stacey Wilkins.

The Longhorns decided to throw another name into the ring Wednesday night when an offer was extended to Katy Taylor product Andrew Coker. The three-star picked up an offer from Texas A&M and Texas Tech in April and planned to pick a destination this month. The Texas offer might alter those plans.

WOW!!! I’m truly blessed to say i have received an offer from my childhood favorite The University of Texas!!#HookEm 🤘🏾 pic.twitter.com/AvlRbMj8xP

“I think I will end up pushing things back,” Coker said. “Coach Hand came back by our school (Wednesday) and decided to offer. Coach Hand is a tremendous coach who did big things at Auburn.”

Coker once was committed to Florida. He should earn a fourth-star on the 247Sports composite by the end of the cycle. Coker reshaped his body as a junior and can now move with the best defensive pass rushers in the state. Coker, a 6-6, 310-pounder, possesses the frame to be a future left tackle and showcased his progression at The Opening regional in Houston.

Recruiting moved into warp speed when the early signing period became a permanent fixture. The 2019 class is the first one allowed to take official visits before the start of players’ senior years and most of the elite prospects are taking advantage. Not all of them are in a hurry to announce, however. Katy Cinco Ranch inside linebacker David Gbenda is one of the players taking his time.

“I’m in the evaluation process and focusing more on the high school part of football,” Gbenda said. “I need to get better as a player and a better leader. That will lead me to where I need to be. It’s still too early to separate schools. I’ll worry more about recruiting in the summer.”

Gbenda broke his hand in the offseason and was cleared for full-contact practice on Tuesday. He’s the only in-state middle linebacker with a Texas offer. He’s excited about the new direction of his defense, which he says will free him up to blitz and use his speed.

“It feels good to be back with my team and putting in work to get better as a team. My only real focus right now is on spring ball and improving before the summer,” Gbenda said. “My hand is cleared and I’m good to go. I think our team is poised to shock some people this season. We have a lot of talent coming back and some guys who are ready to step up.” 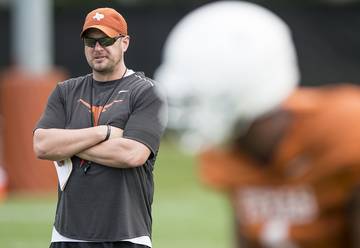