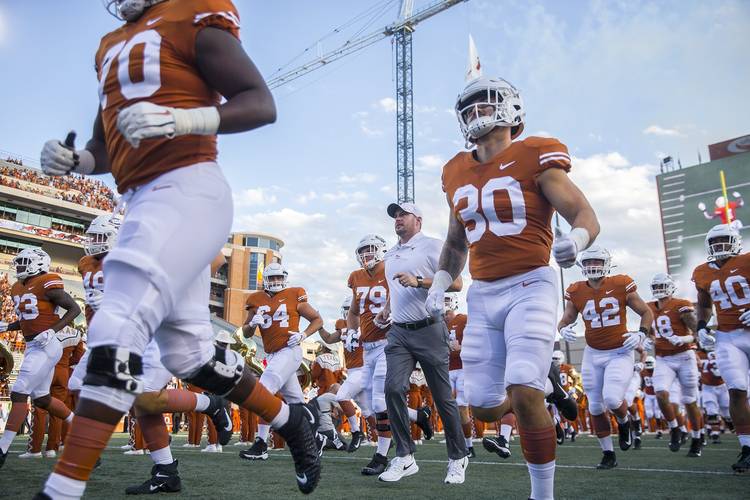 Texas Longhorns Head Coach Tom Herman runs onto the field with his team during an NCAA football game against Kansas Jayhawks on Saturday, Oct. 19, 2019, in Austin, Texas. [RICARDO B. BRAZZIELL/AMERICAN-STATESMAN]

The 2020 recruiting rankings haven’t changed much since the start of the football season. The acceleration of the process due to the advent of the early period made the spring and summer as important to building a recruiting class than the actual season. Texas and Oklahoma remain the class of the conference. Oklahoma, which possesses the 10th-ranked class in the nation, is 25 spots in front of third-place Iowa State. It’s another example of the talent gap between the top two and the rest of the Big 12.

Texas is poised to top the Big 12 for the third year in a row. Texas is now at 20 commitments after the flip of four-star wide receiver Troy Omeire from his pledge to Texas A&M. The class is headlined by five-star running back Bijan Robinson, a pair or talented quarterbacks and three of the best defensive linemen in the state. The Longhorns hope to add Bastrop Cedar Creek defensive end Alfred Collins to the list. Texas is also chasing at least more commitment at the wide receiver position.

Five of Oklahoma’s top six-rated recruits are Texans. The Sooners even went to Houston and beat Texas straight-up for four-star safety Bryson Washington. The continued success and dominance of the Big 12 on the football field can only help Lincoln Riley keep pace with the Longhorns on the recruiting trail. Five-star running back Jase McClennan from Aledo might be the top running back in Texas.

Head coach Matt Campbell committed his next few years to Iowa State after the 2018 season and that should help cement the program as the third-best in the conference. It’s certainly helping in recruiting, where Iowa State already ranks 11 spots ahead nationally in the 2020 class than it did for its final ranking in 2019. Two quarterbacks headline the group along with Jackson, a wide receiver from Cibolo Steele.

The first step to turning around the Jayhawks is to infuse talent into the program. Les Miles can recruit, and he’s already showing that ability at Kansas. The Jayhawks’ 2019 class ranked 70th in the nation. A near win over Texas should help with the three-star prospects in Texas who are overlooked by Texas and Oklahoma. Kansas beat Texas for outside linebacker Brennon Scott, who is a member of the 2020 Fabulous 55.

Two of Oklahoma State’s top  four-rated recruits hail from Waco Connally. Mike Gundy was able to land guard Trent Pullen and cornerback Korie Black from there. The class is headlined by big-armed quarterback Shane Illingworth of California. Five Texans are pledged to the Cowboys. The class is heavy on offensive and defensive linemen.

TCU has jumped two spots from eighth to sixth in the Big 12 since the start of the season. The addition of four-star defensive tackle Patrick Jenkins helped the Horned Frogs jump Texas Tech and Kansas State. It’s still a small class for Gary Patterson, who hopes to reach at least 20 pledges by national signing day. The Horned Frogs could save a few scholarships to use on the grad transfer market.

Talent is on the way to Lubbock if head coach Matt Wells can keep the class together despite a lack of success on the field. Brooks, a Manor product, is a borderline four-star running back who can help change the culture in Lubbock. Polk is the best wide receiver in East Texas, while Miles Price can play offense or defense. Wells’ task is to find another handful of prospects to add to his existing bunch by national signing day.

It appears that Kansas State is going to rely more on high school recruiting than it did under Bill Snyder, who liked to focus on the JUCO ranks for instant starters. The 2019 class ranked 62nd in the nation. Head coach Chris Klieman is well above that mark in his first full cycle. Harris is from Alvin Shadow Creek.

A 7-0 record hasn’t jump-started Baylor’s recruiting efforts. The Bears remain the lowest-rated recruiting class in the Big 12 with just 13 commitments and not a single four-star prospect pledged to Matt Rhule’s program. The success on the field should help Rhule round out this class with quality talent.