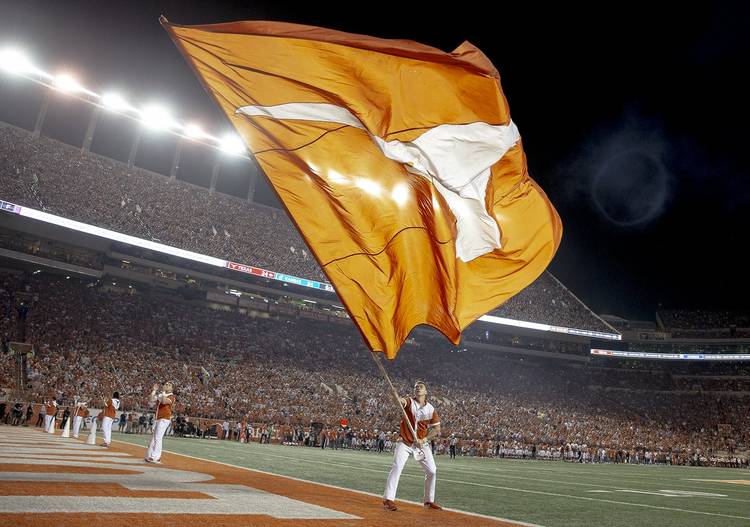 Texas signed 19 prospects in its 2020 recruiting class after adding a pair of letters of intent on national signing day, following 17 signings in the early period. Four-star wide receiver Kelvontay Dixon was the lone signing day addition to the offensive class.

Texas’ class ended ranked ninth in the nation and first in the Big 12. Here’s how the Longhorns’ offensive recruits graded out. We’ll grade the defensive class on Tuesday:

No program in the country signed a better duo.

Jackson and Card are elite players with athleticism and a pedigree for winning. Card led Lake Travis to the state semifinals as a junior and senior. He’s a former all-district wide receiver. The local talent will enroll early and get a head start learning an offense similar to the one he’s run at Lake Travis.

Jackson suffered a torn ACL in Duncanville’s state semifinals win over Rockdale. It was a disappointing end to an epic career. Jackson helped rejuvenate the south Dallas program. He never lost a regular-season game. One of his two career losses in three years as a varsity starter came in last year’s Class 6A Division I state championship loss to Galena Park North Shore.

Both quarterbacks should redshirt in 2020 and compete for the starting spot in 2021 after Sam Ehlinger has left.

Robinson, from Tucson, Ariz., is the highest-rated running back Texas has signed since Aledo’s Johnathan Gray in 2012. Between December and February, Robinson overtook Galena Park North Shore’s Zachary Evans — another five-star, and the top-ranked prospect in the state of Texas — for the top ranking in the county among running backs. He rushed for more than 5,000 yards in his high school career.

The 6-foot, 200-pound five-star chose Texas over Ohio State and other programs that have had more recent success than the Longhorns. His close relationship with UT assistant coach Stan Drayton and the city of Austin clinched it for Texas. He’ll immediately contribute in the backfield and could allow 2019 signee Jordan Whittington to move back to slot receiver.

Wide receiver was the only position to add a player since the early signing period in December. Dixon, a four-star from Carthage, picked the Longhorns on the eve of signing day, and will join his brother, UT running back Keaontay Ingram. Dixon projects to slot receiver.

Texas lost its top-ranked wide receiver commit two days before the early period started when Temple’s Quentin Johnston flipped to TCU. He signed with the Horned Frogs. Omeire (6-3, 206) remains the lone outside receiver of the group. The Fort Bend Austin product is a freak athlete with tremendous upside. He enrolled early.

Harrison is an athlete destined for a future at slot receiver. Herman’s offense is built around productivity at the slot — Devin Duvernay led the country in receptions and Jake Smith caught six touchdowns as a freshman from the slot. Harrison hopes to be next in line as a productive, explosive weapon. He could also help on special teams.

We need to place Hullaby somewhere in the class and tight end seems the most appropriate even if he’s not truly a tight end.

He describes his future role as a Swiss Army knife-type able to line up in multiple spots. He’ll play H-back, some tight end, flex out and is capable of playing running back in short-yardage situations. The three-star doesn’t draw headlines, but he’s the type of player the Longhorns need to utilize Herman’s entire offensive playbook.

Texas did a great job landing four solid players for the future.

Majors and Parr plan to enroll early and both should slide inside to guard or center after prep careers spent at left tackle. Karic added 40 pounds to his frame and blossomed into a four-star prospect and ended his senior year as a member of the Fabulous 55. Garth missed his senior season with a knee injury.

All four should redshirt. That’s how Herman handled the last two classes. A sign of a healthy program is having older players who can allow the younger guys a chance to turn potential into progress behind the scenes. Most offensive linemen aren’t ready for college football in their first year.