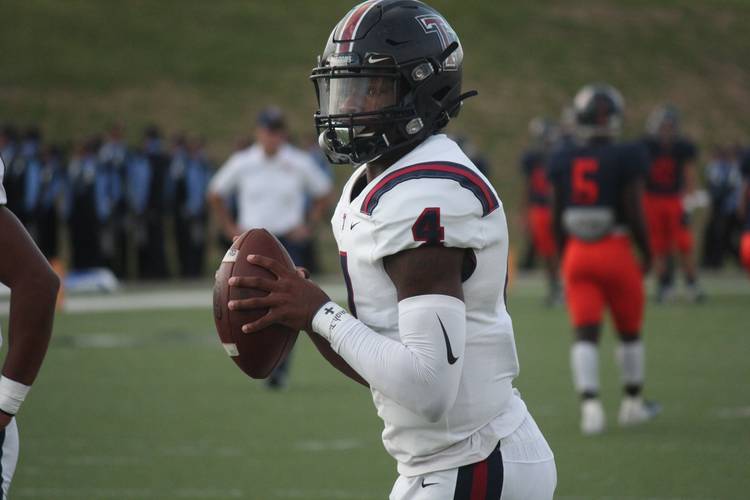 SUGAR LAND — Jalen Milroe is a winner. Need proof? The Texas commit was a freshman when Katy Tompkins finished the 2017 season with an 0-7 record. A new program in a hotbed of talented teams needs a star.

Enter Milroe. As a sophomore, he led Tompkins to its first ever playoff berth. This season, now a junior, he led Tompkins to a 9-1 record in the regular season. Last Friday, the future Longhorn led his squad past an undefeated Fort Bend Travis team despite three turnovers in the first half.

“I had some learning moments in the first half, but we bounced back and moved the ball. We need to do a better job keeping the defense off the field,” Milroe said after forcing passes early in the bi-district contest. “It feels great to get the win after a great week of practice. It feels great to have another week to play football for our seniors.”

Milroe already talks like a veteran quarterback. He sticks to the talking points that Tompkins’ coaching staff hammers home throughout the week. The clichés should remind fans of what Tom Herman preaches in Austin.

“We want to go 1-0 each rep and finish. We were doing too much and we just needed to trust ourselves and do our job,” he said. “Our ultimate goal is far down the road, so we’re just taking it a game at a time and focusing on what we can handle.”

Milroe passed for four touchdowns in the victory. Now Houston Cypress Falls is the challenge in the area round. A win would put Tompkins into unchartered territory as a program. The four-star dual-threat quarterback hopes to achieve the same impact once he reaches college. He’s sticking by Texas despite its lackluster season. Milroe was on campus to watch the Longhorns beat Kansas State two weeks ago.

“I’m super solid with Texas,” Milroe said. “I have a great chemistry with their staff and the atmosphere. I love coach Beck and Herman. I love Texas’ heart and commitment to their teammates. I’ve been in the locker room and seen the camaraderie within the team. I love the offense and I think the program will get in the right direction.”

Milroe is one of seven UT commitments in the 2021 class. Four are still alive in the state playoffs. It would be five if Lake Travis tight end Lake McRee wasn’t sidelined with an injury. The group ranks fourth in the nation and first in the Big 12 despite the recent decommitment of four-star wide receiver Quay Davis. Milroe is the second highest-ranked prospect in UT’s class, trailing Denton Ryan athlete Ja’Tavion Sanders, who Texas feels is a future B-backer or defensive end.

One player unlikely to join Milroe is his teammate, four-star defensive end Tunmise Adeleye. The junior could be the best defensive lineman in the state for the cycle and is focusing on a group of schools that doesn’t include the Longhorns. He plans to commit on Jan. 8.

“I’m ready to get it over with and go back to being a normal teenager,” Adeleye said. “We talked back in the regular season and I was thinking of doing it next summer, but the process weighs on you with all of the texts, calls and visits.”

He wouldn’t go as far as to say Texas is completely out of the running. He mentioned Texas A&M, LSU, Alabama, Ohio State and Oklahoma as the programs he’ll focus on.

“Texas recruited me hard and they aren’t 100% out of my recruitment,” he said. “I just felt like it was in my best interest to narrow it down to five schools and Texas wasn’t in that group.”