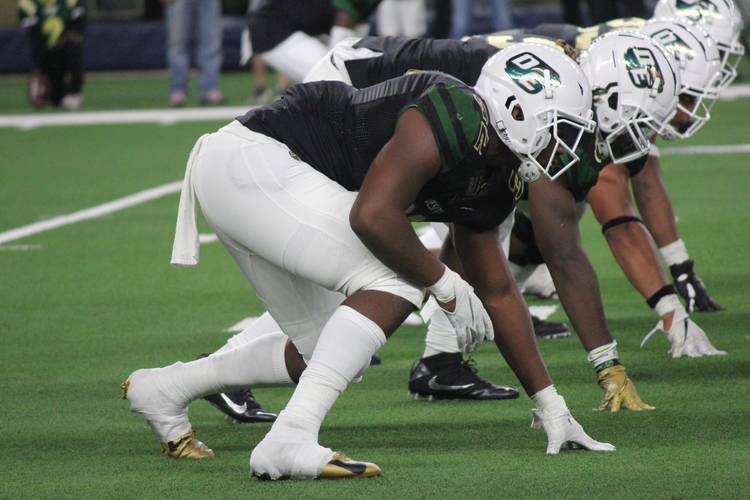 The Dotted Line is focusing on the 2021 Fabulous 55, breaking down the skill set and recruiting situations of each player on the list, continuing with Nos. 40-36:

No. 40: James Brockermeyer, center, Fort Worth All Saints

Brockermeyer is overshadowed by his brother Tommy, a five-star offensive tackle. He’s an interior lineman without the sheer size of his twin. The brothers are the hottest commodities of the 2021 cycle.

Brockermeyer is positioning himself as an elite center as he continues to add weight and strength to a once slender frame. His top five schools are Texas, LSU, Auburn, Alabama and Clemson. He’s scheduled to take an official visit to Texas in June if recruiting rules are back to normal.

The cycle is loaded with in-state offensive linemen and Brockermeyer is not a plus-one to his higher-rated brother. He’s a strong center prospect with high upside and undeniable technique. His father, Blake, was a lineman at Texas and in the NFL. The Longhorns feel good about their position with the Brockermeyers, but Texas must convince the family that the program is heading toward national contention.

Roberts moved to Houston from Kansas before his junior year and immediately became a starter on a Class 6A state championship offensive line. He’s a big, powerful figure who already looks like a college lineman with his size and ability to move. His offer list includes Alabama, LSU and Auburn.

Roberts is one of three in-state linemen to hold a Longhorns offer. Donovan Jackson, the No. 1-ranked player on the Fab 55, is pledged to Ohio State while four-star Bryce Foster is still uncommitted. Texas hasn’t had success recruiting at North Shore in the past few cycles, and it looks like Roberts is headed back out of state once his prep career ends.

Turner is a big-bodied defensive end with a high motor and surprising athleticism for a prospect his size. He plays on the edge for a talented DeSoto squad that reached the second round of the Class 6A Division I playoffs.

Turner could grow into an athletic, disruptive three-technique defensive tackle. Turner was a first-team all-district selection as a junior and sophomore, registering 124 tackles and 12 sacks in his two-year varsity career. The Longhorns are in a battle with Oklahoma, Alabama and others for his services. Texas is extremely high on him. The Longhorns signed three potential defensive tackles in 2020 and need to load up on ends in 2021. Turner is among the top priorities for defensive line coach Oscar Giles.

Liggins began his prep career at Coppell, earning all-district defensive newcomer of the year honors as a defensive back. He moved to slot receiver at Guyer and flourished with his skill set. He’s an underrated recruit on the national level who should move up with a strong senior season at Guyer, a state championship contender in Class 6A. His offer list includes Texas A&M, Georgia and SMU.

Washington is a long, rangy cornerback and a two-time second-team all-district selection in one of the toughest Class 6A districts in the state. The Longhorns offered him on Nov. 9, the same day Alabama offered. He’d added Florida State and Penn State in 2020 and was scheduled to take an unofficial visit to Ohio State before the Buckeyes announced that the program would not allow prospects on campus amid the coronavirus outbreak, which has since been adopted by the NCAA.

Texas signed only one cornerback in 2020 — Kitan Crawford, who could wind up at safety or nickel. Potential starters like Jalen Green, Anthony Cook and D’Shawn Jamison would be seniors when the 2021 class arrives on campus. This is an important recruiting cycle for the Longhorns at cornerback in order to build depth behind the current talent on campus.