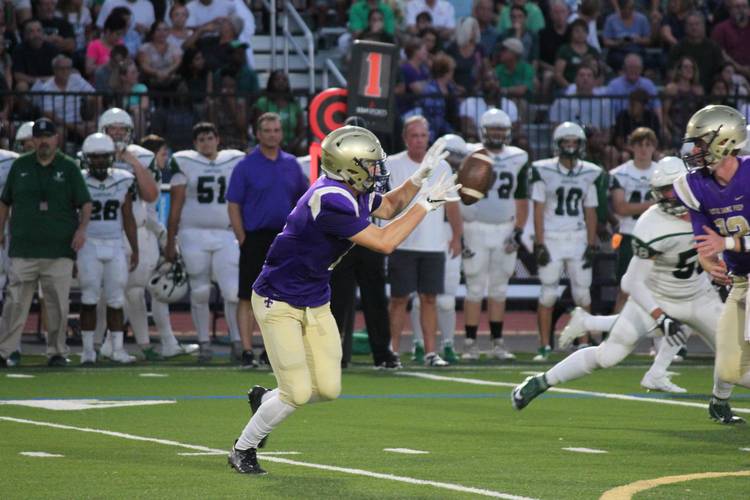 SCOTTSDALE, Ariz. — Texas commit Jake Smith didn’t head to Austin for the Orange-White game in April hoping to meet Jordan Shipley. Smith, a four-star slot receiver from Notre Dame Prep in Arizona, had never heard of the Shipley brothers and their exploits as Longhorns.

Shipley, though, had heard of Smith and the former Longhorns star spent time with the then-Texas target, discussing the legacy of wearing No. 8 and its Longhorns lineage.

“I didn’t grow up knowing anything about Texas or Texas football, other than it is like a religion there,” Smith said on Friday before his Notre Dame Prep team beat Sunnyslope High. “Talking to Jordan taught me a lot of things, and he sold me on Texas.”

Smith left the spring game high on the Longhorns. The do-everything offensive weapon was down to Texas and USC. Most pegged him for Los Angeles. The blonde-haired Smith oozes California swagger. He looks like a surfer. He plays like a football player. There was one thing working in Texas’ favor, however, and that was the city of Austin. Enjoying the California lifestyle is one thing. Living there was a whole different issue, Smith said.

“I love California, but I hate Los Angeles,” he said. “I couldn’t envision myself living there. I fell in love with Austin on my trip to the spring game and then on my official visit in the summer. It’s got everything you want in a city, and its not overwhelming.”

Last season, Smith, who stands 6-1, became the first player in Arizona to rush and receive for more than 1,000 yards since Christian Kirk in 2011. It helped Notre Dame Prep reach the Class 5A state championship game. He’s a rare athlete. Smith is also the punter for Notre Dame Prep. He began his athletic career as an elite baseball player on travel teams, building a reputation as a future prospect in center field.

That changed for Smith in the ninth grade. It was his first year of organized football. He had played the sport before, but not in the way we think of middle schoolers participating in the sport inside Texas. It’s glorified Pop Warner in Arizona until the high school ranks. Smith quickly realized he wanted to trade the baseball diamond for the gridiron.

“Baseball never gave me the feeling football gives me. It’s the brotherhood of 60 guys working for one goal. Baseball was more of an individual team sport,” Smith explained. “I was finally able to be around the sport and practice every day. I fell in love and knew football was my passion.”

That was the year he met coach George Prelock, who was the head coach of the freshman team when Smith arrived at Notre Dame Prep. He’s now the head football coach. Despite a lack of experience, it was clear Smith was bubbling with potential. Prelock put him at outside linebacker and running back in ninth grade.

“He was the team-leading tackler as a freshman and was plenty physical enough to stay on defense. His speed and knack for staying on his feet forced us to focus him on offense. It’s worked out,” Prelock said with a laugh. “Jake has done everything we’ve ever asked of him, and you won’t find a person in this school with a bad thing to say about him.”

Smith’s sophomore year was a tale of two emotions. It represented his first time on varsity, though he’d played varsity baseball as a freshman. He wasn’t a starter as a sophomore, but he had a breakout game in the third contest of the season, rushing for more than 100 yards and scoring a touchdown.

“I felt like I belonged and had helped the team. It was against Desert Mountain, and that’s our rival. I was a nervous wreck before the game,” Smith admitted. “It was a huge crowd and they were a good team that year. I gained more confidence after that.”

The sophomore campaign was cut short due to a broken arm. Prelock watched his young star take it in stride and use the time to get bigger, faster and grow closer with his team and playbook. It was a preview of how maturely he’d handle the recruiting process once attention poured his direction following his record-setting junior season.

“Jake is an even-keeled kid, so I was proud of how he handled recruiting. It’s an overwhelming process for a 16-year old getting offers and attention from the top programs in the nation,” Prelock said. “I just told him to control what he can control and that’s his work ethic and grades.”

Smith is no longer focused on recruiting and says he’s 110-percent done with the process. He plans to sign during the early period but won’t enroll until the summer. Notre Dame Prep requires more credits than the average school in Arizona, which prevents students from graduating early.

That doesn’t mean Smith isn’t planning on contributing as soon as he arrives in Austin. He’s already scored 11 touchdowns in his first two games. Smith accounted for more than 400 yards and scored six touchdowns in the win over Sunnslope. He scored three touchdowns as a rusher, two as a receiver and returned a kickoff 75 yards for a score.

“Texas was the complete package,” he said. “It’s a place I can compete for a spot as a freshman. The campus is beautiful and a I really enjoy the coaches. No coach cared more about their players than Tom Herman during my whole recruiting process. My goal is to be the best athlete on the field and be great.”

Texas notebook: Starting kicker not yet named as Longhorns prepares for Maryland