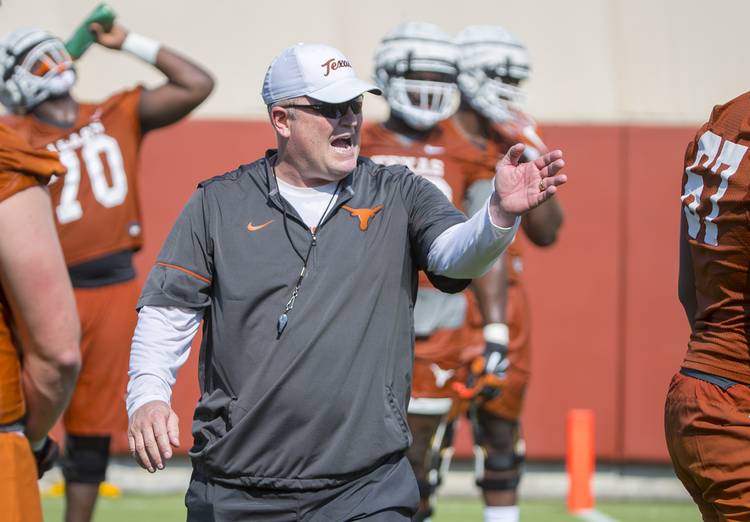 As the coaching staff switches its full attention to 2021, we continue to look at where the Longhorns stand at each position, continuing with offensive linemen. We’ve broken down the outlook at quarterback, running back, defensive line and linebacker in previous editions of The Dotted Line.

Texas must sign an impressive offensive line class to consider the 2021 cycle successful because of how much talent at that position is within the state borders. The list of targets is headlined by five-star Tommy Brockermeyer, the No. 2-ranked player on our initial Fabulous 55. The son of Texas-ex Blake Brockermeyer, Tommy is the total package at tackle despite missing his junior season with a shoulder injury. Texas must fend off the likes of Alabama and Clemson to keep him.

The Longhorns’ tackle position looks shaky with Derek Kerstetter set to move to right tackle. That leaves Cosmi, who is likely gone to the NFL after the 2020 season, and an unproven senior in Okafor. The Longhorns need recent signees like Jones, Moore and Hookfin to provide quality depth at the position or an injury could shake up the entire starting front. Don’t expect Garth or Karic to play as freshmen.

Keep an eye out for Miller. The Arizona product was teammates with 2020 running back signee Bijan Robinson. Texas already holds a pledge from Conner, a four-star from Katy Taylor. The Longhorns want at least three tackles in the class, especially if offensive line coach Herb Hand sees Garth as a guard.

One guard position is secure with Angilau returning after a solid redshirt freshman season. With Parker Braun out of eligibility, Texas appears to be moving Johnson, a former four-star tackle prospect from Conroe Oak Ridge, to guard. Johnson attended the same school as Texas star Joseph Ossai and is the highest-rated offensive lineman to sign with UT in the Tom Herman era.

Texas’ top target at guard is Foster. He’s a teammate of Katy Taylor tackle commit Hayden Conner and is a two-sport star who holds aspirations of reaching the Olympics in the shot put or discus. Jackson, who is the No. 1-ranked player on the Fab 55, is already committed to Ohio State.

Texas will move Kerstetter to center if the Longhorns can find the right piece at right tackle. He’d be backed up by Ghirmai, a four-star from the 2018 class, and Majors, a four-star who signed in December and is already on campus. Kerstetter is a two-year starter at right tackle and should be a suitable replacement for Zach Shackelford.

Another Brockermeyer is the top target for Texas at center. James, the twin brother of Tommy, is the only center prospect in the 2021 class to possess a Longhorns offer.