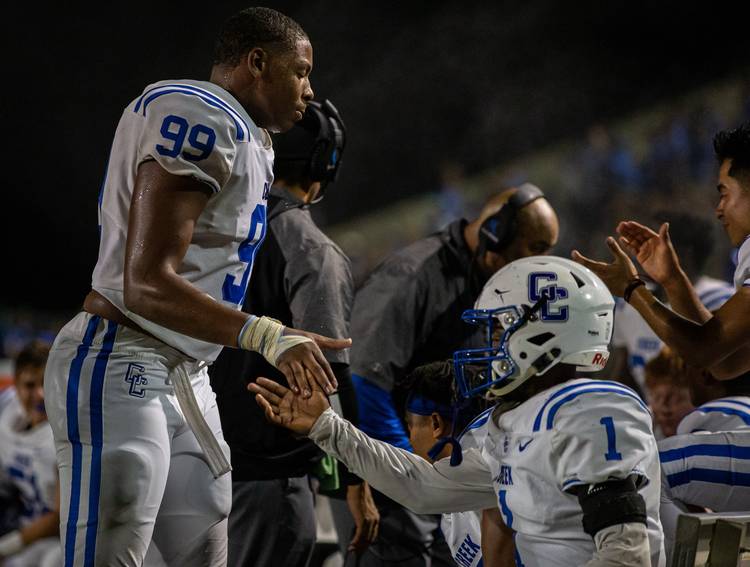 The impact of the early signing period in December is illustrated by the lack of uncommitted prospects remaining on the 2020 Fabulous 55. Only seven prospects remain without a school as national signing day inches is three weeks away. Most prospects elect to sign in December, but a select few remain, including a pair of top-20 prospects:

Off-field issues resulted in Evans being suspended for the Class 6A Division I state championship win over Duncanville. And his strong performance at the Under Armour All-American Game in Orlando was marred by news that Georgia had decided to reject his national letter of intent. That left the nation’s top-rated running back without a home. Character questions surround Evans, but there is no doubting his talent. He looks destined for College Station and Jimbo Fisher. He’s a future star if he matures and stays out of the doghouse.

Collins has insisted throughout his recruitment that he’d take his time, his visits and then decide late in the cycle. The big man held true to his word and remains the second-highest rated uncommitted prospect in Texas. Collins participated in the All-American Bowl in San Antonio, impressing with his rare combination of size and footwork. Texas hopes to pair him with four-star signee Vernon Broughton. The Longhorns are the favorites to land the local prospect.

Baylor was emerging as the favorite to land the talented dual-threat quarterback before head coach Matt Rhule left for the Carolina Panthers. Baylor has yet to name a replacement. That means Hornsby is back to square one. He’s a one-time commitment to Mack Brown and North Carolina. Purdue is also in the mix. Hornsby led Marshall to consecutive title games in Class 5A Division II.

Like Hornsby, Umanmielen was trending toward Baylor before Rhule left for the NFL. That puts other programs back in the mix, including Texas, a team Umanmielen had pledged to before the season. The local product backed off that commitment in October. Texas hopes the hiring of defensive coordinator Chris Ash, and the upcoming move to a four-man front, helps get Umanmielen back in the fold. Florida and Auburn are also in the mix. The Gators might be the leader.

Bradford keeps a low profile for a player who rushed for more than 3,000 yards in his prep career. The talented running back rushed for 1,563 yards and 23 touchdowns as a senior, adding 12 catches for 242 yards and three touchdowns. He’s explosive with legitimate track speed.

Dixon, the younger brother of Texas running back Keaontay Ingram, was focused on winning a Class 4A Division I state championship the week of the early signing period. He was pledged to Arkansas before the Razorbacks fired  Chad Morris. The Longhorns are the clear favorite, but don’t discount a run by UTSA because of new coach Jeff Traylor and his strong ties to East Texas. The Longhorns want another receiver after losing Quentin Johnston to TCU in December.

Crawford is a teammate of Dixon, and like Dixon he backed away from his commitment to Arkansas when Morris was let go. Arizona and UTSA recently offered, too, and Indiana and Purdue offered during the season. Crawford’s talent suggests he’ll be an in-demand prospect down the stretch.