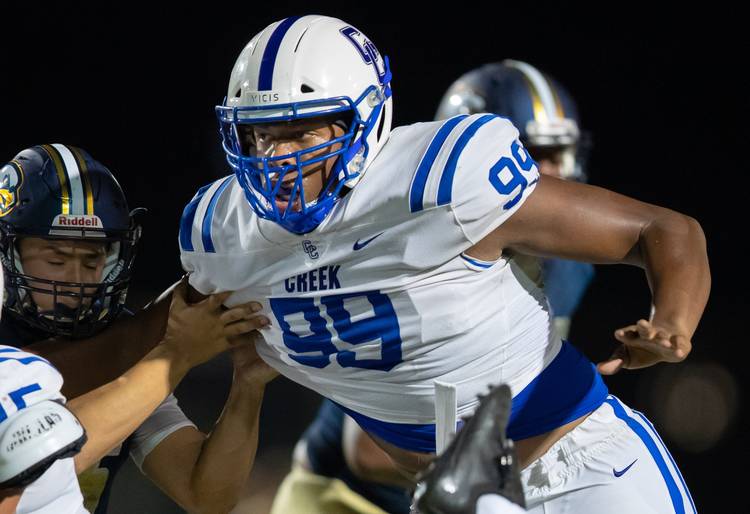 The 2020 class remains at 18 members and ranks sixth in the nation. It’s the top-rated class in the Big 12. It’s hard to imagine the Longhorns sneaking into the top five for a third consecutive year because it’s doubtful that Herman uses all 25 scholarships in this cycle, instead reserving a few for 2021 and the possible transfer market before the 2020 season.

The latest: Collins represents what would be a clean sweep of the top three defensive linemen in the state. The big man from Bastrop is in no hurry to make a decision, unlike most of his 2020 classmates. Collins attended the season opener against Louisiana Tech and made his way to Oklahoma this past weekend.

“This is the only time I get to do this,” Collins said of the recruiting process. “This is a big decision in my life. I’m going to take as much time as I need and make sure I’m picking the right school.”

Collins is set to take an official visit to Alabama in September and to Texas A&M on Oct. 11. The Longhorns want to add him to a defensive line class that already includes Vernon Broughton and Princely Umanmielen. There is no doubt that Collins is aware of Texas’ momentum.

“I talk to those guys and we do talk about taking over the Big 12 together,” Collins said. “But they know it is my decision and this is the time to be selfish with a decision. It is my life.”

Despite the visit schedule, Texas is the favorite to land Collins. The four-star lives less than 30 minutes from campus and his mom, Benita Pollard, played basketball at UT. Collins already plays in an odd-man front like the one utilized by Texas.

“I like the scheme because it allows me to attack multiple spots. I can play on the edge, or slide inside if that is where the offense is hurting us,” he said. “I’ll make my decision based on where I feel at home, not so much about position.”

The latest: Jordan is Texas’ to lose at this point, and it feels like when, not if, the Longhorns add the talented playmaker. He pairs well with five-star running back Bijan Robinson, who is a big, every-down back. Jordan is a Darren Sproles-like weapon with the ability to play some running back, slot receiver and help in the return game. He visited Texas to watch the LSU game.

The latest: We know Texas likes recruiting California. The 2020 class is without a commitment from the West Coast, though Buckley-Shelton could change that if UT puts on the full-court press. The Longhorns’ only wide receiver commitment in the cycle is Temple’s Quentin Johnston. Texas doesn’t need a large receiver class, but it needs to sign at least two. Johnston is the tall, big receiver in the class. Buckley-Shelton could be a nice compliment.

The latest: Ringo is the highest-rated cornerback prospect in the country. Texas trails Georgia but isn’t out of the fight. Texas needs more help at corner and I’d imagine the LSU game was recruiting material for Texas, considering Ringo would be in the running to start from day one in Austin.

The latest: This is a name to monitor. The long-time Ohio State pledge is among the top players in Texas and is the type of wide receiver the Longhorns want to sign along with Johnston. Smith-Njigba is the model of production, recording more than 83 receptions as a sophomore and a junior. He’s not on flip alert, but the Texas staff is still in contact.

Texas notebook: Linebacker Joseph Ossai is learning that to be successful, it takes being vocal