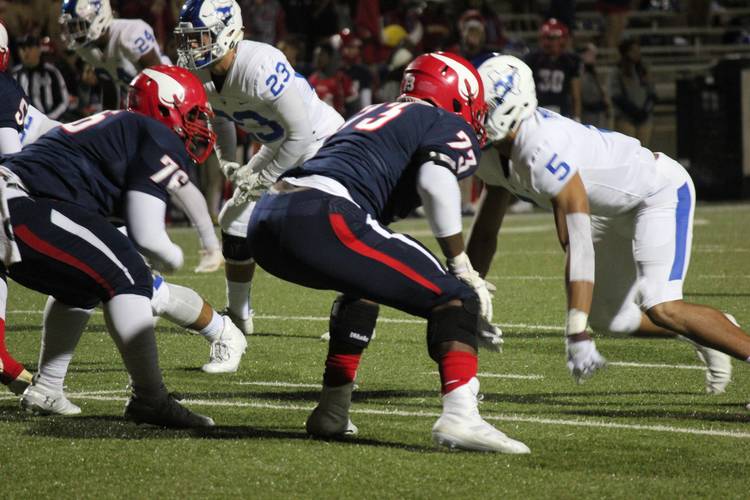 SUGAR LAND — Two of the state’s top senior offensive linemen squared off in the playoffs Friday night when Katy Taylor bested Fort Bend Dulles, 28-13. Taylor’s Andrew Coker, a TCU commit, is a member of the 2019 Fabulous 55 and holds an offer from the Longhorns. Dulles right tackle Isaiah Hookfin recently picked up an offer from Texas, too. Both are top targets of Tom Herman’s program as the early signing period approaches on Dec. 19.

“I might try and visit to UT. Focused on playoffs and school. Maybe TCU, but I’ll try to get to Texas,” Coker said of his visit plans. Nothing is set in stone for him in terms of visits. Texas remains in the mix because of the improved play of the offensive line unit under assistant coach Herb Hand.

The Longhorns possess commitments from a pair of linemen in the cycle. Both are Houston-area natives and four-star prospects — Tyler Johnson of Conroe Oak Ridge and Javonne Shepherd of North Forest. Hookfin and Coker would give the Longhorns a fearsome foursome of potential across the line of scrimmage.

All four are listed as tackles, but guard isn’t out of the question for Johnson and Hookfin. San Antonio O’Connor guard Logan Parr is one of two UT commitments in 2020. There’s no denying the impact of Hand’s success on the recruiting trail. Now, it’s time to close. Hookfin is considered a Texas lean and called Hand a “great coach who can get the best out of players.”

The two senior tackles weren’t the only stars on the offensive line Friday night. Top sophomores Bryce Foster and Hayden Conner share space with Coker, forming one of the top units in the state. Foster is a four-star guard while Foster is a four-star with potential to play right or left tackle in college. Both hold offers from Texas. Coker is a leader on the line and is already offering advice to his younger counterparts.

“I tell them to watch what you say and take it slow,” Coker said. “Look at the process and make the best decision for you, and not what everyone else says. That’s my best advice to any young recruit.”

Four-star wide receiver Jordan Whittington of Cuero is the forgotten star of the 2019 class. A high-profile recruit when he picked Texas over Texas A&M in the spring, his recruiting stock and hype slipped in the summer due to a groin injury. He missed the elite camps. He couldn’t play on the booming 7-on-7 circuit. The do-everything star focused on his health and his future. Whittington is now back from injury and is focused on taking Cuero to a state title in Class 4A Division II. The Gobblers began their run with a 66-12 victory last Thursday over Pearsall at Alamo Stadium in San Antonio.

“I’m proud of how we performed tonight. It was a complete team effort with our special teams playing well along with the offense and defense,” Whittington said. “We have big goals and we’re not where we need to be yet. We can’t get satisfied.”

Whittington is pegged as a future wide receiver in college, but he plays nearly everywhere in high school. He starts at receiver and safety. He touched the ball six times Thursday. He ended the night with two rushes for 101 yards and a touchdown, three receptions for 75 yards and two touchdowns and a two-point conversion pass completion. He’s a unique talent who is in the argument with outside linebacker De’Gabriel Floyd for the best prospect currently committed to the Longhorns.