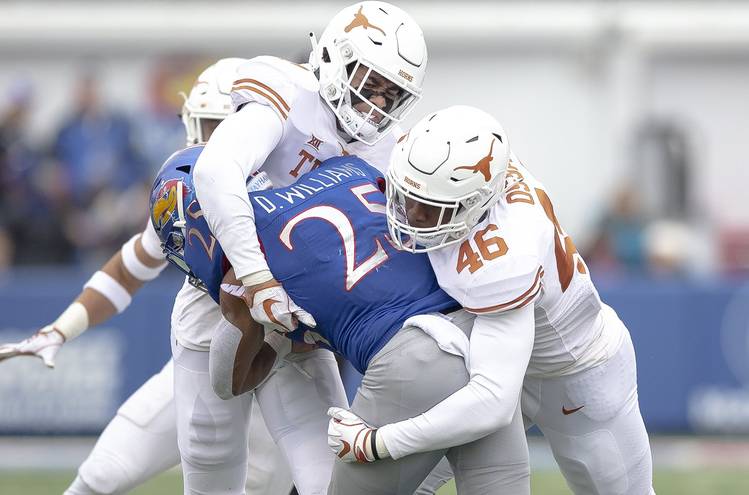 We graded the first seasons for the offensive players from the 2018 class on Tuesday. Here are the defensive grades.

The reason: Duh. Sterns was the Big 12’s  defensive freshman of the year — the seventh Longhorn to earn that award but the first since Malik Jefferson in 2015 —  and a first-team all-conference selection. He started 13 games. His nose for the ball and tattoos earned him the nickname of “The Wolf” and he hunted a lot in his first season, finishing with 62 tackles, four interceptions and a sack. He looked like a five-star talent and a three-year player by the end of the season.

The reason: Sterns’ remarkable season made what Foster did look pedestrian despite his productivity when he got on the field. Foster is already an enforcer for the defense and grew into the safety position after spending much of his prep career at running back. The former five-star and No. 1 player on the 2018 Fabulous 55 started five of the 12 games he played in and recorded 46 tackles, 2.5 sacks, nine tackles for loss and an interception. He also defended six passes and forced two fumbles.

The reason: Overshown was part of the three-man safety class that included Sterns and Foster. He played in nine games and recorded one tackle. Expect his role to grow as a sophomore.

The reason: Green wasn’t asked to help much defensively. He played in 11 games and recorded two tackles. He was a special teams contributor but will compete for the starting spots vacated by Kris Boyd and Davante Davis.

The reason: Cook participated in all 13 games and logged one start. He’s clearly a favorite to man one of the cornerback positions in 2019. Cook was ejected from the Sugar Bowl in the second half for targeting and will miss the first half of the 2019 season opener. That might be the only game he doesn’t start if he remains healthy. Cook recorded 18 tackles, defended a pass and picked up a sack in 2018.

The reason: Ossai established himself as the Longhorns’ next edge rusher late in the season. He can play B-backer or with his hand on the ground as an end, which is where he played in high school. Ossai played in all 14 games but truly came to life in the final four, beginning with Iowa State. He finished the season with 20 tackles and a sack.

The reason: Adeoye was another defender utilized in four games or less, allowing him to take a redshirt season while contributing late in the year. He debuted against Texas Tech and also logged snaps against Iowa State and Kansas as well is in the Sugar Bowl. He’s in line to start at one inside linebacker position with the departures of Anthony Wheeler and Gary Johnson.

The reason: Vaughns took a redshirt season in 2018.

The reason: Coburn was one of the freshmen to benefit from the new four-game redshirt rule that allows a player to compete in up to four games without losing a year of eligibility. He was deployed by the defensive staff late in the season, playing in three games and registering two tackles. He’ll be a redshirt freshman in 2019 and expected to compete for the starting spot left by Chris Nelson.

The reason: Williams was granted a release and is headed back to Louisiana to play at LSU.

The reason: Ojomo competed in two games and will enter 2019 as a redshirt freshman ready to compete for a spot on the two-deep at the nose tackle position alongside Coburn.