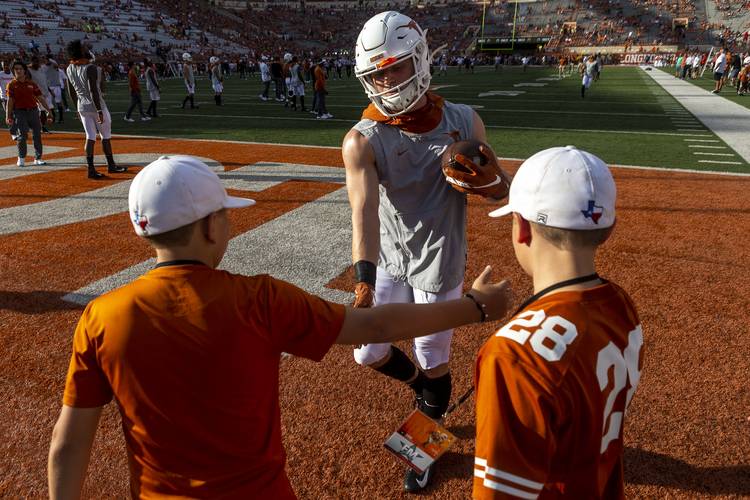 The class has already marred by transfers, position changes and injury. Here is the first-year report card for each player signed in 2019 class. We’ll look back at the defensive signees on Friday.

Johnson was Texas’ first 2019 commitment when he pledged in the summer before his junior season. The four-star was a dominant dual-threat quarterback at the prep level and was expected to redshirt behind Sam Ehlinger as a freshman. Instead, he saw an opportunity to contribute as a running back and took advantage with 123 carries for 649 yards and seven touchdowns. He added 23 receptions for 158 yards and a touchdown. His long-term position is still uncertain.

Whittington found a home at running back in preseason practices. But a sports hernia from his high school days never properly healed and the five-star athlete was forced to miss the season. He’ll be a redshirt freshman for the 2020 season. It’s unclear whether he’ll remain at running back or move to slot receiver.

Brown suffered a stroke one month before national signing day last year and needed multiple surgeries to recover. He is on campus and is expected to be cleared for the 2020 season.

The McCoy saga never lived up to the hype. The five-star left USC before the spring semester started and was counted toward Texas’ 2019 class when he signed and enrolled with the Longhorns last January. That bumped the class to the No. 3 national ranking and made McCoy the Longhorns’ highest-rated signee. But then he transferred back to USC following spring practices.

Smith was on his way to an A grade before he hit a wall midway through his first year. He watched fellow slot receiver Devin Duvernay lead the nation in receptions and is the obvious choice to take over Duvernay’s role as a sophomore in 2020. Smith caught 25 passes for 274 yards and six touchdowns.


Washington played often enough to lose his redshirt in 2019. He’s poised to become one of the top wide receivers on the roster, possibly starting opposite of Brennan Eagles in 2020. Washington recorded three catches for 33 yards.

Liebrock took a redshirt in 2019. He participated in three games but didn’t record a reception.

Wiley emerged as the best blocking tight end on Texas’ roster as a freshman. The former prep quarterback earned two starts and played in every game except for Oklahoma State. The one catch for 15 yards doesn’t pop off the screen, but his ability to block was a key component for Texas.

Shepherd, a four-star tackle, entered the transfer portal in the middle of the season.