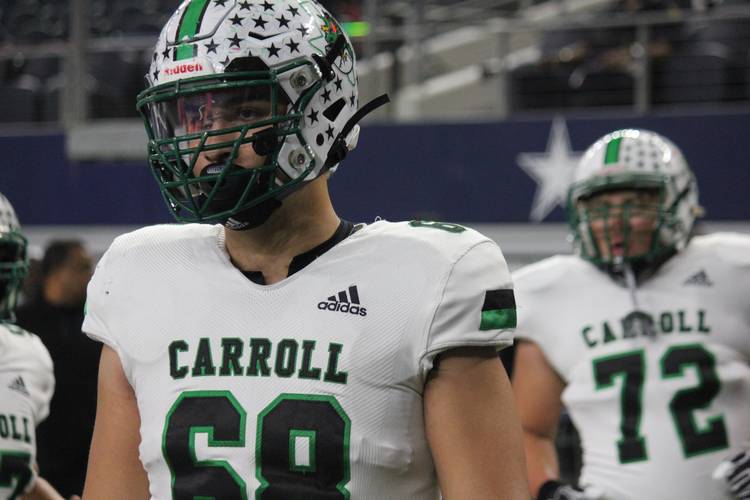 It’s playoff time in Texas and that has provided me with a chance to watch a handful of Texas commitments and targets in must-win games across the state. Texas’ 2020 class stands at 18 commitments, ranking eighth in the nation and first in the Big 12. The 2021 class already consists of seven members and is currently ranked fourth in the country.

Here are some in-person scouting reports on the next group of Longhorns.

The setting: vs. Leander Rouse, Nov. 8

Harrison ended up hurting his foot and missing the playoffs. Luckily, I caught the newest Texas commit on the final week of the regular season. He caught six passes and a touchdown in that performance, nearing 100 total yards of offense. He also played some defensive back, which is why I consider him an athlete. His explosiveness is obvious, and his future is likely at slot receiver and in the return game. Harrison is ranked correctly, as he’s a three-star with plenty of upside.

This was my second time watching Milroe play in person as a junior. I also watched him once as a sophomore. Milroe showed maturity in the playoff win over an undefeated Travis squad. He struggled in the first half, throwing three turnovers. Milroe regrouped at halftime and ended the game with four touchdown passes. The four-star is a pass-first quarterback with some running skills. It’s his reputation as a winner that Texas truly covets.

The setting: vs. Richmond Foster, Nov. 15

Harris and his New Caney teammates were upset in the bi-district round of the playoffs. It wasn’t the fault of the defense. New Caney’s offense managed only three points in the second half. Harris is a unique defender and his long-term position will depend on how much his body fills out over the next two years. He could be a B-backer or grow into a traditional defensive end.

Dorbah is the best edge rusher in the state. He recorded 30 combined sacks as a sophomore and a junior, and he’s once again leading Highland Park in that category as a senior. Dorbah is undersized for a defensive end, which is why Texas plans to use him as a B-backer. The Longhorns did the same thing with Joseph Ossai, who played with his hand on the ground at Conroe Oak Ridge. I expect Dorbah to contribute on pass rushing situations as a freshman. He’s best in the big games.

Karic was a relative unknown entering his senior year at the top levels of recruiting. He’s grown, literally, into an elite tackle prospect after gaining 30 pounds after his junior season. The former defensive end is agile for an offensive tackle and he doesn’t lack the hard-nosed physicality Texas desperately needs along its line. Karic will be a new member of the 2020 Fabulous 55 when the list is updated in December. He took on junior defensive end Shemar Turner of DeSoto and won most of the matchups in the area-round win.

Adeleye omitted Texas from his final five and says he’ll commit in January. His teammate, Milroe, is pledged to UT and is still in his ear.

There is still a year until the junior class can sign and a strong 2020 season by the Longhorns would help with prospects like Adeleye, who are favoring teams like LSU, Oklahoma and Alabama. He’s the best defensive lineman in Texas for the 2021 cycle.

The setting: vs. Southlake Carroll, Nov. 22

Tuner is a future member of the 2021 Fabulous 55, but he drew a tough matchup against Southlake Carroll. Not only do the Dragons rely on a quick passing game that prevents pass rushers from getting home, but Southlake Carroll is also the home of UT offensive tackle commit Andrej Karic. It was a tough day for Turner, who is still growing as a football player. His upside is tremendous and it’ll be exciting to watch him progress heading into his senior season.

Ewers is the priority for Texas at quarterback in the 2022 class and it doesn’t take many snaps to understand why Tom Herman and his staff are so high on him. Texas isn’t the only team aware of his potential. The sophomore already holds offers from Alabama, Ohio State and Texas A&M. He’s the top sophomore quarterback in Texas and he looked like an upperclassman when he dissected a talented and athletic DeSoto secondary in an area-round win.