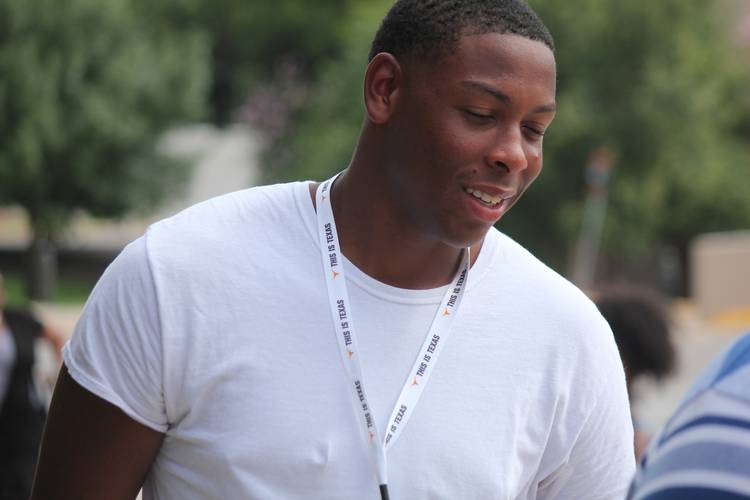 As of Tuesday morning, Texas’ recruiting class remains at eight members after the commitment of four-star Arlington cornerback Jahari Rogers to Florida and the postponement of four-star defensive tackle Vernon Broughton’s decision, which could still come this week. Texas is in a battle with Texas A&M and Ohio State for Broughton, the state’s top defensive lineman.

The Longhorns are expected to win out, which would add to the recent momentum built on pledges from Prince Dorbah and Ja’Quinden Jackson.

Texas is nowhere done recruiting the 2020 cycle, though. Here are predictions for the eventual destinations of six targets remaining on the board. Texas is the best bet for Broughton.

It feels like a matter of when, not if, Lindberg joins Texas’ offensive line class for  2020. He’s the best pure tackle prospect from the state with current commits Logan Parr and Jake Majors set to move inside. Jaylen Garth also may end up at guard once he’s on campus, so that makes gaining Lindberg the top priority for the Texas staff. He would be Texas’ top-rated offensive line signee since Tom Herman took over during the 2017 recruiting class.

Texas did everything it could to challenge the West Coast schools chasing Wilson when the long, rangy receiver took an extra-long visit to Texas at the end of June. It coincided with an appearance at The Opening later that week. Texas is a real contender for Wilson after showing him that the Longhorns utilize tall wide receivers like Collin Johnson. This one likely goes into the season, and Texas is right behind Oregon in the pecking order. Wilson becomes a legitimate target if the Longhorns can get him back on campus this fall for a home game. He’d be a welcome addition with in-state receivers Demond Demas and Troy Omeire already pledged to Texas A&M.

Thompson will announce his decision on Aug. 1 and it will be a surprise if he doesn’t join Duncanville teammate Ja’Quinden Jackson in pledging to Texas. The Longhorns have been a long-time pursuer of Thompson, who is a physical safety with coverage skills. He even played some outside linebacker as a junior and his frame suggests that he could easily get to 220 or 230 pounds once he’s in a college weight program. Thompson impressed in coverage as a late addition to The Opening Finals roster.

Texas can’t afford to lose Collins, a big-bodied defensive lineman just up the road from campus, in Bastrop. His mom, Benita Pollard, played basketball at Texas in the 1990s. With his late start to football, Collins is the definition of untapped potential. He grew up expecting to play college basketball. His big frame continues to fill out, and he may become a defensive tackle by the time he finishes growing. Some even suggest an eventual move to offensive tackle if he reaches 6-8. It’s a two-team race between Texas and Texas A&M with the Longhorns slightly in the lead.

There might not be a tougher four-star prospect to read. Johnston does a great job of avoiding the spotlight and social media. It’s likely he holds many more offers than the eight he’s reported. He’s a three-sport star who didn’t focus on recruiting until this summer since he was busy with basketball and track as a junior. Johnston plans to take his time, and his official visits, before picking a school. With Demas and Omeire committed to A&M, Johnston becomes a higher priority within the state. He’s a freakish athlete with a big, long frame.

It’s a three-team race for Umanmielen with Texas and A&M beginning to separate from Oklahoma. The big-bodied end is scheduled to commit on Oct. 14. He’ll take an official visit to A&M the week before. The Aggies are trending in the right direction for him because of scheme — Texas uses an odd-man front at least half of the time on defense, while A&M’s base is the typical four-man front. Texas’ scheme asks defensive linemen to occupy blockers and take on double-teams on a more regular basis than a four-man front. Umanmielen expressed his preference to play in a four-man front at The Opening Finals earlier in the month.