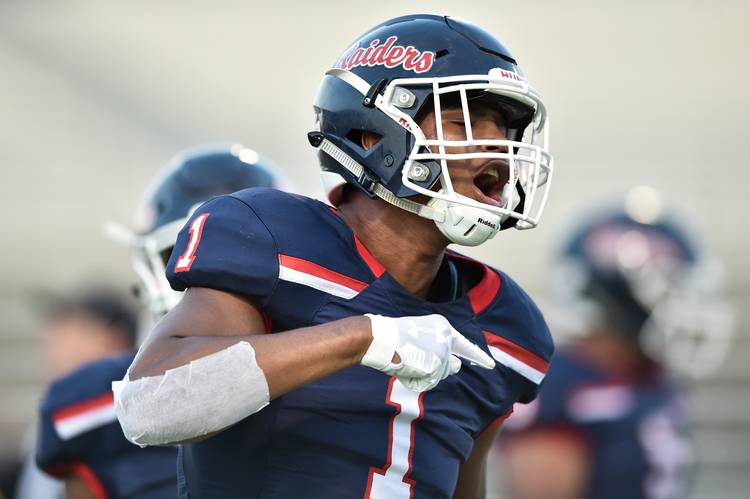 DentonRyan defensive end Ja'Tavion Sanders should play on defense for the Longhorns once he's on campus. (Jeff Woo, Denton Record-Chronicle)

Sanders is a freak of nature who can pick whether he wants to pursue a football career at wide receiver or defensive end. His frame suggests a higher-upside at defensive end, where his lack of top-end speed won’t be a negative. He’s a big, long defender with enough athleticism to develop into a pass rushing phenom.

Sanders would need to improve his physicality to become an elite three-down defensive end, but the tools are there for him to succeed and become a future NFL draft pick on defense. Sanders does enjoy playing wide receiver, so that isn’t out of the question for a player who’d be considered the top tight end prospect in the 2021 recruiting class.

Bowman does everything for Denton Ryan, a program that reached the Class 5A Division I state championship game in 2019. He excels at safety, earning all-state honors as a freshman and continuing his dominant play in the past two seasons. He’s also a weapon at wide receiver, averaging a touchdown every third reception. Defensive back is the money position for Bowman, but it wouldn’t shock me to see him carve out a role on special teams and offense, much like D’Shawn Jamison did as a freshman before moving back to cornerback in 2019.

The Port Arthur Memorial prospect picked Texas over Texas A&M. He missed his junior season with a lower leg injury after earning second-team all-district as a sophomore when he recorded 32 tackles, including seven tackles for loss and five sacks.

Thomas is a big-bodied defensive lineman with a long-term future as a three-technique defensive tackle as he continues to grow. His best football is in front of him as a raw, rusty prospect who needs more time on the field to refine technique. Thomas carries little body fat and could easily grow into a defensive tackle. His ability to play the strong-side defensive end spot and move inside give him the positional versatility that the current Texas staff appears to crave. Most of the current top targets on defense are players who could play at least two positions. Thomas is a high-upside prospect with the ability to become a playmaker with more coaching and real football snaps.

Harris is a long, lean athlete with the ability to play outside linebacker or grow into a defensive end as he adds weight to his frame. Harris does his best work when he’s let loose to attack the football off the edge, leading to the idea that Harris is likely to land at B-Backer like Joseph Ossai and 2020 commit Prince Dorbah, both of whom were more pass rusher than linebacker in high school. Harris can play off the line of scrimmage and he should only improve in space as an upperclassman. He’s an incredible athlete with high-upside.

Blackwell was awarded a fourth star with this month’s 247Sports composite rankings. Blackwell is a 6-1, 196-pound tackling machine. He was the District 4-6A Defensive Sophomore of the Year in 2018, and he backed that up with the District 4-6A Overall MVP as a junior. He’s recorded at least 112 tackles in both of his varsity seasons, adding six forced fumbles and three interceptions. He’s also recorded two sacks in each of the past two years.