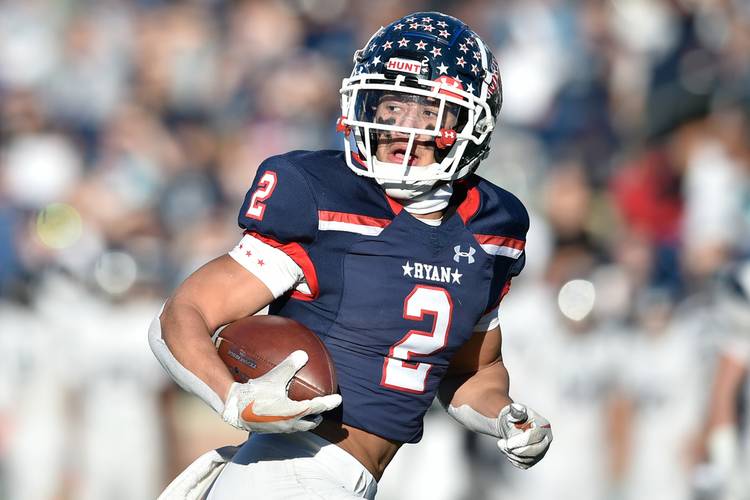 Another early recruiting update changed the rankings of Texas’ 2021 class that currently consists of six in-state prospects. Five of those players are ranked on the initial Fabulous 55. The 247Sports composite rankings recently updated to award one of the six commitments a fifth star. Four of Texas’ commits rank within the top 150 prospects in the nation after the recent update.

The class ranks seventh in the nation and first in the Big 12. Tom Herman is hoping to sign his fourth straight top-10 class.

A closer look at Texas’ six pledges and their current, updated state and national rankings:

Sanders is a two-way star with upside on both sides of the football. He starts at wide receiver and defensive end for Denton Ryan, a Class 5A Division I state finalist in 2019.

Sanders is most likely destined for defensive end. He earned first-team all-district honors at the position as a junior and was newcomer of the year in District 4-5A Division I as a sophomore. He’s the 21st-ranked prospect in the entire 2021 class, per the 247Sports composite.

Bowman was moved to the sixth spot in the state on the 247 composite, again matching his ranking on the Fab 55. He’s another two-way starter for Denton Ryan, playing slot receiver and safety at an all-district level. He’s also a special teams ace as a returner.

Bowman is the second-ranked athlete in the country, trailing only Sanders. He’s ranked 37th overall in the nation. He earned all-district honors at wide receiver as a freshman and was first-team all-state as a defensive back as a sophomore. The best guess is that he winds up playing slot receiver in Austin.

Milroe is now the 79th-ranked overall prospect in the 2021 cycle, giving Texas three commitments inside the top 100. He’s the fifth-ranked dual-threat quarterback and 11th in the state, one spot off of his Fab 55 ranking.

Milroe is a winner, leading Tompkins to its first two playoff appearances in school history. He’s a pass-first quarterback, throwing for 2,689 yards to just 378 on the ground as a rusher. He’s accounted for 57 touchdowns in two years as a varsity starter.

Harris is another commitment who’s now ranked similarly by the 247Sports composite and the Fab 55. He’s 25th in the state on the composite ranking, one spot above his Fab 55 spot. He’s the 11th-ranked outside linebacker and the 148th-ranked overall prospect in the nation. Harris was named all-district as a junior and newcomer of the year as a sophomore in District 9-5A Division I.

Harris is a pass rusher who could grow into a defensive end in Texas’ new four-man scheme. He recorded more than 80 tackles the previous two seasons and has 8.5 sacks and 38.5 tackles for loss in his two-year varsity career.

Conner is Texas’ lone offensive line commitment in an important cycle at the position due to the amount of sheer talent within the state. The top two players on the Fab 55 are offensive linemen, including UT target Tommy Brockermeyer.

Conner ranks higher on the Fab 55 than on the recent composite update, which ranks him 42nd in Texas and 273rd nationally. He’s a two-time all-district selection and a prospect who can play tackle or guard. He’s also among the smartest prospects in Texas, choosing the Longhorns in part because of the school’s aerospace engineering program.

Davis is the lowest-ranked UT commitment, but it isn’t for a lack of talent.

Everman isn’t a powerhouse in Dallas-Fort Worth and he’s yet to play one position long enough to get a solid scouting report. Davis earned first-team all-district honors as a sophomore after recording 41 catches for 499 yards and seven touchdowns. He moved to quarterback as a junior. Most view him as a future tight end in the mold of Malcolm Epps. He ranks 446th nationally and 60th in Texas, per the updated 247Sports composite.